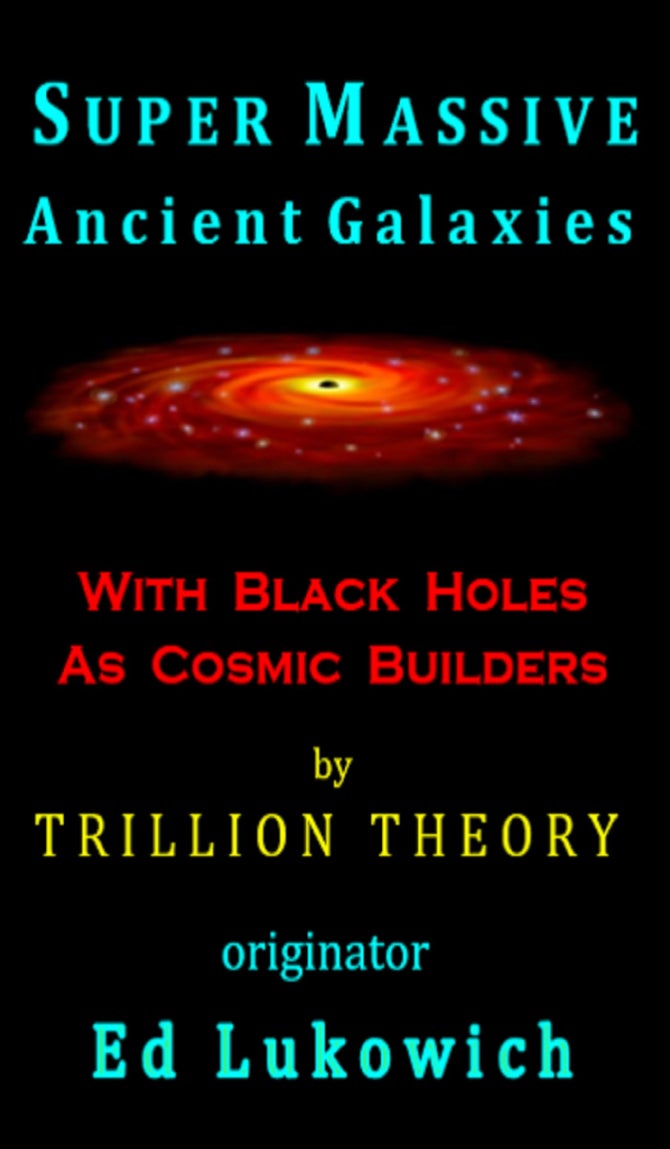 Trillion Theory (the new theory by founder/theorist/author Ed Lukowich) is summarized in this book ‘Supermassive Ancient Galaxies’. This new Trillion Theory depicts its estimated ancient trillion year age and origin for our cosmos. Delving deep into humongous galaxies, TT examines the work done by the galaxy builders, which TT purports to be black holes. At the hub of each and every galaxy is a Supermassive black hole which controls all of the millions of solar systems within the galaxy, along with the millions of black holes doing their dutiful tasks of recycling the solar systems for each new 15 billion-year generation. TT says, 'That is why it is near impossible to spot a sun older than 13-14 billion years.; and why astronomers have been mistaken in estimating the age of our cosmos at only 13.7 billion years when viewing the current generation crop of suns and solar systems.'  TT states that an ancient Supermassive black hole at the hub of galaxy may have started building its galaxy as far back as 800 billion years in the trillion-year cosmos. While the Supermassive black hole is ancient, its occupant solar systems die and spawn new solar systems once their star reaches the 10-14 billion year age and goes supernova. Our cosmos is akin to a forest which recycles old trees and spawns the next generation of trees. Quadrillions of black holes, varying in a multitude of sizes, are both the builders and the controllers of the solar systems and the galaxies of our immense cosmos. TT says, 'We indeed have plenty to discover and prove about our universe. Trillion Theory is pointing out the direction to be taken.'
Author Bio
Ed Lukowich is founder/author of TRILLION THEORY, with 6 books in the non-fiction cosmology series; all in paperback, ebook and PDF forms. Ed Lukowich, is a Canadian cosmology writer of a new enthralling non-fiction universe theory entitled Trillion Theory series, which consists of 6 book in the series, comprised of: Trillion Theory (1st book); Trillion Years Universe Theory (2nd book); Black Holes Built our Cosmos (3rd book); T Theory Says: Who Owns Our Universe (4th book) Spinning Black Hole Inside Our Earth (5th book) and Supermassive Ancient Galaxies (6th book; a summary book) in the completed Ed Lukowich cosmology series.
Ed is also the author of a super futuristic sci-fi novel entitled The Trillionist (under pen name Sagan Jeffries) which depicts the despicable actions of an older-than-dirt entity which deviously manipulates its planet along a path to disaster.
Ed is a former World and Olympian curler and National Coach turned sci-fi cosmology writer. See website www.trillionist.com for all of his cosmology and futuristic paperback books and e-books

You will get a MOBI (8MB) file