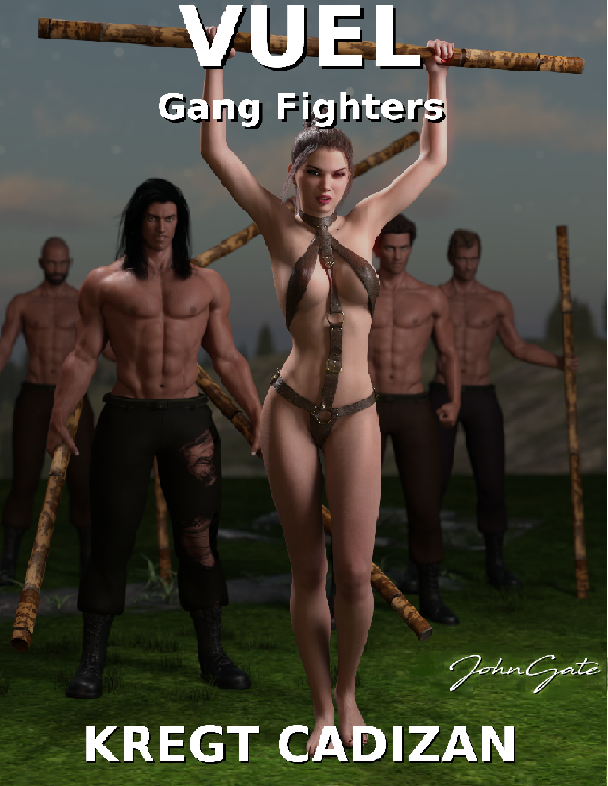 On Sale
$7.75
$7.75
Added to cart
The 3rd in the VUEL series tells the history of the native vuelans.
This is Sci Fi for adults. No girls with swords. Earth humans taken by an advanced civilization to populate another planet. The planet is coveted by other civilizations and must be defended. The planet is Vul, life there is called VUEL

Wazja, Murgad Viya and Osieo
Aja, a young vuela  serves a rookie gang fighter= I read his suspicions about the fighters in the games, “you believe that your opponents are not revealing their full talents?”
Murgad took a long sip from his chalice. “No. I do not.” Then he looked at me. He had the intuitive ability to anticipate a threat and he was unsure of me! I waited for his question as if I was a cornered animal, unable to evade his net, I smiled, letting him know that I welcomed my capture. He said, “you, also, are not what you present yourself to be.”
He believed that I was more than a serving vuela, “you are kind, lo Murgad.” This was not the end of his inquiry, though. He waited, the next words spoken would have to come from me. Now I took a long sip from my chalice, “you are perceptive. I was recognized as possessing the attributes of a vuelessa several annaros ago. That is why I was drawn here.”
Murgad smiled. What I told him had opened more questions. Now I was a trapped animal. I had no options and could only finish my explanation, “I gained fifteen annaros and my family gave me the deen to come here to the Domesticate. I was unable to obtain an examination, and having spent all of my deen to come here, I was fortunate to find this work here in the Road House so that I would not starve.”
Murgad nodded. Then he said, “how is it that you know what is in my mind?”
----------
Brand finds himself locked to a platform in Centium= On the second brightness I had not been fed and the bowl of water was empty when a beautiful vision walked up. This young vuela was no hallucination. I was afraid to look at her but could not look away. The vuelans on the plaza called to her. They did not want her to approach me. Then, unbelievably, she leaned down and said slowly and softly, in English, “just nod. Are you from Earth?" \
----------
Aeia describes the Gang Fights= The Vuelessa of Centium is always guarded. My protector, Murgad, is well known everywhere on Vul as a gang fighter. Gang fights are the predominant sport in vuel. The contest is held in the largest stadia on Vul. All vuelans attend. The contest does not have the usual distraction of moving a ball across a field. The object is to maim, injure or kill the fighters on the other team. It is a brutal contest. Females of Earth, including myself, usually become physically sick while viewing the contest.
----------
Loee is on the corsair ship= We sailed away from the Great Bay, through the wreckage of the armada for the remainder of the brightness. No more of the spears of fire were sent from the high bluff. Captain Delmar released the horde leader on his ship, Djorbun, telling him, “you may swim for the bluff with your vuelen if you wish.” Djorbun had been watching as tiburos began to pull the floating bodies of the horde vuelen under the mar. Some of these vuelen were alive and trying to swim for the bluff when the tiburos took them under. Their screams disappeared into the mar with them. I could not watch this happen but I could not prevent the thoughts of the marujos that were watching, from reaching my mind.
----------
Young vuelessa Oseio must recruit the gang fighters= The fighters agreed with my rage. “there will be a gang fight in Refurio! I will lead whoever wants to follow me into that arena! I will lead as the forfeit slavuela for Centium! I will be the forfeit slavuela because if Refurio is allowed to dictate terms to Centium, then I am already a slavuela!”
You will get a PDF (2MB) file