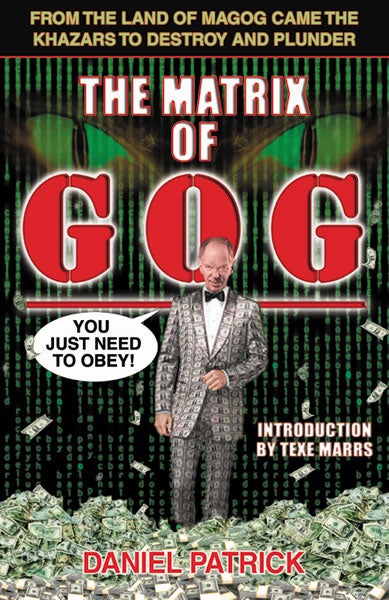 (Kindle) The Matrix of Gog: From the Land of Magog Came the Khazars to Destroy and Plunder

Has Gog, from Magog, already conquered the Land of Israel?

Ezekial 38-39 prophesies that in the last days, Gog, demonic ruler of the land of Magog, shall come against Israel, which is brought forth out of the nations. He shall come like a storm and shall conquer this land of unwalled villages, and take them hostage.

This conquest by Gog and his army will eventually spiral into a bloody global war so catastrophic that God, Himself, will finally put an end to it.

Who is Gog? Where is the land of Magog? Now, with new and astonishing archeological and genetic discoveries, we have amazing evidence that, in fact, Magog is situated in Southern Russia, in the Caucusus, and Gog is the name of the great ruler of the Kingdom of Khazaria. Khazaria is the land of the non-Semitic, Turkic peoples who falsely claim to be Jews. From Khazaria, in the eighth century, these pagan peoples, having converted to Judaism, fled to Europe to escape invading Russian warriors.

In 1948, the Khazarians went on to Palestine, where they conquered the peaceful Palestinians and set up a pretentious, new "Kingdom of Israel." The Khazarians, claiming to be "Jews," are from Magog. Led by Satan's Gog, in the last days they are destined to plunge the entire world into bloodshed, chaos, and war. Ezekiel 38-39 is fulfilled in front of our eyes!