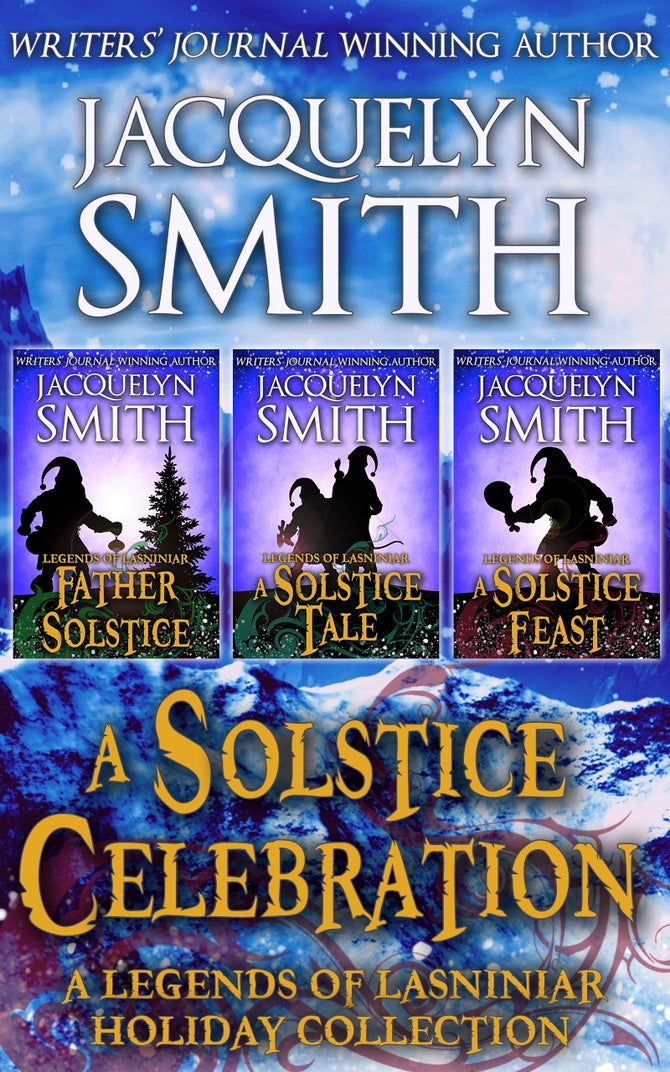 Nothing ever seems to go according to plan when the Iarion and Barlo travel at this time of year...

No matter how hard the elf and dwarf try, they always end up on the business end of a mystery that only they can solve.

Join the unlikely pair of friends on a trio of holiday misadventures in this collection from the World of Lasniniar epic fantasy series by award-winning author, Jacquelyn Smith. This collection includes three connected shorts:

Legends of Lasniniar: A Solstice Tale

Legends of Lasniniar: A Solstice Feast

Solstice Eve. An unexpected side trip. Barlo and Iarion find themselves looking for a room in the human city of Nal Huraseadro to take shelter from the snow.

During their journey, Barlo only seeks the answer to one question. What did his elf friend get him for Solstice? His endless guesses border on harassment. Iarion refuses to budge.

Despite the approaching holiday, not all remains peaceful in the city.

A stand-alone story from the World of Lasniniar epic fantasy series. If you love a lighthearted holiday misadventure, grab this book.

A Solstice tradition in the making. Barlo and Iarion return to the human city of Nal Huraseadro for the holiday.

This time, Barlo’s nagging guesses about his Solstice gift must wait. Both he and his elf friend plan to find something under ten silvers within the city itself as a challenge.

They arrive to find things changed since their last visit. But some things stay the same. Nothing can stop the pair of friends from finding trouble.

...Even on Solstice Eve.

A fun, holiday short novel from the World of Lasniniar fantasy series and a follow-up to “Legends of Lasniniar: A Solstice Tale.”

A Solstice tradition continues… Once again, Barlo and Iarion travel toward the human city of Nal Huraseadro on their way to Dwarfhaven.

The dwarf and elf make an effort to spend the holiday in the city every time Barlo’s rounds to the other dwarven outposts bring them to the area. The trips consist mainly of banter and misadventure. The perfect way to spend Solstice.

Only this time, their journey takes them on an unexpected detour.

A fun holiday story from the World of Lasniniar fantasy series and a follow-up to “Legends of Lasniniar: Father Solstice.”