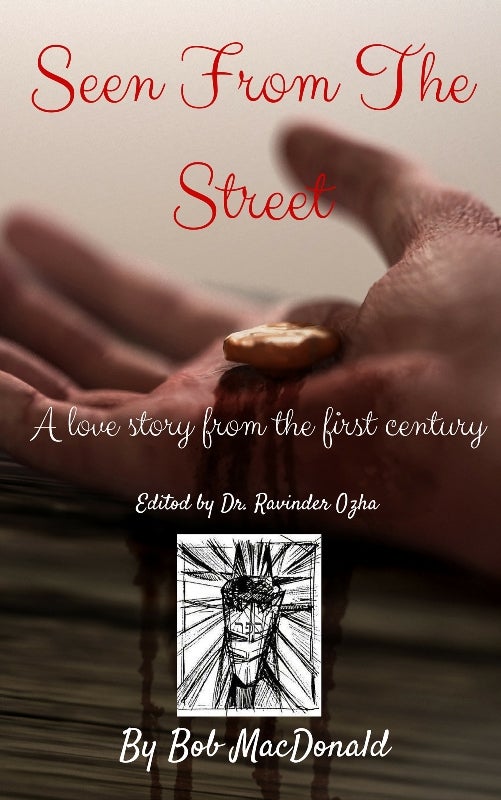 Seen from the Street: A Love Story from the First Century

ABOUT THE BOOK – BY THE AUTHOR

I wrote ‘new’ recording – not new faith. In line with several post-Shoa scholars, I have examined the Jewish aspects of first century Christ-believers and I have portrayed the Gentile relationships to them in the areas of love and desire for intimacy. Writers who have seen some of my chapters delight in the gentleness of the dialogue. Some comments:

The language is gorgeously appropriate, very clean and very rich. The letters present an innovative take on an old story. The concise sentences and simple language lend the ideal cadence to engage the subject matter. There’s a passion to your writing. It speaks volumes about your love. The subject matter will speak for itself. Don’t change things to appeal to a market.

I loved this chance to glimpse life in a time that has had little voice in our times aside from the Bible. It is beautiful, honest, and real. Your sentences give such a sense of purity and nourishment, evoking how one would feel. I grew up in Jerusalem. I felt I was there in that ancient world. Your portrayal of the Jewish love of Torah is accurate and sensitive.

The story is in 49 chapters in 7 parts which themselves reflect the critical abstraction of the religious life: Covenant, Law, Gospel, Sacrifice, Baptism, Sin, and Glory. The seven form a concentric structure. Chapter 25 – the overall centre of the book, is a reconstruction of the dialogue of Jesus with the elders (Hillel and his student Gamaliel) in the temple in the year 6 CE. The story of the crucifixion is told independently by two characters that meet in the scuffle around Simon of Cyrene: Mayim (Hebrew, waters) of Galilee looking for completion of post-partem purification, and Rufus, the child of Simon who recounts his childhood in his old age. Two dialogues in prison illustrate the psyche of one of the major characters. These four stories (chapters VI Dialogue with the Advocate, and VII Rufus in Antioch, and chapters XLVI The Glory of the Covenant, and XLVII Dialogue with the Accuser) provide double book ends for the middle chapters.

The centers of the first and last sections (chapter IV The Covenant with David, a reconstruction of a Galilean circumcision ceremony, and chapter XLVI The Glory of the Covenant) are paired to illuminate the similarity of the sign and actuality of both old and new covenants. The premise is that the gospel to the nations is a Jewish concept based on the Tanakh and not a new religion. The non-religious will perceive it as a religious book. The religious should see their faith in a new light freer from the accretions of Augustine, Anselm, and Luther. The story raises and reframes questions rather than answering them.

The middle chapters of the story reflect the tensions in the early believers and the many factions in the Judaism of the time. Also illustrated are the process of the creation of texts, the Gentile mission, and the collection from the Gentiles for Judea; life and death in Roman Galilee, Jerusalem in the 20’s, conflicting calendars, some events of the gospels as seen from the point of view of Galilee and the Diaspora; mentorship, growth in faith, schooling, and business dealings in the empire, medical knowledge and practice, bandits, slavery, eruptions, earthquakes, and the life of faith.

There are about 80 characters. The timeline is about 110 years with references to some events prior to 6 CE. I have included both the positive aspects of human desire as well as issues of healing and abuse (fetal alcohol syndrome, residential school experience) that are I think particularly important in our day. I have also included issues around homo-eroticism that disturb our current society. As in our age, some grasp the avoidance of judgment and the need for forgiveness and others demand blood and conformity to custom. I hope the gentleness can be communicated to many.