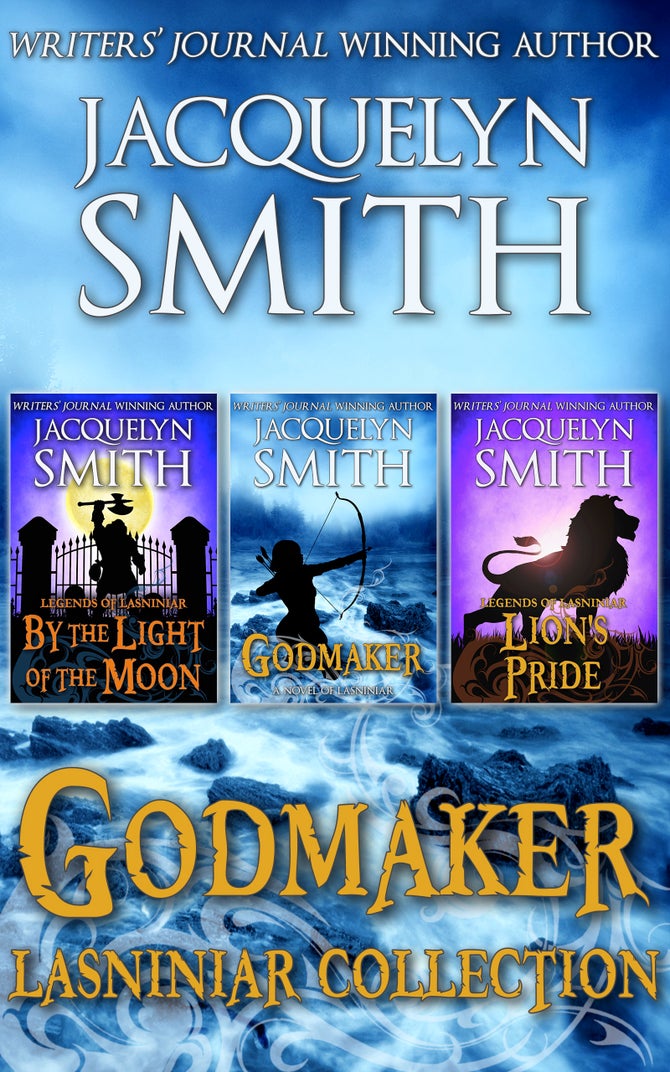 By WaywardScribe Press
Gods roam the lands of Lasniniar. But not all of these new deities come in peace.

…And in the chaos that follows, dark creatures wander at will.

Join Iarion and Barlo as they face darkness and divine power in this collection that introduces a new hero in the World of Lasniniar epic fantasy series by award-winning author, Jacquelyn Smith. This collection includes one novel and two shorts:

Legends of Lasniniar: By the Light of the Moon

Now the humans of Lasniniar worship the host of lawless, magical entities as gods—fueling the Unborn spirits’ insatiable hunger for power while sowing the seeds of chaos.

Iarion finds himself at the center of the would-be gods’ attentions. Attentions that border on obsession.

...And not all of their interests prove friendly.

A new era begins as Iarion and his best friend Barlo struggle for survival on a journey that takes them beyond the known boundaries of the World of Lasniniar in this sixth novel in the epic fantasy series.

Legends of Lasniniar: By the Light of the Moon (Short Story)

No matter where their journeys take them, Barlo and Iarion always seem to find trouble.

The eve of the Harvest Festival. The dwarf and elf pair find themselves potentially lost on the way to the closest human village. A blanket of mist drifts from the nearby hills to obscure the dirt road as night closes in.

Barlo remains content to let Iarion lead the way. At least then he can blame his elf friend if—no when—things go wrong. Still, Barlo’s hand stays close to his ax.

What danger lurks in the darkness beyond the mist?

The infamous duo of Barlo and Iarion return in this spooky, stand-alone misadventure story from the World of Lasniniar epic fantasy series.

Half human. Half feline. All warrior.

Her very existence a crime, Nofret lives in a hidden refugee village—safe from the magic and might of the Lion Folk who rule the island in the name of their cruel goddess.

But Nofret grows tired of hiding. She yearns to do something more. Surely her fighting and tracking skills can serve a greater purpose?

Her noble heart can accept nothing less.

A stand-alone origin story adventure from the far-flung reaches of the World of Lasniniar epic fantasy series.