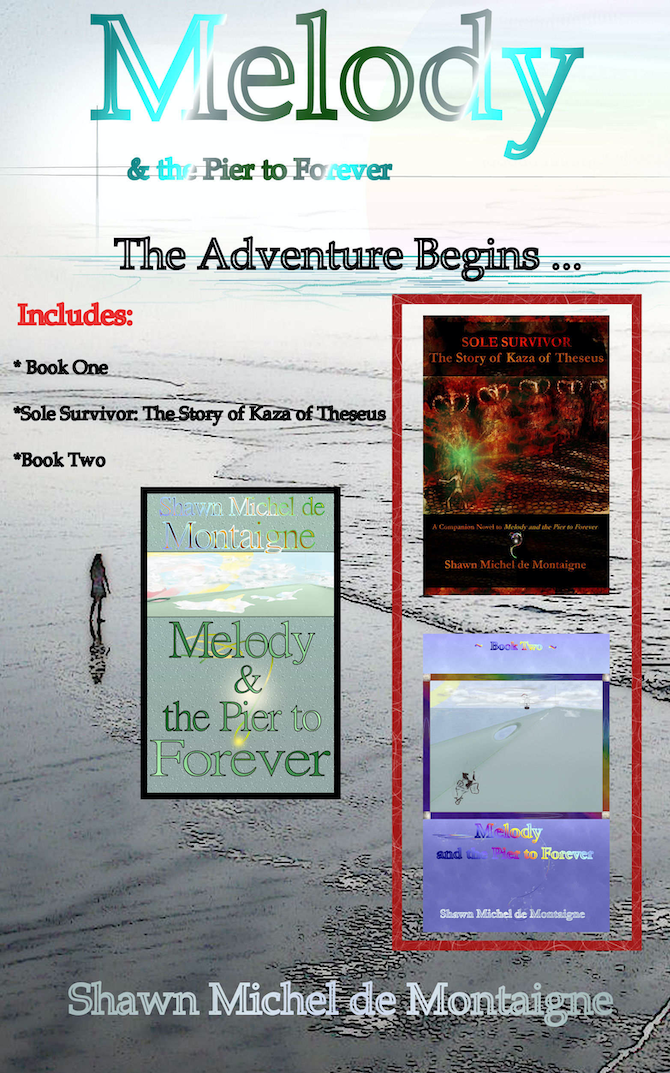 Melody and the Pier to Forever: The Adventure Begins ...

Included in this download are the first three novels of Melody and the Pier to Forever:

MELODY AND THE PIER TO FOREVER: BOOK ONE

Melody Singleton is a bright 13-year-old girl who loves math, classical music, her mom, her best friend Yaeko, and her dog. To her classmates that makes her a nerd, and they cruelly treat her as such. After being expelled from the advanced algebra class for not paying attention, she meets her new teacher, Mr. Conor, who gives her a very strange homework assignment. You see, she got kicked out because she was distracted by a symbol that the rest of us can't see, a beautiful sigil that, incredibly, Mr. Conor can see too, because it's on the assignment he gave her!

Her mom goes on a date to the Pier with Mr. Conor, and Melody is forced to tag along. That's bad enough. But then on the date Mr. Conor introduces her to one of his friends who freaks her out because his eyes are completely black; and then on the walk home, seagulls attack Mr. Conor and he has to be taken to the hospital!

Her weird assignment still beckons. Melody suspects that the mysterious symbol on it, and Mr. Conor's weird friend, and the seagull attack are all intimately related like the variables in an algebra equation. If she can just figure out what the sigil is, how to make it do what she wants, she knows the rest of the equation will be solved.

What she doesn't know is if she's successful, her life will be changed ... forever.

SOLE SURVIVOR: THE STORY OF KAZA OF THESEUS

An entire world falls to war.

A young man watches helplessly as his sister is eaten by a giant demon right before his eyes. He narrowly escapes death himself; buoyed by the current of a corpse-filled canal, he bears horrified witness to the complete destruction of his country, Theseus. The invaders are everywhere--and intent on killing everything that moves or breathes.

With nothing more than the encouraging words of a dying Healer and a mysterious lens-shaped object that his sister threw to him in her last moments of life, Kaza of Theseus dares to escape the closing jaws of doom and make it to the distant renegade fleet rumored to be sailing out of harm's way along the Great Pier known as Ae Infinitus, and led by a king named Conor Kieran Faramond Benedictus I, who dares to stand against the evil and fight back.

MELODY AND THE PIER TO FOREVER: BOOK TWO

Anurag de Bouchard is on a mission. He's waited half his lifetime for this moment. At last he can light the beacon that will spread the news across the whole of Aquanus:

The Apprentice has come.

All across the vast, dangerous waters of that ocean world, thousands of revolutionaries are quietly mobilizing. It is time to rise against Emperor Necrolius Anaxagorius, the soul-consuming monster devouring the heart and soul of Aquanus like a cancer and growing more powerful by the day. The Apprentice is prophesied to be the only one who can destroy him before he invades Earth and consumes it, too.

But the Apprentice, Melody Singleton, is only thirteen years old, and still on the other side of the Tangent, the portal separating Aquanus from Earth. As she and Yaeko Mitsaki, her best friend, and their parents prepare for a whole new life and the distinct possibility that they'll never return home, a hidden kingdom and its king brace for all-out war with the emperor's mighty forces. Even with the Apprentice on their side, their chances for victory are next to nothing. But if they don't prevail, Melody will never get the chance to confront Necrolius, and Aquanus and Earth will fall forever to his deadly clutches.

The stakes couldn't be higher. Even so, there is time yet for much less frightening things like falling in love, traveling to Antarctica, dancing in the living room, playing in a concert, first kisses, learning how to turn into a red-tailed hawk, and laughing and singing.