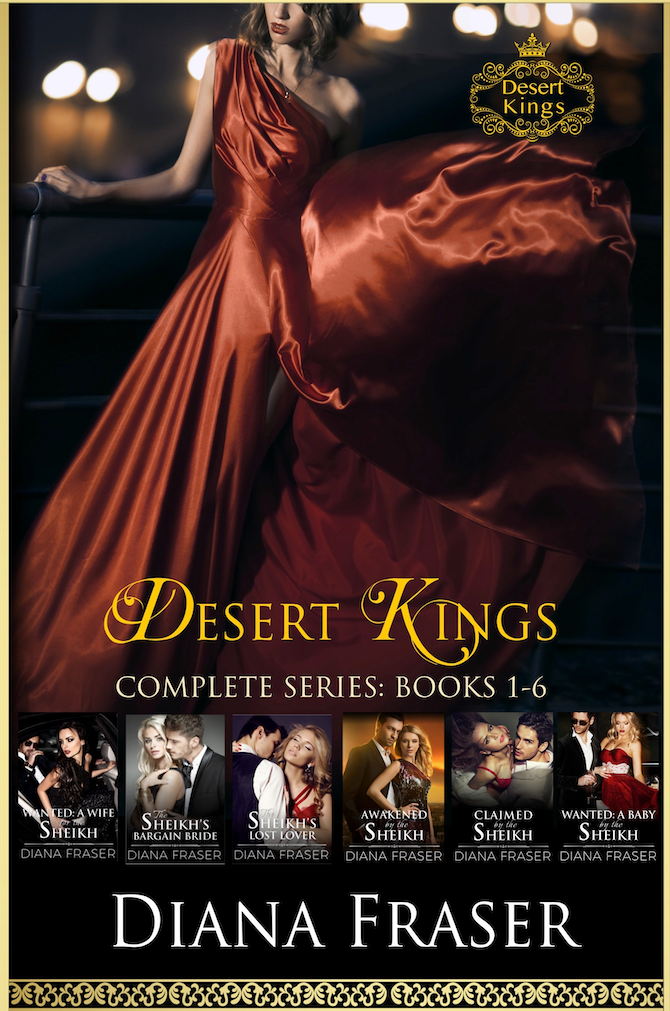 By Diana Fraser - Author of Contemporary Romance
Escape to the lands of the Desert Kings with this boxed set of six contemporary romances containing the complete series. You'll find powerful sheikhs, strong women, and mystery and intrigue. So pour a glass of something long and cool and sit back and enjoy the heat and passion which await you in the land of the Desert Kings.

Wanted: A Wife for the Sheikh (Book 1)
Crown Prince Malek of Sumaira needs the respectability of a wife—fast. Or at least his country does. And his new PA is happy to help him find one. After looking after her sick mother for years, the last thing Sophie wants is to be tied down. But will the idea of being tied down by this Michael Fassbender clone become an obsession she needs to get out of her system before it’s too late.

The Sheikh’s Bargain Bride (Book 2)
The ultimate controlling sheikh, Zahir Al-Zaman is so obsessed with freedom-loving Anna Whitman that he traps her into marriage. But he won’t force her into his bed; he has his strategies for seduction. Despite an intense attraction, Anna refuses to be seduced because she won’t have a relationship based on lies. But how can she reveal secrets that will destroy the beliefs he holds most dear?

The Sheikh’s Lost Lover (Book 3)
When commitment-phobe Lucy finds herself falling for the King of Sitra, she wants to run. But she can’t. He’s her only clue to her missing sister. Razeen is determined to do his duty as King, even if it means an arranged marriage. But he has two weeks before he has to choose a wife. Two weeks in which to have an affair with Lucy. What could go wrong?

Awakened by the Sheikh (Book 4)
Cara Devlin’s sexy voice lands her the job as translator to the King of Ma’in with a salary that will ensure she can leave Ma’in, and the painful memories of a husband who used her, and start afresh. King Tariq is devoted to his children, his country and remaining single. He soon realizes Cara could prove useful in his business negotiations... but only providing she doesn’t know she’s being used.

Claimed by the Sheikh (Book 5)
With an arranged, love-free marriage looming, Prince Sahmir of Ma’in is enjoying his last night in Paris when Aurora runs by, fleeing for her life. All Rory wants is to regain the estates her father lost to the Russian mafia. She hadn't planned on being kidnapped by the Russian, or living with a sheikh and she certainly hadn’t planned on a baby.

Wanted: A Baby by the Sheikh (Book 6)
“You walked away from our wedding and kept on walking. And I hear nothing from you for a year, except a trail of credit card charges. Now you return saying you want our baby. What the hell is going on, Taina?” But Finnish heiress, Taina, can't answer Prince Daidan's question without destroying his world. So Daidan comes up with a proposal of his own...

Like to read more sheikh romances by Diana? Check out the following books.