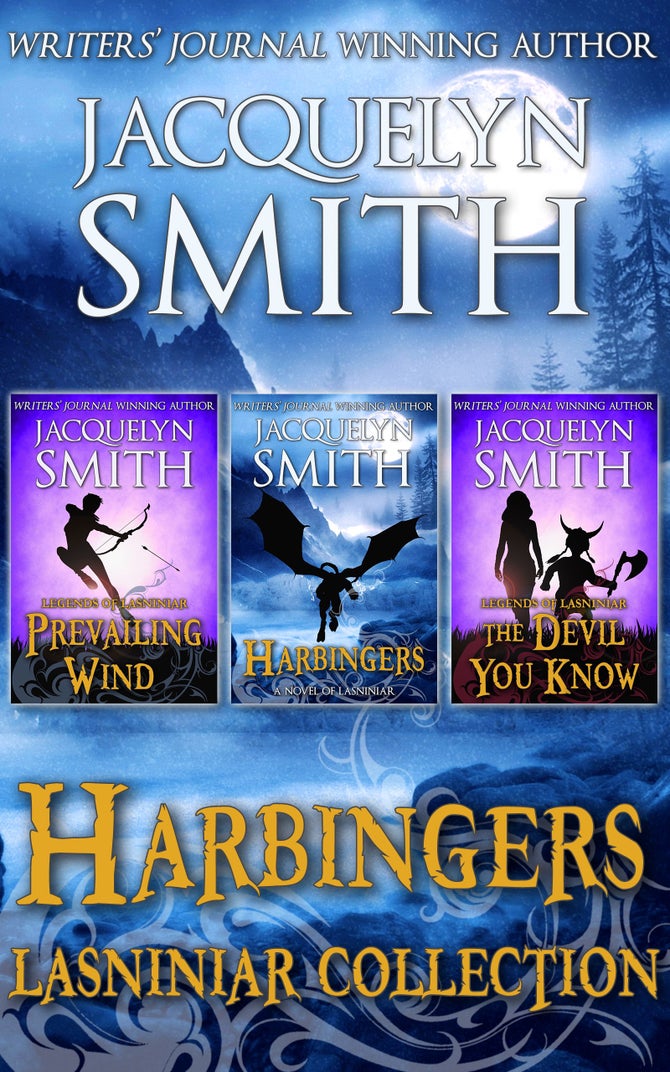 The winds of change blow across Lasniniar, throwing everything into chaos.

...And the Free Races need more than Iarion and Barlo to stand against the darkness.

A new chapter unfolds in this collection from the World of Lasniniar epic fantasy series by award-winning author, Jacquelyn Smith. This collection includes one novel and two shorts:

Legends of Lasniniar: The Devil You Know

An unspeakable act. Iarion flees with Barlo in a useless effort to outrun the heinous crime his dwarf friend committed under desperate circumstances.

Meanwhile, the rest of Lasniniar marches to war. Would-be gods drive the humans against the elder races, granting the most devout of their worshipers magic of their own.

Into this chaotic darkness, a new power emerges.

...A power only Iarion can face.

The future of the World of Lasniniar hangs in the balance in this eighth novel in the epic fantasy series.

Arinwyn leads the Tribe of Hawk across the vast dunes of the Shifting Sands. A lone elf among humans.

The sun beats down on her head scarf like a hammer while the jingle of harnesses fills the dry air. A single shadow falls across the land from overhead in a ripple of movement.

Arinwyn knows the tribe cannot stand against it. But none of the tribe’s warriors want to lose status by fleeing.

Arinwyn must rely on her human companion Nasir to convince them otherwise while she tackles a much bigger problem—how to hold off the dragon.

A short story adventure from the World of Lasniniar epic fantasy series and a follow-up to “Legends of Lasniniar: Without Wings.”

Legends of Lasniniar: The Devil You Know (Short Story)

Mothers cling to their children as they walk through the crowded marketplace. Eyes dart as people hurry to make their dubious purchases.

Demon-warding amulets. Herbs guaranteed to help victims of possession. Paige inspects them all with a jaundiced eye.

The young dwarf woman knows how to deal with demons. Probably better than anyone else in Lasniniar.

In the aftermath of war, a new era begins in this stand-alone story from the World of Lasniniar epic fantasy series.