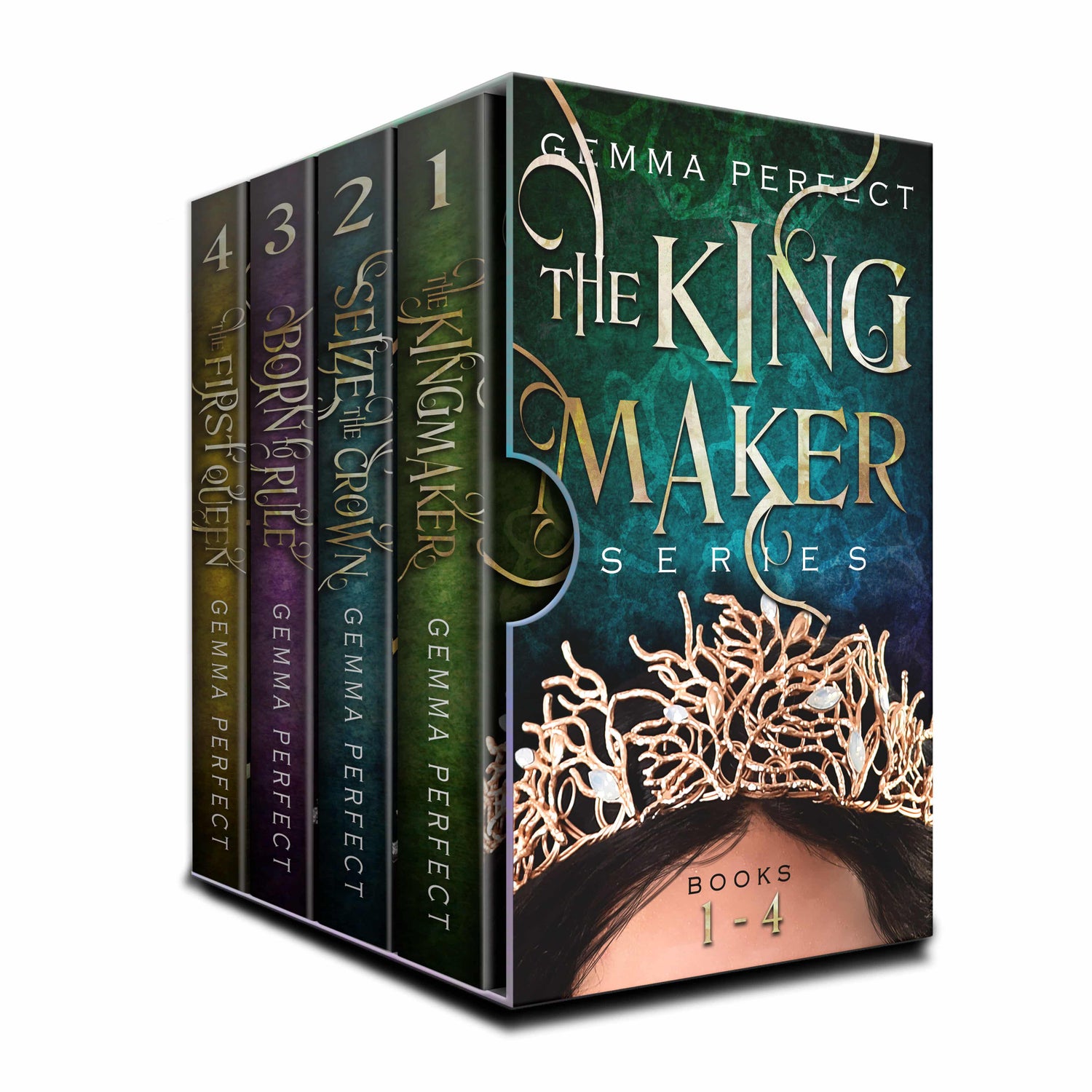 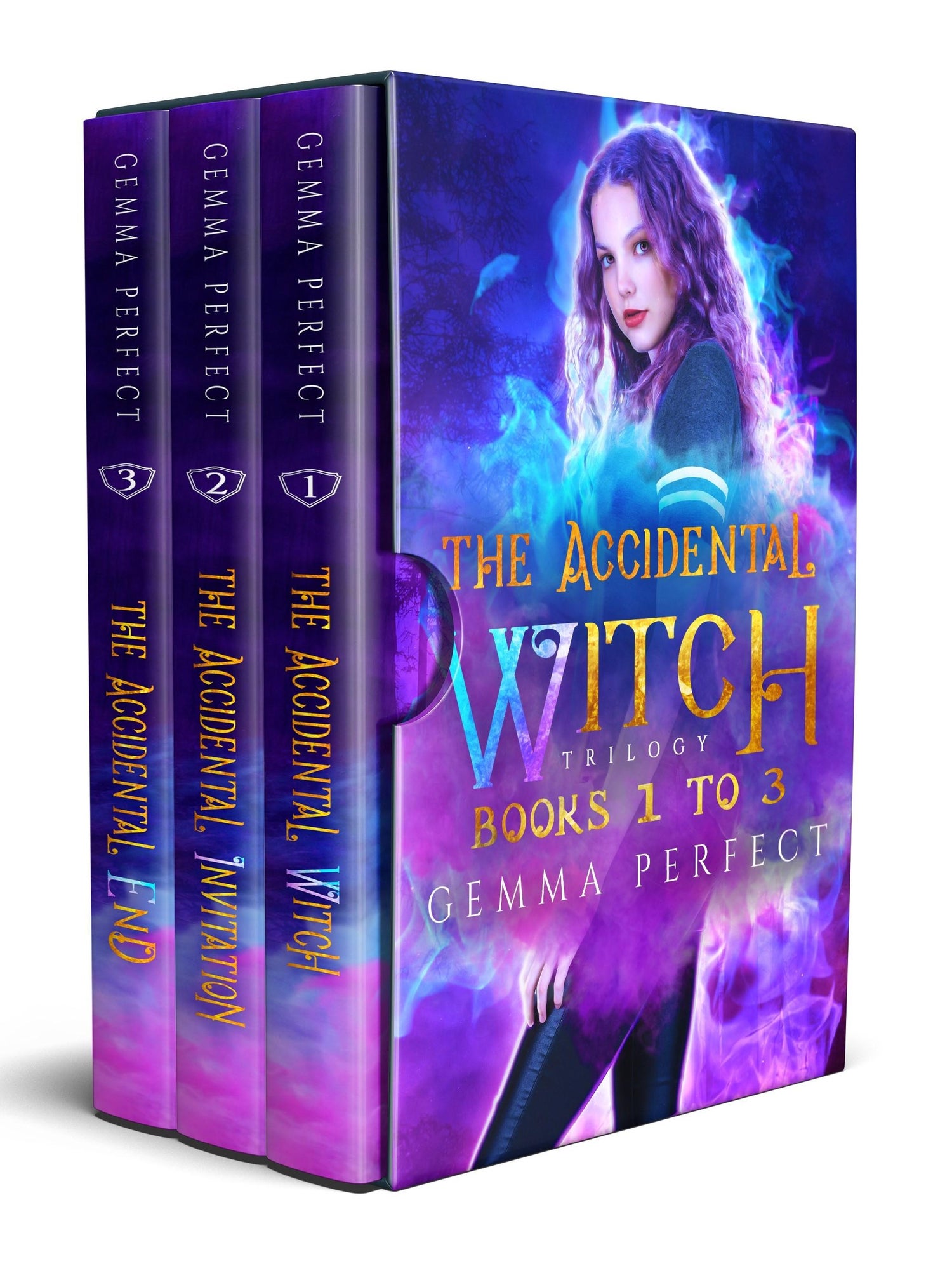 On Sale
£10.00
£10.00
Added to cart
Series Bundle!
The lowest price to buy all three series from Gemma Perfect!

“I am sixteen years old and I will die on the morning of my seventeenth birthday. As tradition dictates, I will be sacrificed and my life’s blood will determine which one of my two brothers will be King. My blood will kill one and crown one. My name is Everleigh and I am the Kingmaker.”


The legend of the Kingmaker goes back millions of years. Kingmakers are special; their magic chooses the rightful King of the Realm and they all die on their seventeenth birthday.

But not everyone agrees with an age-old prophecy that says a girl will rule the Realm and soon Everleigh is locked in a deadly battle for the throne.

Can she escape her blood-thirsty enemies and live long enough to be crowned Queen?


The Accidental Witch Trilogy
★ Witches always win in a fair fight, but not everybody fights fair ★

Enjoy all three books in the fantastic Accidental Witch Trilogy in one go!

Ellis finally decides to get her life back on track after her best friend’s death and her subsequent slide into misery.

Just when she’s determined to wash her hair, wear clean clothes and get her life back on track, it’s thrown upside down again when she stumbles upon a magical ceremony and gets invested as the head witch. Of the whole of Britain. By accident.

And it’s her crush, Fletcher, who should have been invested instead.

Launched into his world; a world full of supernatural creatures and dangerous rebels, can Ellis thrive as a newly hatched witch or will the chaos of her new life, her new romance with Fletcher and the threat from the outlaws prove too much?

Ellis is getting the hang of being a freshly hatched witch and getting used to spending all her time with Fletcher, but the rebels are furious at being thwarted once and are ready to attack again.

Warding off the rebels would be hard enough, but now they have to figure out who released the demons and sparked the fire of the raging species war to begin with.

As Fletcher’s world, the world Ellis is stuck in, gets more and more dangerous, and Ellis falls more and more in love with him, can they triumph in a battle of the species or will an accidental invitation extended to a vampire mean the end for Ellis?

Killing the witch who instigated the rebel war is easy enough, but will it prove as easy to vanquish the demons, placate the council and round up the remaining trouble makers?

But when Ellis sacrifices herself to save Fletcher and everybody else, and an earth shattering betrayal alters everything, is it the end for Ellis, or a new beginning?


① The Rise of the Fairy Queen


• With both her parents dead, fairy princess Elsie has been locked up in the castle since she was ten years old •

Now she’s sixteen she’s been given her freedom to leave the kingdom and marry a man she’s never met.

But on the journey across the seas she finds out about the horror and abuse her step parents are inflicting on the fairy kingdom. She decides to forgo her freedom so she can save the kingdom she once called home.

Her return sparks a rebellion, an uprising, a battle like the kingdom has never seen before.

★ Will Elsie defeat her evil step parents and reign triumphant or die trying? ★

② The Fall of the Fairy Queen


• Elsie succeeded in her quest. Her step parents are dead and she’s the new queen •

But before she even gets the crown on her head, she is devastated by a shocking betrayal.

How can she rule a peaceful Kingdom when in her life is in danger?

★ Can she defeat the odds and reign supreme or will the traitor in the castle destroy her? ★


③ The Triumph of the Fairy Queen


In the final book in the Fairy Queen Trilogy, will Elsie be able to break free and reign over her Kingdom, or will the people who so desperately want to stop her succeed?


★ Can Elsie triumph or will she fall again, and if she fails, will she survive? ★
You will get the following files: