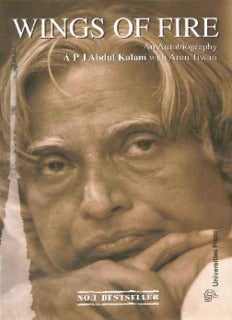 By pacific international limited
As chief of the country’s defence research and
development programme, Kalam demonstrated the great potential for dynamism and innovation that existed in
seemingly moribund research establishments. This is the
story of Kalam’s rise from obscurity and his personal and
professional struggles, as well as the story of Agni, Prithvi, Akash, Trishul a nd Nag - missiles that have become
household names in India and that have raised the nation to
the level of a missile power of international recokoning. At the same time as he has helped create India’s awesome weaponry, Kalam has maintained the ascetic
rigour of his personal life, working 18 hours a day and
practicing the veena. With characteristic modesty, Kalam
ascribes the greatness of his achievement to the influence
of his teachers and mentors. He describes the struggles of his boyhood and youth, bringing alive everyday life in a
small town in South India and the inspirational role of educators. He describes the role of visionary Indian
scientists, such as Dr Vikram Sarabhai, and of the creation
of a coordinated network of research institutions. This is also the saga of independent India’s struggle for
technological self sufficiency and defensive autonomy – a
story as much about politics, domestic and international, as
it is about science