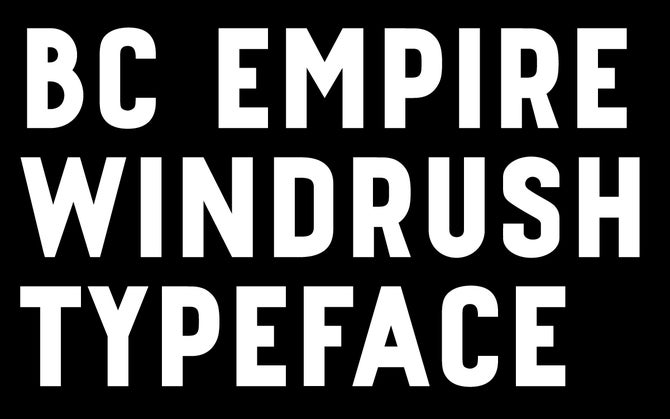 By Bunbury Co
BC Empire Windrush is a typeface inspired by the iconic lettering on the HMT Empire Windrush, the British service passenger ship that brought one of the first groups of postwar Caribbean immigrants to the United Kingdom. The multiple-user package contains both desktop & webfont versions.

The Windrush docked in Tilbury, England, on 22 June 1948, bringing workers from Jamaica, Trinidad and Tobago and other islands, to help fill post-war UK labour shortages.

The arrival of the 500 plus Caribbeans, was a landmark in time and core to the formation of modern Britain today. The newly-arrived immigrants would go on to prosper and contribute to British society at every level, often while facing brutal racism and prejudice.

This typeface pays tribute to their sacrifice. The hand-produced lettering on the front of the ship, has been recreated as a full, all-caps typeface, incorporating much of the idiosyncrasies and character of the original typography itself. This typeface is as unique as the passengers that arrived on a cloudy June Tuesday over 70 years ago.

Windrush Day is now commemorated on 22 June - the first being observed in 2018. The lead-up to the event is marked with exhibitions and cultural events.

As a Black British descendant of those pioneers, BC Empire Windrush pays homage to my history, and the history of Britain. Continuing our inspirational story, by enabling others to tell theirs.