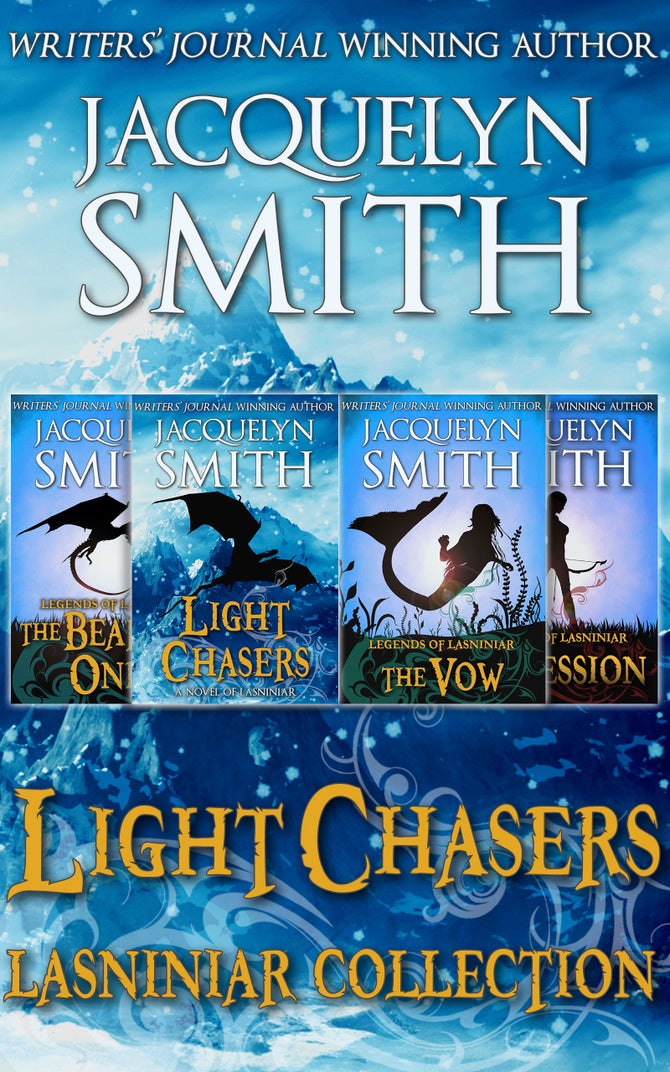 By WaywardScribe Press
Two elves from tribes on the brink of open hostility. Under normal circumstances, Iadrawyn and Valanandir would never cross paths.

But blood-drinking demons threaten to rule Ralvaniar under the cover of darkness while the elven tribes bicker.

...And both magic and fate have other plans.

Lose yourself in the elves’ sprawling past in this starter collection from the World of Lasniniar epic fantasy series by award-winning author Jacquelyn Smith. This collection includes one novel and three shorts:

Legends of Lasniniar: The Vow

Legends of Lasniniar: The Bearded Ones

Valanandir’s throat spasms as he tries not to choke.

He spits out a salty mouthful of seawater and grips some nearby rigging one-handed as the ship rocks beneath him.

Under skies devoid of moon or sun, Valanandir fights for his life alongside his Sea Elf crew. But his ship already burns like a funeral pyre in the middle of the storm-tossed ocean.

...And far more than he realizes depends on his survival.

Lose yourself in the thoroughly imagined World of Lasniniar with this first novel in the series.

No one in the entire Wood Elf tribe understands Golvanyar, aside from his mother. Until he meets Iadrawyn.

Golvanyar knows the moment he first spies her from the shadows that they share some kind of connection. He can feel it in his bones as he watches her, unseen. Does Iadrawyn feel it too?

Only one answer can satisfy Golvanyar.

In the richly-imagined World of Lasniniar series, “Possession” focuses on an event from the elves’ sprawling past—an event that forever changes Golvanyar, and starts Iadrawyn on the path to becoming a woman of legend.

Legends of Lasniniar: The Vow

Nimrilwyn swims the seas of Ralvaniar—a respected member of the Folk.

...One of the few who takes an interest in the land-dwelling elves.

None of the Folk understand her friendship with them. Why bother to form a bond with those who can never know life beneath the waves?

But Nimrilwyn values her unusual friendships. She prides herself on her loyalty. Even to those not of her own kind.

Visit the sprawling past of the World of Lasniniar series in this stand-alone fantasy story.

Legends of Lasniniar: The Bearded Ones

The sky to the north of the Light Elves’ wood remains empty. Only a chain of mountains marks the horizon.

Iadrawyn keeps watch from the cover of the ancient trees and waits. The forest hums with life around her.

The world beyond remains a mystery to the elves. What kind of dangers and potential allies roam outside their borders?

Iadrawyn looks to the sky and waits for answers.

A stand-alone story of the elves’ exploration of their new home in the World of Lasniniar epic fantasy series.