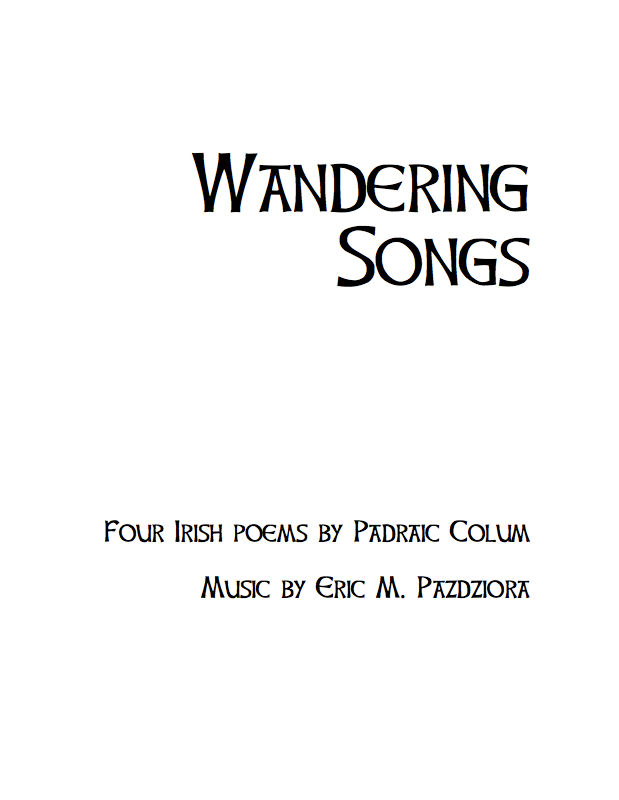 Music by Eric M. Pazdziora
Texts by Padraic Colum, from The King of Ireland's Son (edited by EMP)

1. The Wonder of All Wandering
2. Morag’s Song (Red Rowan Berry)
3. When Sleep Would Settle on Me
4. The Edge of Day

Wandering Songs is a song cycle in four movements, premiered in 2005. It combines my interest in vocal music with my love of Irish folklore and fairy tales. The texts for Wandering Songs are taken from The King of Ireland’s Son, an overlooked 1916 novel by the Irish poet and dramatist Padraic Colum (1881-1972). Colum was a leading figure in the Irish Literary Revival, moving in literary circles with W. B. Yeats and James Joyce, and collected many Irish folk tales and songs. In his book, Colum weaves narrative threads from several Irish fairytales into a lyrical whole, occasionally interjecting original poems in the style of Gaelic folksongs.

For more information and to hear a recording, visit this link.