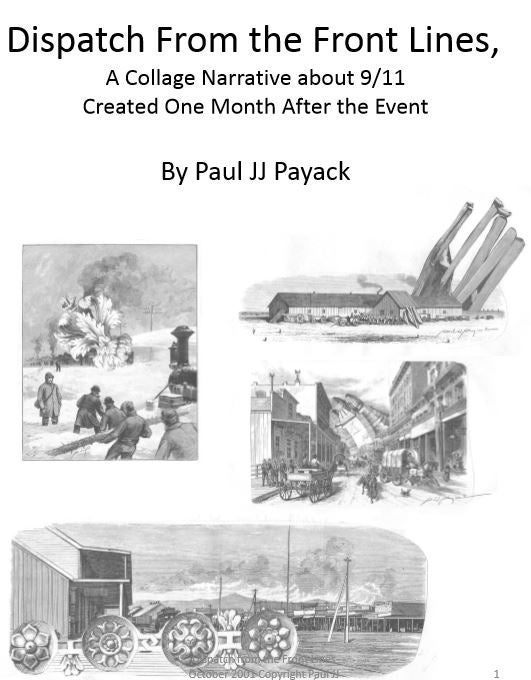 Dispatch From the Front Lines (9/11 Illustrated)


I created these thirteen collages two nights ago in the early hours of the morning in the very heart of the District of Columbia, a few blocks from the White House.

The previous evening had taken on all the attributes of a deathly beautiful, moonlit autumn evening, with a warm and gentle breeze from the Southwest, and all the splendor this Capitol City is capable of displaying, from the commanding presence of the Capitol Dome to the silent testimony of the Washington Obelisk bolding piercing into and through the dark.

But all this beauty belied the all-persuasive tension, like a hitherto unknown and yet-to-be-discovered form of gravity gently pulling on one’s heart.  (I await some post-Modern Isaac Newton or Albert Einstein to establish the attendant theoretical and mathematical constructs.)

For this was, and is, and remains a city under siege.  Under siege by an invisible enemy which could (and can) be found anywhere, elsewhere or nowhere.  As my wife opined, it was one of the most protected areas on the planet, and undoubtedly this was true, but, of course it gained that distinction because it also one of the most dangerous places on the planet and perhaps the most highly targeted of targets set squarely in the night scopes of the stealthily silent invaders.

Since the events of September 11th, I have attempted to somehow encapsulate something that cannot readily be captured, at least from the perspective of days and weeks.  As with all things human, a distance and perspective of a generation or two …