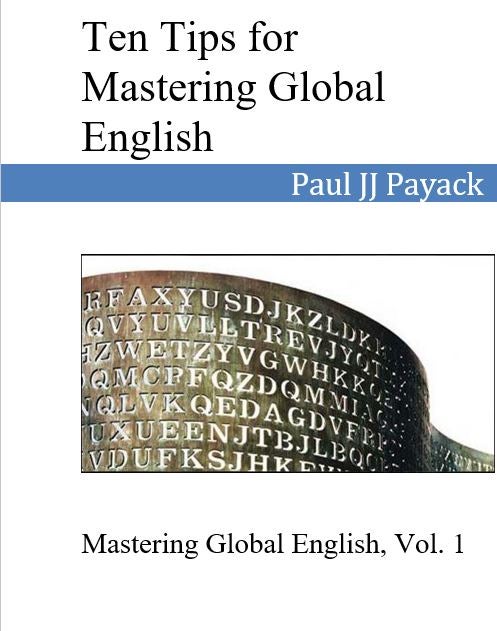 By delivering its lessons in informal, brief and easy-to-digest sections, Ten Tips for Mastering Global English can serve as an entry-point to in depth study of the subject.

The author, Paul JJ Payack, is the founding president of both yourDictionary.com and the Global Language Monitor. He is the author of some seventeen books as well as hundreds of articles on Global English, Marketing and High Technology, as well as science fiction, drama, and the like.
Educated at Harvard and Bucknell Universities in the US, his latest work is A Million Words and Counting, about the growth and nature of the Global English and the impact it is having on various aspects of culture, as well as the impact of culture on the language itself.

At the Global Language Monitor, we look at English as Global English. Rather than focusing on geography (British English, American English, Indian English, we focus on usage—how English is spoken today, by the world’s scientists and technologists, the youth, in the boardrooms of multi-national corporations, in the world of entertainment, and the like.

We’ve also come to realize that there are several momentous trends that are occurring in  Global English right now: 1) A vocabulary explosion: the number of everyday words we use to communicate-- those recorded in dictionaries, in newspapers, in  blogs and on the internet, in correspondence to our loved ones, in classroom assignments, in paying our bills, and in recording our history-- is expanding at an unprecedented rate, the total just over a million  words, and 2) A geographic explosion: the English language, which at the time of Shakespeare was spoken in a narrow band in the south of Britain by  only a few million people, has suddenly, and rather unexpectedly, become the language of global discourse, commerce, science, entertainment, and communications,  with  speakers  now  approximating 1.58 billion people.

As an intense observer of the English language, nothing could make me more pleased. And I’m thrilled to be a continuing witness to its evolution, watching and anticipating the countless new ways it will impact the lives of billions around the globe for decades (and even centuries) to come.

Never before in the history of the planet has a single language held as dominant a position as English does today.   Some 1,580,000,000 people can now read this sentence in its original language. Think about that for a minute.
You will get a PDF (743KB) file
Share: