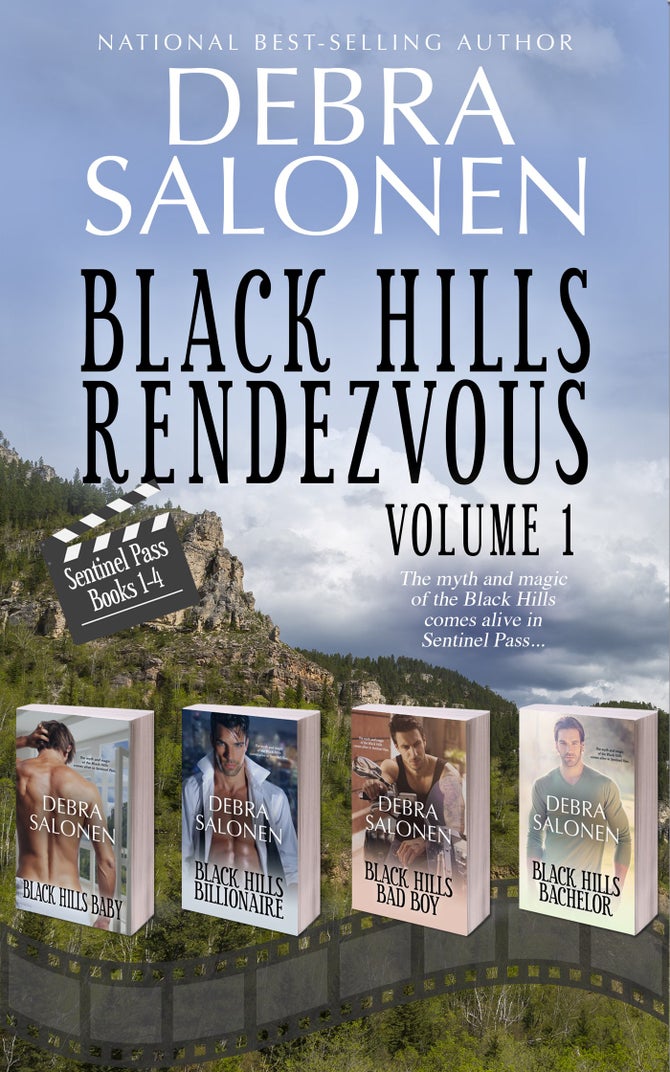 Are you ready for your close-up, Sentinel Pass?

Change hits the sleepy, Black Hills town of Sentinel Pass like a tsunami from a blockbuster movie when Hollywood heartthrob Cooper Lindstrom falls for the Pass’s favorite daughter, postmaster Libby McGannon. It’s only a matter of time until other locals, including the members of Libby’s Wine, Women and Words book club, get written into the script.

This contemporary western romance collection includes the first FOUR books in a TEN-book series set in the Black Hills, Malibu, LA, and Louisiana. In this small town, secrets, mystery, murder and revenge are more than plot points in a script, when love is at stake.

BLACK HILLS BABY
Hollywood heartthrob Cooper Lindstrom needs money to get his late mother's homicidal bookie off his back. Black Hills postmaster Libby McGannon’s online “deal” sounds like a goldmine—exactly the kind of TV sitcom audiences love. Libby might be the ticket that pushes Coop back on top of the ratings, if he can keep from falling in love with her.

BLACK HILLS BILLIONAIRE
Success can hide a multitude of secrets, but when Hollywood's "wunderkind" producer/director Shane Reynard agrees to set his pal Cooper’s TV sitcom in the Black Hills, he knows he’s risking more than a boatload of money. He's risking a war with the brother he hates. What he didn't count on was making Jenna Murphy--his first love and biggest regret--a target.

BLACK HILLS BAD BOY
Look out, Sentinel Pass, Jack Treadwell's got a brand new Harley--and attitude. No more “Mr. Nice Guy.” He’s bad to the bone…sort of. Single mom Kat Petroski knows love-at-first-sight can’t be trusted, and happily-ever-after only exists in romance novels. She’s too busy—and too smart--to fall for a RUB--rich urban biker. Until she does.

BLACK HILLS BACHELOR
A miner and a movie star? Even Hollywood thinks pairing celebrity actress Morgana Carlyle with Sentinel Pass miner Mac McGannon is a bad idea. The only person who thinks it’s the best news ever is Mac’s young daughter, Megan, who insists Morgana Carlyle would make the perfect replacement mom. Even if Mac secretly agrees, it’s clear Morgana isn’t who she claims to be.