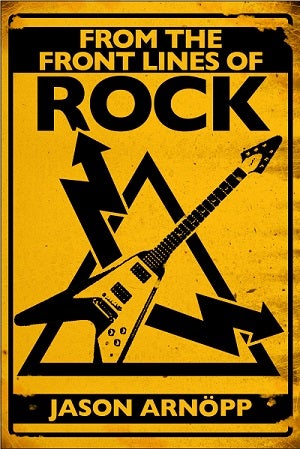 From The Front Lines Of Rock gathers thirty of the best interviews Arnopp conducted between 1992 and 2002, mostly for Kerrang!, the world’s biggest rock weekly magazine.

Highlights include:
-- Going on the road with IRON MAIDEN on their Fear Of The Dark tour, after frontman Bruce Dickinson had announced it would be his last with the band
-- Seeing the sights in Tokyo, while on the road with MANIC STREET PREACHERS
-- Joining GARBAGE on their first major US tour
-- Hanging out with GUNS N' ROSES guitarist Slash at the Sunset Marquis hotel in LA
-- Visiting KORN during the recording of their second album Life Is Peachy, up in the Malibu hills
-- Quizzing legendary rockers KISS after they reunited in 1996
-- Getting some punk guitar-playing tips from GREEN DAY’s Billie Joe Armstrong
-- Encountering a distinctly argumentative PANTERA in a Baton Rouge beer garden
-- And the aforementioned trip to Vatican City with black metal blasphemers CRADLE OF FILTH!

Arnopp adds an introduction and outroduction, plus an afterword for each article and over 200 footnotes throughout the book. These footnotes sometimes see him critique his younger journo self's interviewing technique, or add further detail and memories of the experience.

Whether you're a hardened rock-head who craves nostalgia, or a newcomer curious about rock journalism from the past, From The Front Lines Of Rock will supply the fix you need!

"With a great sense of humour and a sharp ear for the telling quote, Jason Arnopp is an interviewer who always gets the goods. Read and learn” - Andrew Harrison (former editorial genius at magazines including Q, MIXMAG and SMASH HITS.)

"Jason Arnopp is one of those ludicrous, funny people who manages to get the most reticent of stars to tell him things that they really shouldn't. As a journalist, he is blessed with a remarkable bedside manner. He might be able to teach you a thing or two” - Phil Alexander (MOJO Editor-In-Chief and former KERRANG! Editor.)

“It was my very happy experience to work with and read Jason Arnopp for a number of years on Kerrang! One singular thing marked Jason apart in his field – he had the invaluable ability to ask the unexpected question that caught both subject and reader off guard, and unfailingly meant you found out something new about whomever he was interviewing" - Paul Rees (former Editor of Q and KERRANG!)

NOTE: you will automatically receive, via email, the book in both mobi (Kindle) and epub formats. Enjoy!