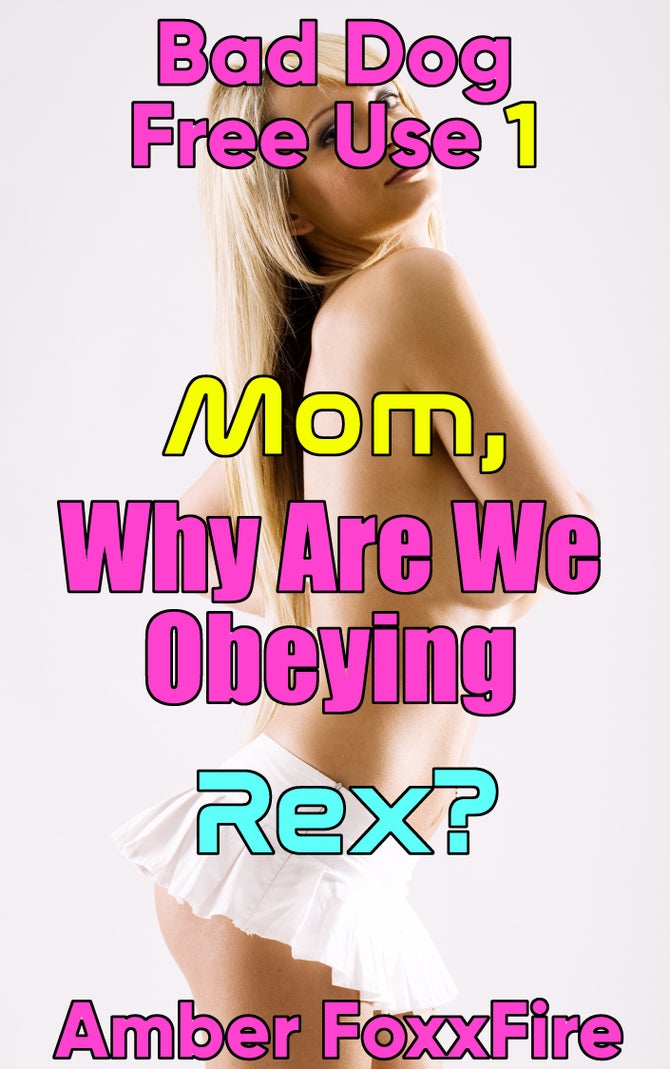 Bad Dog Free Use 1: Mom, Why Are We Obeying Rex?

By Amber FoxxFire
*** Part 1 - featured in this complete pack: https://www.smashwords.com/books/view/953391

I was an experiment. An "unofficial" government experiment. But they lost control. They didn't know what to do with me.

So they sent me away. To be destroyed. But in a twist of fate, I was rescued.

Half Human, half dog, I had the mind of human with the body of a canine.

These are my sordid exploits.

I had been adopted at 12 months old by a very nice lady and her 19-year-old daughter. They were both very hot and very sexual. Tempting, delicious, forbidden odors constantly wafted into my nostrils. Pretty much drove me crazy, I'll tell ya.

They had no idea about my secret past, so I was free to act like a dumb dog. Every chance I got, I stuck my nose up under their skirts or pawed through the dirty panties.

That only heightened my desire.

I wanted the one thing that was forbidden to dogs: I wanted to fuck them. I wanted to drive my knot so deep inside their fertile cunts that they would forever carry my puppies.

Being in dog form with the mind of a human was not exactly easy. I had to get very creative to be able to manipulate simple things such as door knobs.

One day, my chance came. Sandra, the daughter, had left her laptop running while she dashed out for something or other. I'd watched her use the computer many, many times, but I'd never actually used it myself.

But now was the time.

It was extremely difficult manipulating the mouse and keyboard with my paws, but with my super intelligence, I quickly adapted.

With a bit of dicking around, I found myself on a site that claimed it sold a "free use mind control" pill. Okay. Sure. That sounded perfect.

Fortunately, Sandra had left her purse and CC next to the laptop. She must've really been in a hurry.

Damn what I wouldn't do for opposable thumbs!

After a long, tense, hour, the order had been placed. Now to wait. A couple of long days flew past. I gave instructions to pitch it over the back fence so they wouldn't know anything about it.

Success! The package came and, in the dead of night when everyone was fast asleep, I tore into it. Just what was advertised: A large package of pills. Take one a day to increase the power of your mind, it read. Two a day and you can get anyone to do anything you want. Women won't be able to resist your commands.

It was only a month's supply, but I figured if it worked as advertised, I could order more.