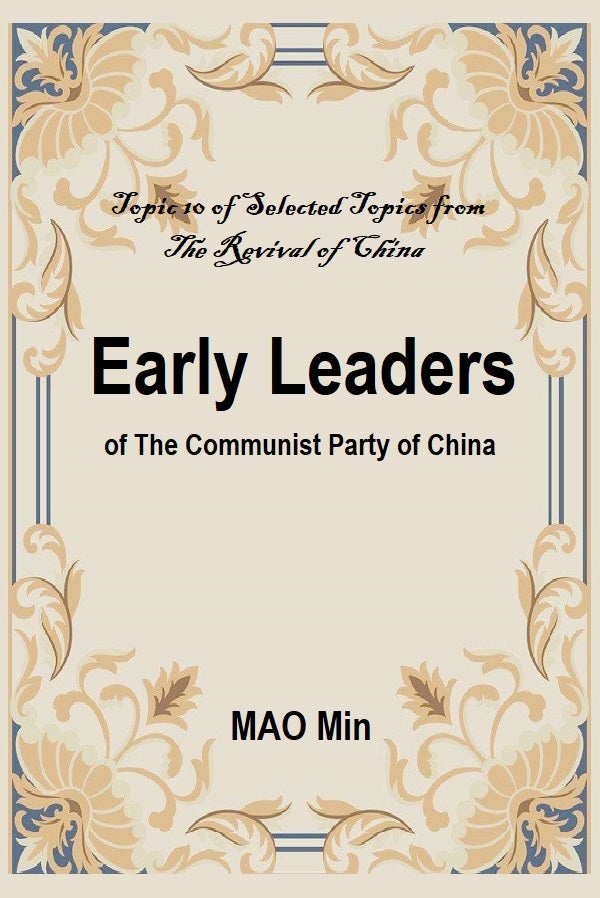 Early leaders of the Communist Party of China: Topic 10 of Selected Topics from The Revival of China

This is Topic 10 of the Selected Topics from The Revival of China. The full book is about the revival of China in the 20th century and the first decade of the 21st century. This topic is about the main activities of the early leaders of the Communist Party of China: CHEN Du-xiu (The May 4th Movement, Foundation of the CPC, The early times of the Party, The cooperation between the Party and the Guomindang Party, Separation with Guomintang, After the failure of the Great Revolution, The Du-xiu Garden) , QU Qiu-bai and LI Li-san (The August 7th Meeting, QU launched general uprisings, The Li-san Route, Criticizing the Li-san Route, QU sacrificed, Excerpts from The Superfluous Words written by QU in prison, The evaluation issue of QU, The later life of LI), and WANG Ming and BO Gu (The Zhong-shan University in Moscow, WANG came to power, BO criticizing the LUO Ming Route, the Fifth Counter Encirclement and Suppression Campaign, The fiasco at the Xiang River, Changing the military march direction, The Zunyi Conference, The Yanan Rectification Movement, The CPC’s Seventh Congress, Later life of WANG and BO).