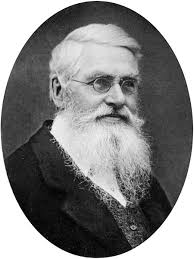 The land of the Orangutan and the Bird of Paradise - A Narrative of Travel with Studies of Man and Nature by Alfred Russel Wallace - 1898.

Wallace chose the Indonesian Archipelago for detailed study, travelling to what was referred to in those days as "the Malay Archipelago." He arrived in Singapore on 20 April 1854, to begin what would turn out to be the defining period of his life. Wallace's name is now inextricably linked with his travels in this region. He spent nearly eight full years there; during that period he undertook about seventy different expeditions resulting in a combined total of around 14,000 miles of travel. He visited every important island in the archipelago at least once, and several on multiple occasions. The volume he later wrote describing his work and experiences there, The Malay Archipelago, is the most celebrated of all writings on Indonesia, and ranks with a small handful of other works as one of the nineteenth century's best scientific travel books. Highlights of his adventures there include his study and capture of birds-of-paradise and orangutans, his many dealings with native peoples, and his residence on New Guinea .