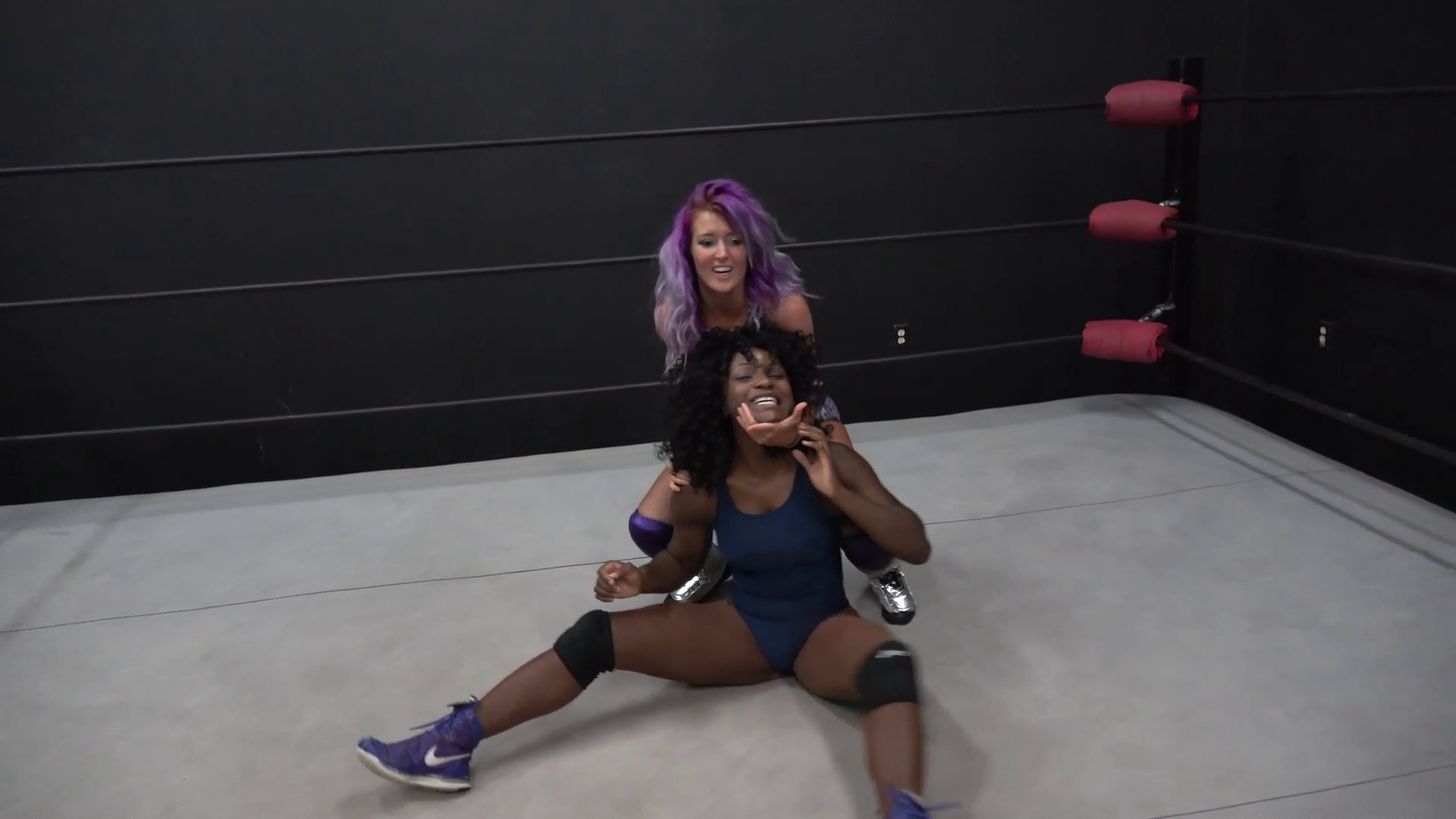 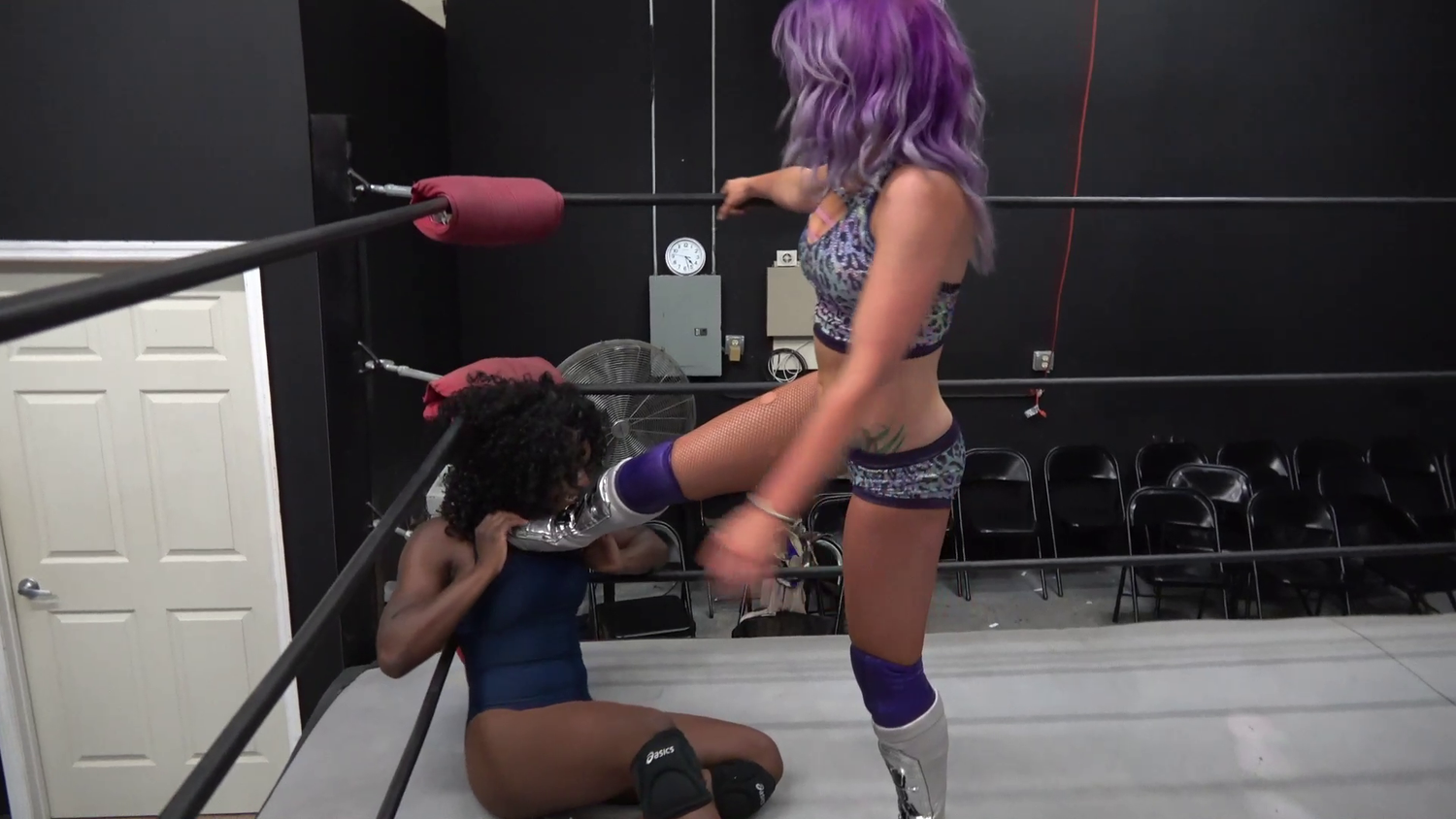 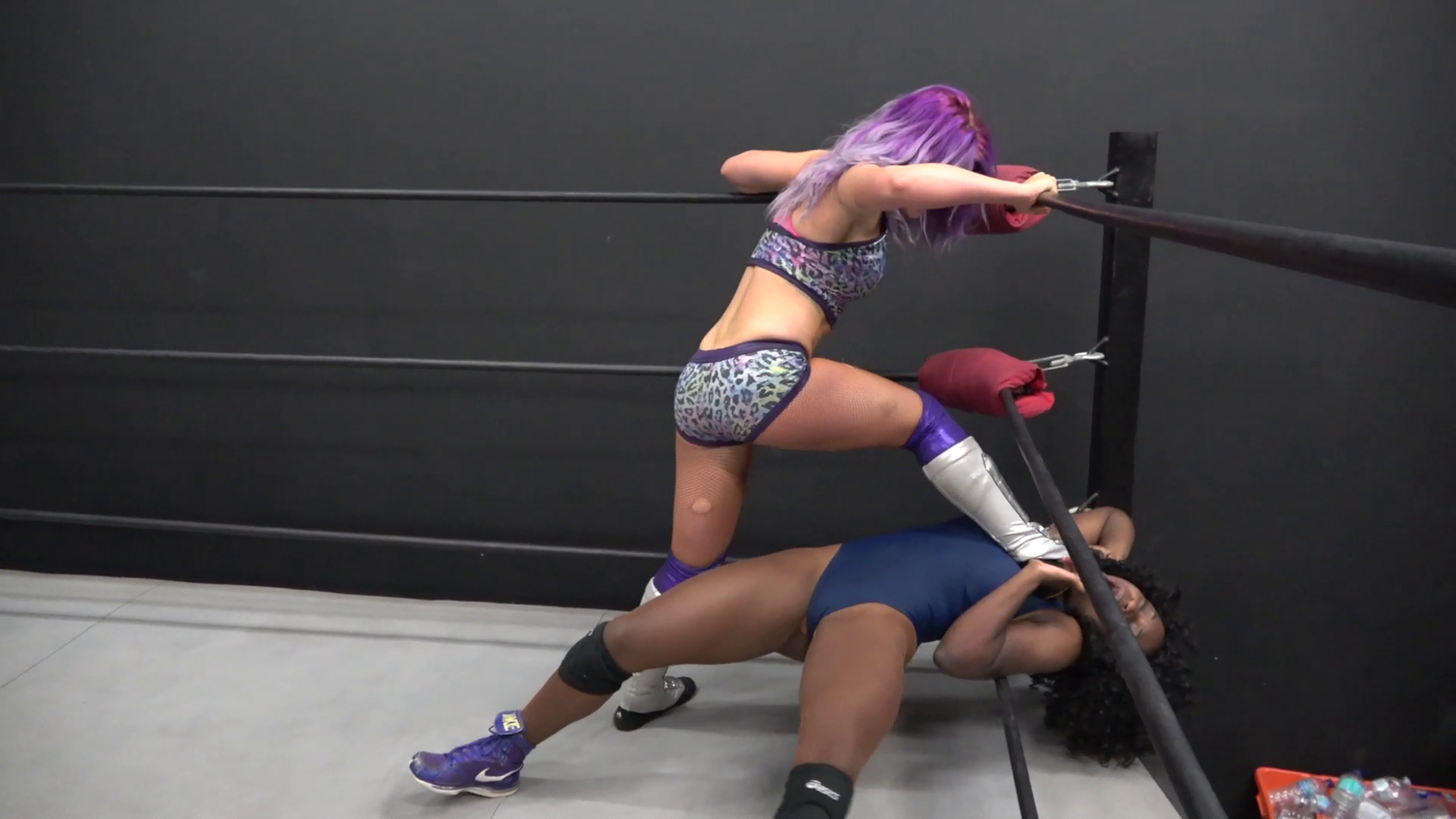 A total squash match is on tap for this video “Complete Domination”, as MJ Jenkins runs into a buzz saw named Ray Lyn in her debut matchup for UWW. And in this particular squash match, MJ is not only beat up, she’s also knocked out!

Before the match begins, MJ is actually pretty confident. She doesn’t believe Ray Lyn can handle all the power she possesses in her muscles. As she shows them off though, Ray Lyn is not exactly impressed. Her lack of respect pisses the black woman off, and she shoves her to the mat! She will wish by the end of this one that she didn’t do that, because from here on in, it is ALL Ray Lyn!

The purple haired woman gets up, and is on Ray Lyn in a flash, beating her into the corner with punches and stomps to the body. Her opponent is stunned by the assault, forced onto the mat by it. Ray Lyn presses her advantage, going in for a humiliating stinkface on MJ! It’s not even a minute into the match and poor MJ is already hurting from Ray Lyn’s aggressive advances!

After delivering the stinkface, Ray Lyn pulls MJ from the corner and proceeds to stomp away at her left leg. This is followed up by a rear chinlock, with some fishhooking thrown in for added punishment. MJ is getting more than she ever imagined she would from Ray Lyn!

A stomp to the midsection comes next, Ray Lyn taunting MJ mercilessly now, with a degrading kiss coming after that. Then it is back into the corner, where she uses her boot to choke the life out of her opponent, going so far as to actually stand on her neck before she lets her free. MJ is fighting for every breath she has after that attack!

Dragging her gasping victim back in the middle of the ring, Ray Lyn hits her with a double axe handle across the back, and then wrenches on her arm, pulling up on it in a nasty submission hold. This is soon transitioned into a bodyscissor, and when MJ tries to fight that off with her now freed arm, said bodyscissor becomes a bodyscissor/armbar combo hold. MJ is being thoroughly dominated by Ray Lyn!

A punch to the face is delivered on MJ after the hold is let go, which sets up a bodyslam immediately after it. Ray Lyn continues to taunt MJ here as she lays on the mat in agony, knowing she regrets ever underestimating her! Continuing her torment, she locks MJ in a surfboard, targeting her already hurting back. MJ screams in pain at this hold, while Ray Lyn laughs at her! She’s having lots of fun at MJ’s expense here!

Working back up to their feet, MJ and Ray Lyn exchange shots to the midsection (Ray Lyn punching MJ, and MJ elbowing her in response), a very brief attempt at a comeback seen here by the dark skinned wrestler, before MJ is struck in the face and shoved down to the mat like a pile of garbage by her adversary. Ray Lyn goes back to the arm at that point, twisting it from the standing position with her leg for a little bit. MJ is unable to stand that for long, begging for release in a hurry, which Ray Lyn grants. She isn’t quite ready to finish her plaything yet!

A shove into her belly from MJ’s knees, prompts Ray Lyn to kick her sharply in her side, and send her into the corner again, this one the opposite of the one she was in previously. As she did the last time she was in this position, MJ finds Ray Lyn’s boot on her throat, cutting off her air supply. When she finishes that torture this time though, she doesn’t pull her back out, but rather forces her to her feet and starts to brutalize her with punches to the face in a similar way to how she opened the fight. Stomps follow them, also like that first attack a while earlier. MJ is dazed as one may imagine from this punishment!

Ensuring she isn’t going anywhere, Ray Lyn comes flying into the corner with a butt splash. The splash forces MJ completely onto the mat, where Ray Lyn keeps up the assault, now going after her by shoving her boot into her stomach and holding it there. MJ pleads for mercy at this new tactic, and it is given to her, but only temporarily!

Ray Lyn snap mares her out of the corner, and applies another bodyscissor combination, this one mixed with a torturous dragon sleeper hold! Making it all worse yet, she goes for a stomach claw as well! MJ makes a feeble attempt to escape all this, but it’s of no use, it being met with scorn, and a reapplication of the bodyscissor, combined now with a full nelson. MJ is going nowhere! Adding insult to injury too, she is shaken like a rag doll as Ray Lyn holds on to her! The rookie wrestler has been absolutely torn apart in this match!

When she does let go of the holds, Ray Lyn viciously stomps a prone MJ on the mat, teasing her by asking her several times over if she wants her to stop. She goes on, going back to the boot choking, placing it on her throat and keeping it there as she is on her back. The choking doesn’t stay on the mat however, as MJ is quickly brought back to the corner with a spank delivered just for the hell of it, where it continues on. MJ is barely even conscious at this point in the proceedings!

Ray Lyn makes that fact even more evident when she has had her fill of the boot choking, pulling her away from the corner and getting her up in a bearhug. She squeezes whatever life MJ had left out of her in the hold, before taking her effectively lifeless body and putting it back into the corner. She delivers a couple of hard headbutts to the midsection there, and then she decides it’s time to put an end to this!

Dragging her out to the center of the ring, MJ’s final punishment is meted out in the form of the Gory Special submission hold. Ray Lyn implores her to give up, but the stubborn woman refuses to, ending up being made to pass out as a consequence. The match is now over, but the torment isn’t exactly yet!

A victorious and gloating Ray Lyn rolls her lifeless victim out of the ring, picks her up over her shoulder as she takes her leave, and carries her away cackling the entire time, proclaiming she is hers forever now. After a beating like she just dished out, is anyone gonna doubt that? If they know what is good for them, they won’t!

Total domination from beginning to end here! Fans of completely one sided squash matches will very much enjoy this! Shot in 4K!