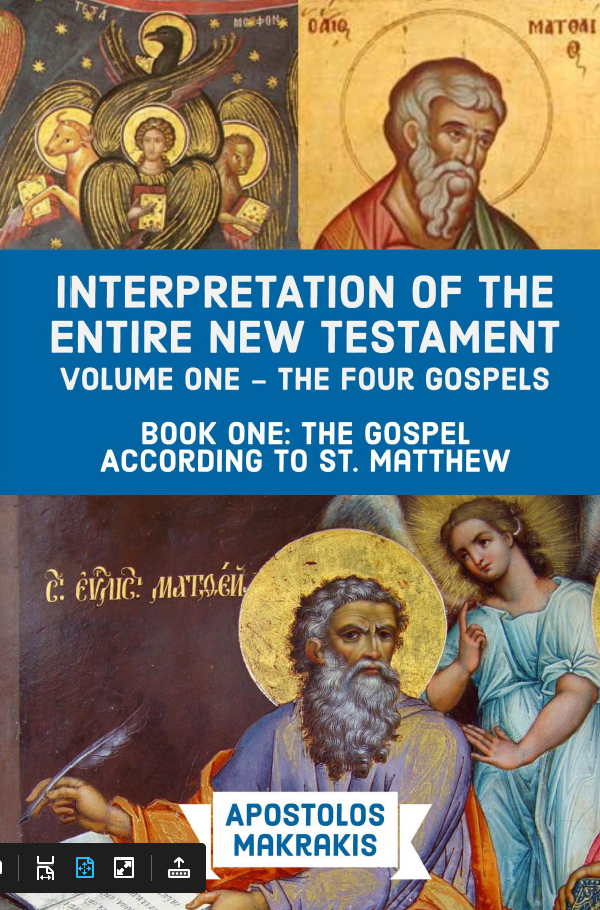 Commentary on the Gospel According to St. Matthew

The Interpretation to the Gospel of Matthew, written by the great teacher of the faith, Apostolos Makrakis (1830-1905), originally appeared as part of a two-volume series back in 1949. Makrakis was a pious intellectual, a remarkable theologian and philosopher, and a prolific writer whose deep-rooted faith was poured out through powerful and uncompromising sermons and works which stirred the very soul of the young modern Greek nation.

This verse-by-verse Orthodox Christian Commentary of the Gospel of Matthew is taken from the larger Commentary on the Entire New Testament, by Apostolos Makrakis, the teacher of Christianity. It is an original work and presents an Eastern Orthodox interpretation of the New Testament such as has never appeared in print, because it follows the author’s own method of hermeneutics. The New Testament is the covenant entered into through Jesus Christ between God and believers in Christ. This Commentary on the New Testament points out the true meaning of the divine Covenant, and it exposes the misinterpretations of heterodox Christian denominations and their distortions of the terms and statements in the divine Covenant. It thus offers them a very great benefaction in that it enables them to see the opposite point of view, and, abandoning their delusion, to return to the dogmas of the united Church of the seven Ecumenical Councils, from which they originally strayed. A clear interpretation that genuinely interprets the divine words of Scripture enlightens all readers to true knowledge of the divine works, enables them to discern misinterpretations and false statements, and saves them from being led astray and from heresy and unbelief. Such is this Commentary on the Entire New Testament – one of great benefit to the learned as well as the unlearned, to those who know and those who do not know. Clarity is wise, but not unclearness, said our ancestors, who spoke to men with clearness and logic. All of the gospel and epistle books of the New Testament are therefore expounded scientifically by Makrakis for the enlightenment of the entire Christian world, in which misinterpretations and perversions of the Holy Scriptures have for many centuries kept divided and virtually at war with itself. Makrakis sheds light on many of the obscure passages and parables in the scriptures. The errors of the heterodox are scientifically exposed, analyzed and refuted through logical interpretation of the entire New Testament.