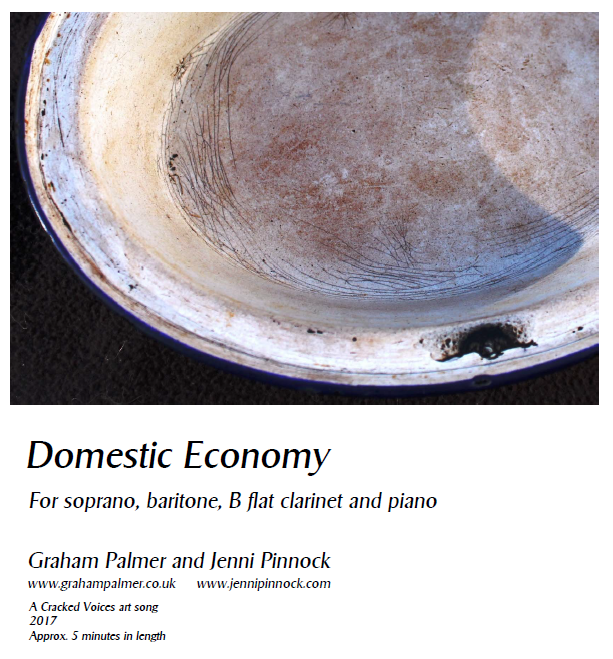 On Sale
£1.50
£1.50
Added to cart
Preview
Domestic Economy is an art song from the Cracked Voices song cycle, set for baritone, soprano, clarinet and piano written by Graham Palmer and Jenni Pinnock.

Programme note
During a normal winter at Thriplow the 72 year-old chimney-sweep William Stockbridge could expect to snare a few songbirds for his cooking pot. This was not a normal winter, though. Severe blizzards over the Baltic were having a strange effect on counties in the east of England. As well as bitingly cold weather, a deep cyclone over Sweden was driving millions of skylarks across the North Sea. It had happened once before in living memory and now again, in 1912, the birds were settling in huge numbers on the open fields and heathland from Duxford to Baldock, scrabbling for whatever food they could find in the hard frost. In London larks were considered a culinary delicacy, a dish that the rising middle-classes should aspire to serve at their dinner parties (as promoted by Mrs Beeton's famous Book of Household Management).

Sensing a profit, locals now flocked to harvest the hungry birds. When the sun had set, pairs of men, one at each end of a thirty foot trammel net would trawl the fields, dropping the net suddenly as the frightened birds flew up into it. The national newspapers were soon reporting that in one week alone 30,000 dead birds (one and a half tons) were sent to London by train from Royston.

Stockbridge, the only man prepared to talk about the slaughter, was dubbed 'the doyen of lark- snarers' and held up to both criticism and ridicule. After investigation by the Royston Crow, it was later admitted in Parliament that the papers had got it wrong and the numbers caught, though staggering, were far fewer than had been initially claimed. It took a further ten years for the RSPB to persuade Harrods to stop stocking skylarks. Due to changes in crops and farming methods over the last century there has been a drastic decline in larks but they can still regularly be heard warbling over Therfield Heath.

Many of William Stockbridge's words are his own, as reported in the London Daily News. The recipe for lark pie given in the song is adapted from Mrs Beeton.

Domestic Economy is partly written out of tempo, and partly in. The lines between parts denote which notes should follow others: e.g. the first piano chord should be followed by the baritone line, which should be followed by the clarinet’s birdsong. In the second system, after the baritone sings ‘smuts on a sheet’, the clarinet and piano should both begin their linked lines, but these need not be in sync with one another. Similarly, in the third system, the piano begins a repeating bar, but the baritone and soprano sing over it in free tempo- though for one bar they are in sync with one another. In the bar before A the piece returns to traditional scoring. At D the performers are out of tempo once more, and back in tempo at E.
You will get a PDF (795KB) file