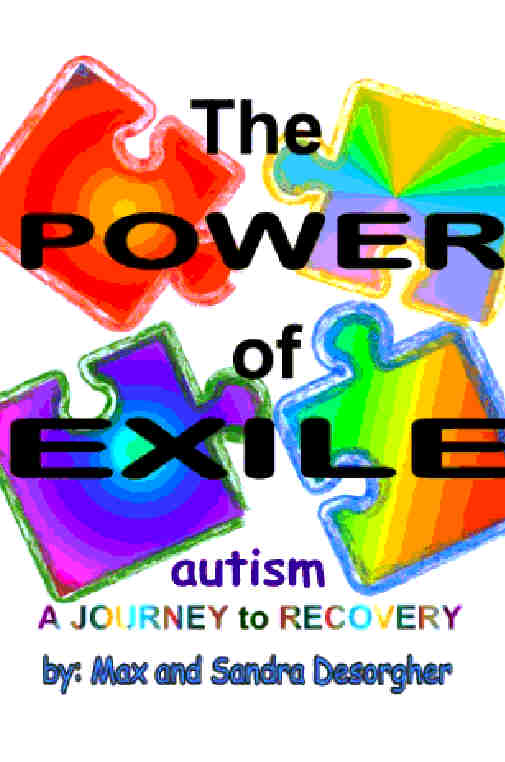 The Power of Exile: Autism, a Journey to Recovery

The book begins with a brief history of Sara, an autistic mentally retarded child, who lands in an emergency care home at the tender age of five after medical evaluations determine her to be also a sexually abused child.

We then meet Sandra, the co-author of the book who, as a married woman trained as a ‘Professional Parent’ was willing to take this 'wild child' into her home.

The story continues through Sara’s struggles and the family’s challenges of raising and caring for Sara, the particular challenges of autism, coupled with attachment disorder and mental retardation, sometimes humorous but always touching the heart.

The early chapters include details of Sara’s personal life – the evaluations, traumas and challenges. It includes the weird and apparently unexplainable behaviors which accompany a diagnosis of autism, followed by the ‘recovery’ and the explanations directly from the autist who experienced them, identifying the reasons and rationales for the seemingly unexplainable rituals and self-abuse.

The story develops as Sara is transformed to a child who, at the age of 11 and within weeks of starting a Special Diet program, no longer shows the signs of autism or mental retardation. Sara emerges as a ‘social butterfly’, as Sandra’s discoveries lead to a new and controversial therapy and a new understanding of autism.

Sara’s awakening leads to travels among the autism ‘experts’ and speaking engagements at conferences in the US, and later around the world. Other autistic children begin this same approach and soon there are autistic people from around the globe who are waking up. Sara’s story is put to paper and needs professional editing. Max, a professional translator who has been interested in autism and alternative healing for many years, comes to America and teams up with Sandra, and together with Sandra and Sara they enter into the world of autism traveling and working in India, the Middle East, the UK and finally Africa.

The story includes specific accounts of some of the individuals and then turns to the cause of autism, which has become a modern epidemic, hidden behind the blanket of the ‘psychological paradigm’ for 60 years despite mounting evidence that it is a treatable medical condition.

Sandra & Max’s research into nutrition, pigment disorders and genetics leads to the emergence of the ‘causal theory’ that autism is part of a natural evolutionary process as humanity adapts to environmental and social changes, as well as science’s endeavor to protect the majority with ‘herd immunity’ at the expense of the few.

"By keeping autism hidden behind the shroud of psychology the truth has remained clouded. Our book opens up a wealth of knowledge and suggests the ways forward for researchers into this disorder. Part three is written with the scientific elucidation which is required to understand the true cause and treatment for this otherwise ‘lifelong disability’, as well as including the specifics of the ‘Sara’s Diet’ protocol and ‘Desorgher Method’ of applied behavioral analysis and adapted education."