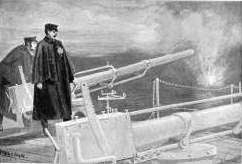 Tsar Wars - Part 1 Angel of the Revolution - A Tale of the Coming Terror
Tsar Wars - Part 1 Angel of the Revolution A Tale of the Coming Terror BY GEORGE GRIFFITH (published 1893). The Angel of the Revolution was written by George Chetwynd Griffith Jones (1857-1906). Angel of the Revolution was originally published as a serial in Pearson's Weekly in 1893 and proved immensely popular--phenomenally so--and was collected into a book the following year. Griffith Jones was a traveler, journalist and extremely successful and influential science fiction writer. He was in fact the most popular science fiction writer in England between 1893 and 1895, his work outselling Wells', with Griffith being the "envy and exasperation of Wells." Griffith was likewise quite influential on contemporary British science fiction, although his anti-Americanism led to his work not being published or even pirated in the U.S., which is why his influence in America is negligible and he remains mostly unknown. In this book, Natas, formerly Israel di Murska, a Hungarian Jew has the misfortune to fall into the hands of the Russian secret police after traveling to Russia to protest the Russian persecution of the Jews. They, of course, tormented him and treated him horribly, forcing him into hard labor and eventually paralyzing him from the waist down. He was later freed, only to find out that his wife had also been taken by the Russians and used as a sexual plaything by a Siberian official until she died of shame and misery. Understandably, Natas bore a great hatred in his heart for Russia, and this hate later spread to an animus for all established authority. Natas (who is a powerful mesmerist but never seemed to have used his powers to help himself when it counted) therefore founded the organisation Terror as a way to overthrow the governments of the world and form a new and more just world order. Illlustrated.