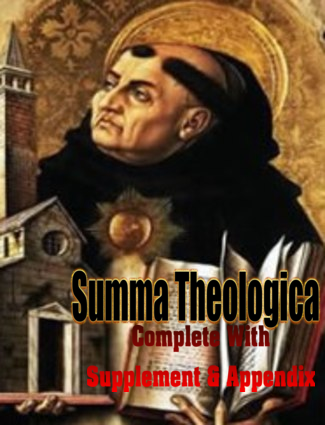 Saint Thomas Aquinas believed that the existence of God could be proven in five ways, mainly by: 1) observing movement in the world as proof of God, the "Immovable Mover"; 2) observing cause and effect and identifying God as the cause of everything; 3) concluding that the impermanent nature of beings proves the existence of a necessary being, God, who originates only from within himself; 4) noticing varying levels of human perfection and determining that a supreme, perfect being must therefore exist; and 5) knowing that natural beings could not have intelligence without it being granted to them it by God. Subsequent to defending people's ability to naturally perceive proof of God, Thomas also tackled the challenge of protecting God's image as an all-powerful being.
Saint Thomas Aquinas is also known for writing commentaries examining the principles of natural philosophy espoused in Aristotle's writings: On the Heavens, Meteorology, On Generation and Corruption, On the Soul, Nicomachean Ethics and Metaphysics, among others.

Shortly after his death, Saint Thomas Aquinas's theological and philosophical writings rose to great public acclaim and reinforced a strong following among the Dominicans. Universities, seminaries and colleges came to replace Lombard's Four Books of Sentences with Summa Theologica as the leading theology textbook. The influence of Saint Thomas Aquinas's writing has been so great, in fact, that an estimated 6,000 commentaries on his work exist to date.

Summa Theologica by St. Thomas Aquinas
This is St. Thomas Aquinas' encylopedia-length work on Catholic theology. This translation, considered of high quality. It has been compiled into a Kindle for your enjoyment.