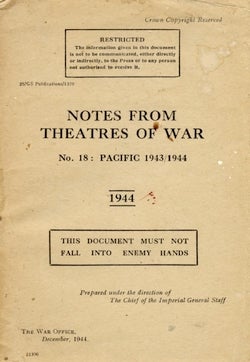 Prepared under the direction of The Chief of the Imperial General Staff, The War Office, December 1944, 26 pages. Contents: General; A Firm Base and Its Defence; Reconnaissance and Information; The Conduct of the Attack; Arms and Special Weapons; Miscellaneous; Intelligence; Notes on Japanese Methods; Diary of Events; Signal Communications; The Use of Man-Pack Flame Throwers in the Pacific Theatre of War; Notes on Japanese Infiltration Tactics. A Merriam Press Military Archives PDF file. FREE