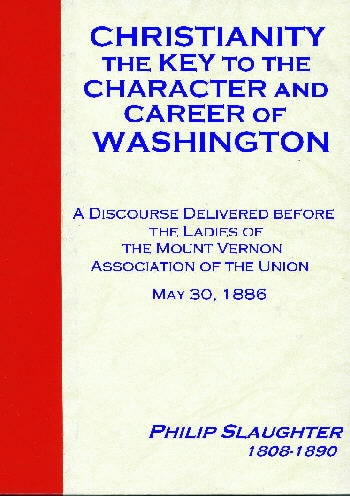 Christianity the Key to the Character and Career of Washington. [1886]

"A Discourse Delivered before the Ladies of the Mt. Vernon Association of the Union, at Pohick Church, Truro Parish, Fairfax County, Virginia, on the Thirtieth Day of May, 1886." — Dr. Slaughter clearly demonstrates that George Washington's motivations were deeper than a mere sense of morality and fairness; but his character and career were definitely, consistently and unashamedly founded upon Biblical Christianity. — B. J. Lossing, Historian: "I have read and reread it with the greatest interest and satisfaction. After a long study of the character of Washington my full conviction is expressed by Dr. Slaughter in the words 'The bedrock on which it rests is Faith.' The testimony of eye-witnesses forms a chain of evidence that he was a communi-cant that would be received as competent in any Court of Justice. I feel a perfect assurance of it." — Bishop Quintard of Tenn.: "It portrayed the symmetrical character of Washington in a most charming style. The author deserves well of his country for his historical research and real appreciation of the grand character he has drawn." — Mr. Brook of the Va. Historical Society: "This discourse is not only charming for its literary beauty, but precious for its facts and its just analysis of the great man to whom his country and all humanity owe so much." — Col. Tuston of Va.: "I have read it with profound delight. It should be filed among the sacred archives of every family in Va., and all English-speaking people. It dissipates the doubts raised by covert insinuators whose authors can never face the light again."

This reset, modernized format version was published in 2011. Editorial Endnotes and Glossary sections have been added at the end of the book. It is internally linked for maximum maneuverability within the document.
You will get a PDF (323KB) file