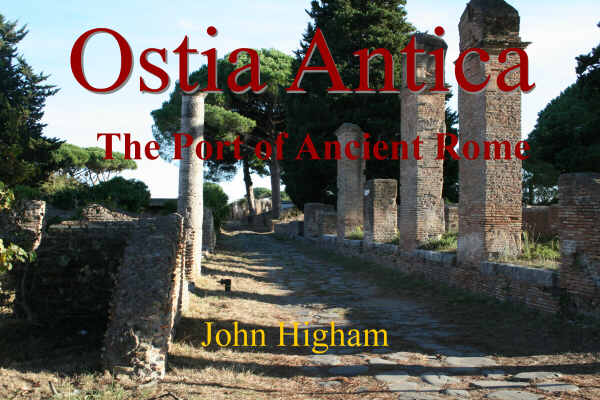 This e-book is an introduction to Ostia in 233 pages, fully illustrated by 243 photos, maps and diagrams.

To avoid public unrest, the rulers of Ancient Rome needed to ensure the steady supply of wheat and other foodstuffs to the city. Most of the wheat was imported from Egypt and North Africa, olive oil from Spain, etc. To avoid long, slow and expensive overland journeys, they developed a port at the mouth of the River Tiber which became known as Ostia (meaning river mouth). Starting as a small defended military base, Ostia grew into a substantial town of some 50,000 inhabitants and survived for over 500 years before a series of earthquakes and tsunamis overwhelmed it. Its recovery was prevented and its destruction completed by barbarian invasions as the Roman Empire collapsed in the early fifth century. The site was never built over again so the ruins of Ostia largely remained hidden until modern times and today they rival those of Pompeii with the full street layout, public and private buildings all surviving, many to first floor level with dozens of mosaic floors, painted walls, etc.

Doenload it first to your computer and then copy it (via bluetooth or USB drive) to your tablet or smart phone to use in real time if you visit Ostia.

"My compliments for this introduction to the site it is absolutely a good guide and an interesting reading. I appreciated it very much." [G.B., Ostia, Italy]