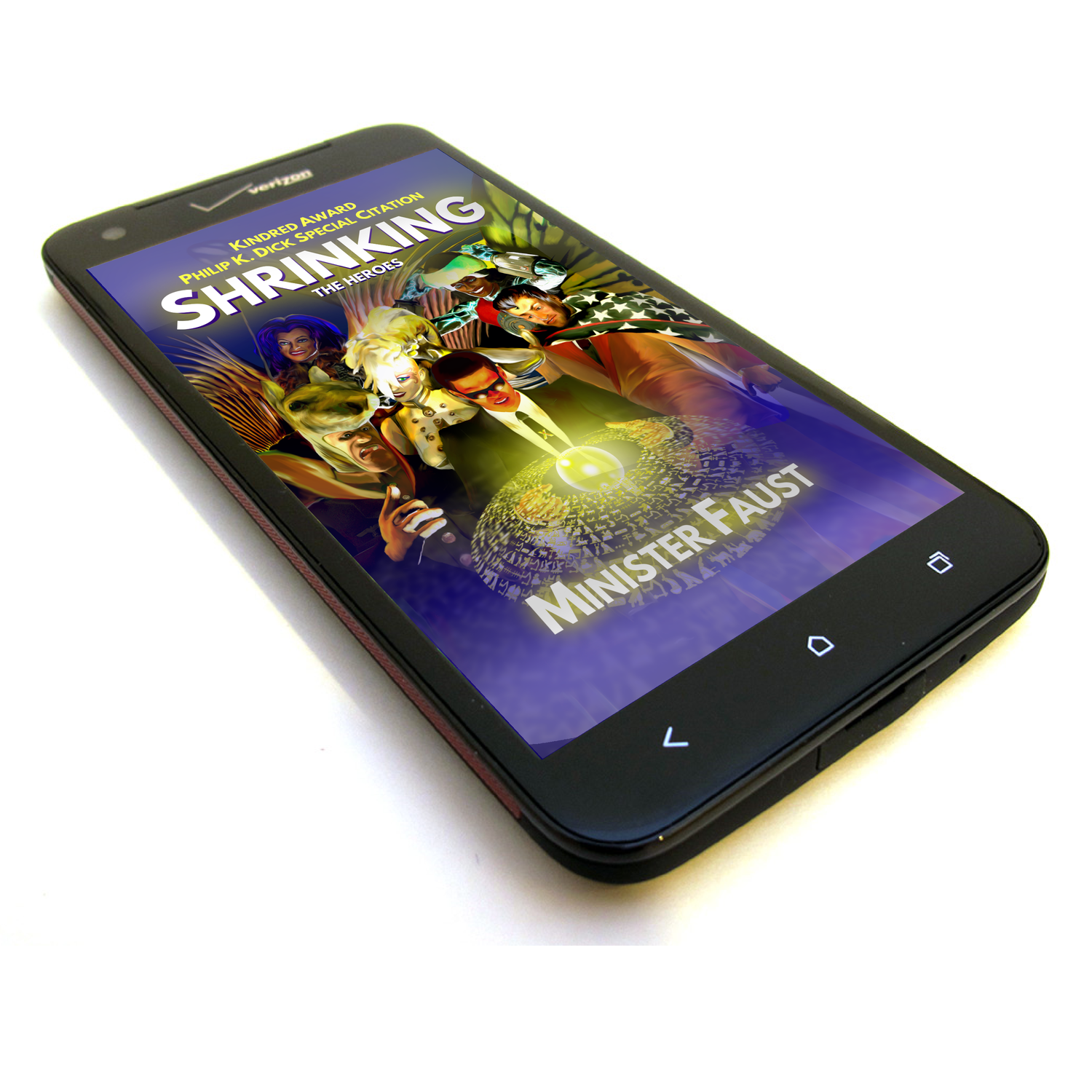 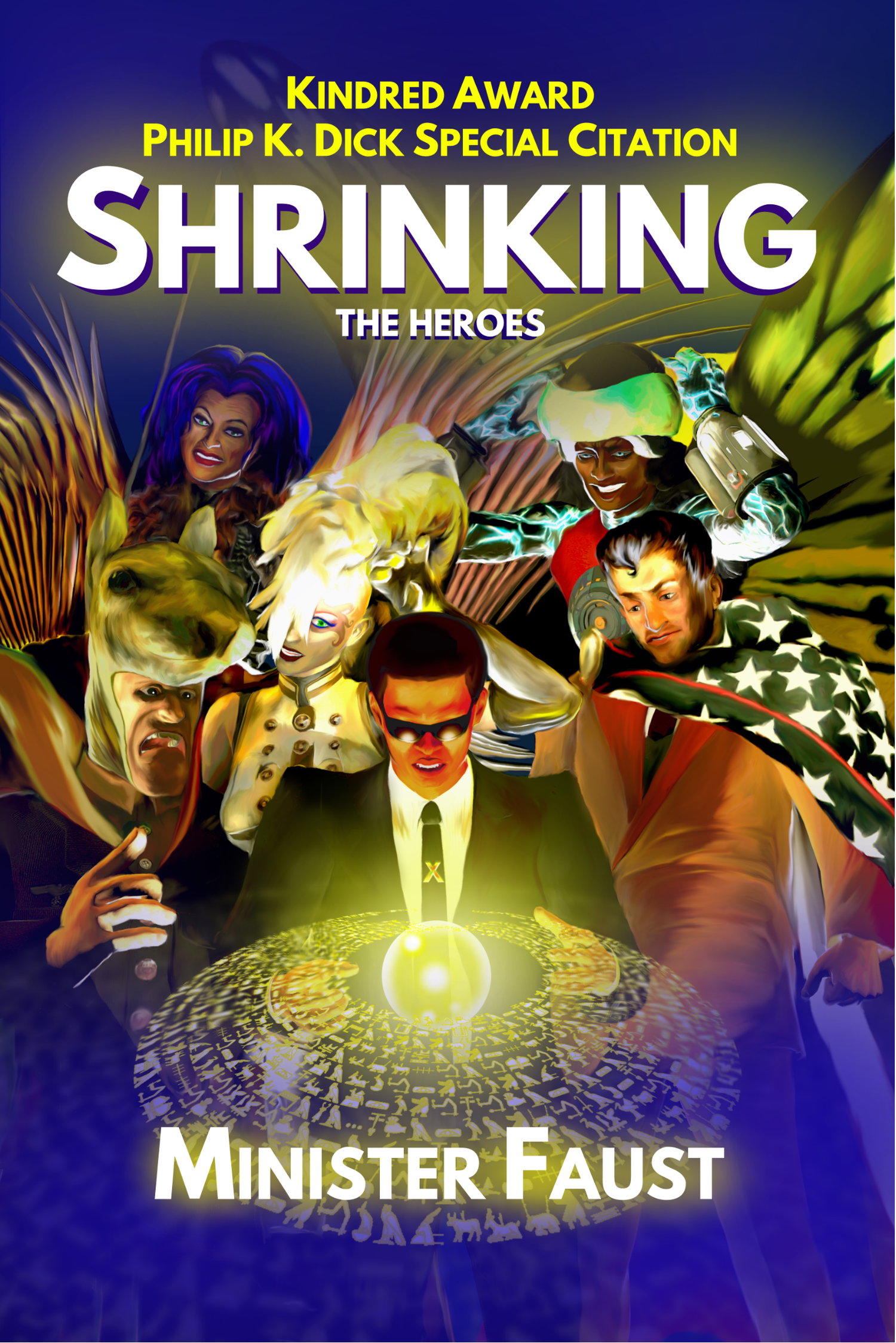 EBOOK: SHRINKING THE HEROES (previously titled "From the Notebooks of Doctor Brain")

The award-winning political satire (originally published as From the Notebooks of Doctor Brain), Shrinking the Heroes is a hilarious, outrageous, gonzo take on the Bush Administration, confirming Minister Faust as one of the finest novelists of his generation.

Shrinking the Heroes contains the book-within-a-book, Unmasked: When Being a Superhero Can’t Save You From Yourself!, a self-help book for superheroes recounting the group therapy of six of the worst and most powerful super-employees of the Fantastic Order Of Justice (the F*O*O*J).

Superbly caricaturing a range of DC and Marvel superhero conventions, while taking expert aim at the idiocy, shallowness, hypocrisy and viciousness of the celebrity industry, the cult of therapy, and the imperial US presidency, Shrinking the Heroes will make you laugh, cry… and yell.

***MAKE SURE YOU DOWNLOAD FORMAT YOU WANT (MOBI or EPUB). They don't come as a bundled download. However, you should be able to download each one separately if you choose the wrong one. If that doesn't work, email me.

ROBERT SAWYER, Hugo Award-winning author of Hominids: “Minister Faust does it again: an outlandish, outrageous tour de force by the most innovative prose stylist in the field, bar none.”

CHARLES SAUNDERS, author of Imaro: “Pure satire... laugh-out-loud comedy. Superhero parodies have been done before. So have dysfunctional super-beings, ranging from Spider-Man and the Fantastic Four to the Watchmen. But nobody has done it as well as the Minister. If Richard Pryor had ever written science fiction, he might have come up with something like Doctor Brain.... Minister Faust is shaping up to become a one-man New Wave in the SF genre.”

BOOKLIST: “An excellent superhero comedy as well as an unsettling satire.”

BOOKPAGE: “One of the most entertaining books to cross your path this year....”

SFSITE.COM: “A whirlwind of jokes, satire, obscure pop references, devastating cultural analysis and prose poetry that never lets up from beginning to end.... This is political and cultural satire of the highest sort, and Faust is earning a place among the masters of the craft.”

BLOG T.O. SUNDAY BOOK REVIEW: “A major accomplishment that is laugh out loud funny... This is the most revolutionary work of SF since William Gibson’s Neuromancer…. I’m confident in saying that this is the best SF book of the 2007 - maybe the best book of the year.”

SUNQIST BLOG: “The best book of the year... incredibly important....”

SF READER.COM: “A well-paced suspense novel packed with twists and bluffs, together with an intelligent satire on post-9/11 Western society.... Wonderfully written... a multi-layered and satisfying read.”

SCIFI.COM: “[Minister Faust’s] insane fecundity and jazzy verbal dexterity, his sheer brio and exuberance... reminds me of Ishmael Reed or Steve Aylett... plenty of moments in this novel where I laughed out loud.”

THE PINOCCHIO THEORY: “Had me laughing from the first page to the last. But the book is also a mind-boggling, multi-levelled allegory of racism and corporate fascism in America today.... Faust is brilliant.”
You will get the following files: