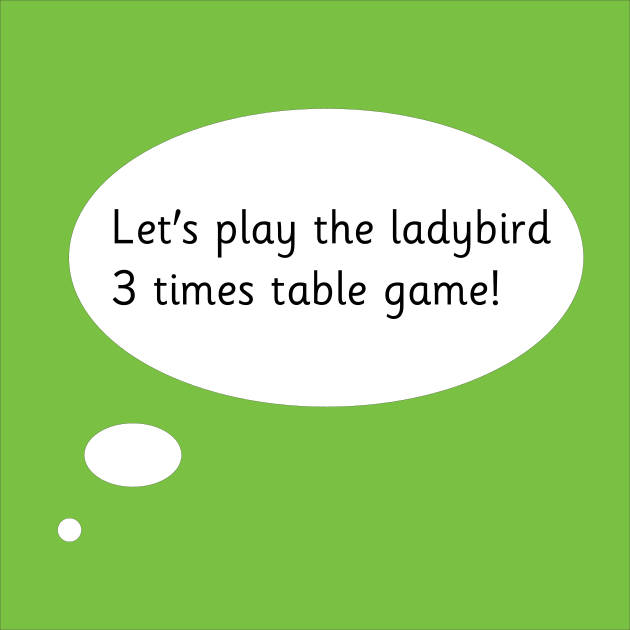 Print or make 'ladybird 3 times tables game cards' and ‘3 to 30 spinner’. You will also need about sixty counters: 1p coins, buttons, small pebbles…
Collect counters to place on the ladybird spots
☺Take turns.
☺Spin a number and collect that number of counters.
☺For each set of three counters collect a ladybird card and cover the spots with your counters.
☺Race to collect ten ladybird cards.
Pass it on On your turn, talk about 3 times tables facts. For example say, “eighteen, that’s six times three, I will need six ladybird cards”. Say for example, “Now you have four ladybirds, how many counters do you have?”

Play another day using ‘1 to 6 dice’
☺save any extra counters to use on your next turn.

Pass it on Ask for example “you have two extra counters already, how many more ladybird cards will you get if you throw a four?”

Play another day. Make some game cards showing something meaningful to your child e.g. coats with three buttons.
Pass it on Ask “what is the fewest number of throws I’ll need to win?”

Play another day. Make some game cards showing something meaningful to your child e.g. ice cream sundaes with three scoops.
Pass it on Ask “What is the least number of throws I’ll need to win”

Play another day
Collect 10 cards (ladybird or your version) and place a small treat e.g. raisin, cereal hoop, chocolate button, on each spot/circle. You will also need the 3 to30 spinner.
Spin a number which matches the number of treats to collect one ladybird card and eat three treats.
☺Take turns to spin.
☺If your score matches the number of treats left, collect one ladybird card and eat three treats!
☺Repeat until there are no treats left.
Pass it on On your turn talk about the number you are hoping to spin. For example say “ I hope I spin eighteen, six lots of three is eighteen.”

Note: your child can make lots of mistakes in the context of these games. This is a normal part of learning - don’t worry, reassure and be reassured - mistakes help you to learn.
Because research has shown that times tables tests and time pressure can be the start of a child’s maths anxiety, it’s a really good idea to encourage your child to play this type of game handling real objects, building up visual images and confidence, before trying online tables games.