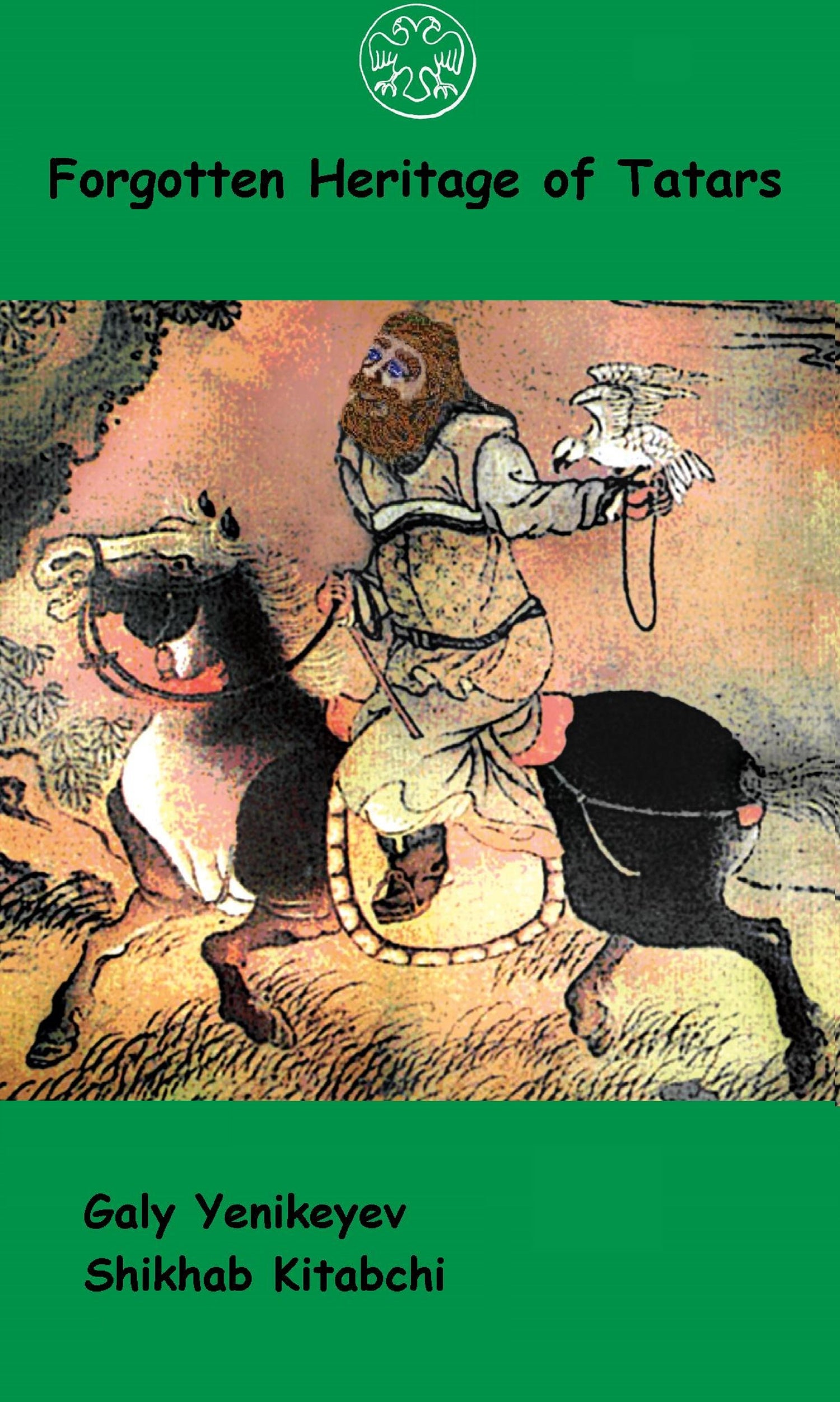 On the cover of this book you can see the true appearance of Chingiz Khan: ‘...In the ancient Tatar historical source ‘About the origin of Chingiz Khan’ the author gives the words of the mother of Chingiz Khan: ‘…My son Chingiz looks like this: he has a golden bushy beard, he wears a white fur coat and rides on a white horse…’ (35).

As we can see, the portrait of an unknown medieval artist in many ways corresponds to the words of the mother of the Hero, which have come down to us in this ancient Tatar story. Therefore, this portrait, which corresponds to the information of the ancient Tatar source and to data from other little-known historical sources, as we believe, the most reliably transmits the genuine appearance of Chingiz -Khan....’


Wishes, suggestions and reviews can be sent to: UlugUrda@mail.ru

Chapter 1. About what is this book (what we don't know about the History of the Tatars?).

Chapter 2.  Something important, but very little known about the modern Tatars.

Chapter 4. Origins of Great Tartaria (Tataria). Allies and opponents of the medieval Tatars. The Great Yasa (Yazu) as the first Constitution of Eurasia.

Chapter 5. The Kimak Kaganate and the Bulgar Khanate as the genuine basis of the Golden Horde.

Chapter 6. When the Tatars started to profess Islam and Christianity.

Chapter 7. ‘The Battle of the Ice’: an episode of the Crusade against ‘Russian, Tatars and Komans’.

Chapter 8. Who was defeated by Dimitri Donskoi on ‘The Kulikovo field’? What had been named as ‘an attack of khan Toktamysh on Moscow?’.

Chapter 9. ‘The Kazan History’ and ‘The Period of Ivan the Terrible’. ‘Definitive victory over Tatars in 16th century’ is a Fundamental lie of the Romanovs official history.

Chapter 10. ‘The Time of Troubles’ in Moscovia - what was that. The Volunteer army, led by Kuzma Minin and prince Dmitry Pozharsky from Tataria.

Chapter 11. The Double-headed Eagle is a Tatar symbol on the arms of Russia.

Chapter 12. The Jesuits penetration into Moscovia and the accession of Romanovs. The ideological - political subversion against the Great Horde and a nonclassical conquest of Tataria.

Chapter 13. Some of the very large numbers of Tatar toponyms of Eurasia.

So I would like to inform you about my researching work on the very little known History of the Tatars. It should be said, that I have written my work as a private and an independent researcher. After researching historiography during quite a few years, since my youth, I had derived some valuable conclusions about the real History of the Tatars, I guess.

The work (the book) on the Tatar's History, with a subject like my work, was written by Tatar historian Labib Karan in 1961 and printed out in Istanbul (Turkey). That book was named ‘The main origin of the Tatars’. But this work of Labib Karan, unfortunately, became unknown for several reasons…

In my researching I made use of works of serious historians and orientalists – V.P.Vasilyev (19th century, Russia), Akhmed Zaky Validi Togan (Russia - Turkey), L.N. Gumylev (Russia), G.V. Vernadsky (USA), and others.

I have also put to use some original sources, including information from ancient (9th-17th centuries) oriental, European and Tatar historical memorials (documents).

Now I have my own point of view on this matter that considerably differs from universally recognized one about the History of the Central Eurasia and of the Tatar nation. The central idea and core of my work is 'Chingizism', or 'honoring Chingiz Khan and his descendants and their clansmen and companions and considering oneself as their descendants and associates' (22).

This trait, although was not 'put on display', has long been inherent in the Turkic peoples of Central Eurasia, including the Volga region and the Urals (ibid.).

As a result of my researching work on the history and ethnogeny of the Tatar nation have been printed five my books and several articles in Russia in 2005-20017.

My books are about the History of Central Eurasia and the medieval Tatar nation, who founded Mongol Empire under the leadership of Chingiz Khan. (It should be explain right here, that the word 'Mongol' on the old Tatar language meant ‘Eternal’). Also the book has some concealed data what meant words ‘Mongol’ and ‘Tatar’ (‘Tartar’) at that time (period) and other interesting information, I think.

I quote here below the preface (review) to my first book ‘Chingiz Khan and Tatars: myths and reality’ - this book is the basic part of my researching work on the History of the Tatars. It has been published in Russian language, in the city of Kazan (Russia, the Republic of Tatarstan), in 2007. The review was written by D. M. Iskhakov, the Doctor of Historical Sciences and the Chief Researcher of Sh. Marjani Institute of history of the Academy of Sciences of the Republic of Tatarstan:

'The original view on the History.

This book by Gali Yenikeiev, offered the readers, is not an academic history of the Tatars. But it cannot be classified as so-called ‘folk history’ (popularizing works in the worst sense, written without proper use of facts and appeal to conceptual approaches).

In this work by Gali Yenikeev, written in a popular science form, has been expounded a new viewpoint on the origin and the development of the Tatar nation, this viewpoint was elaborated by some progress-minded historians.

This work also contains a consistently, logically and well-grounded combination, continuation and elaboration of well-known 'Mongolian' and 'Turkic-Tatars' theories of the origin and ethnogeny of the present Tatar nation. It should be observed that this book cannot be called as a popular science work merely.

Positively, there are popularized works of noted scientists such as V.P. Vasilyev, L.N. Gumylev, Akhmad-Zaky Valydi Togan and others - however, their viewpoints are developed further in this work - as a matter of fact, there’s a new viewpoint on the medieval history of the Tatar nation…

I think, this book will be of public use as a 'mental pabulum' also, because a very few of our compatriots have a true notion about Tatars, especially as they don’t have more or less objective information about the history of this Nation…’ (37, pp. 3-4).

My second book has been published by the Moscow Publishing House "Algorithm" in 2007 and republished last years. Three following my books have been published with the financial help of my readers and adherents.

This book is founded on the contents of my previous books. In this book (as well as in my other books) I tried to explain you, how and why the real History of the Tatar nation was distorted by the historians of the tsars Romanovs and the Bolshevist-Soviet regime. Also I state the point of view which considerably differs from the conventional.

The viewpoint, stated in my books, is also based on the stories which told us our forefathers-Tatars, namely, my work consist not only official information on the Tatar’s history. That is to say, it is not only 'official' history' of the Tatar nation.

I also dare to say, that my books and the idea and the subject of them have an international and a geopolitical meaning. In my books is told about the medieval Powers of the Tatars, which had stopped the expansion of the Chinese and the Persians to the West of the World.

And the burden of the content of my works is that - the Nation, leading creator of these Powers is alive hitherto. But the Tatars have not their complete and real History, because it was concealed and forced to forget by their political competitors and their followers.

I believe also, that the real and complete Historiography of the Tatars, that I am trying to restore, can and is to be the basis of the Renaissance of our Nation.

I hope the subject matter of my work would be interesting for you - readers of English-speaking countries.

Yours respectfully: Gali Rashid ogly Yeniky.
You will get a DOC (5MB) file