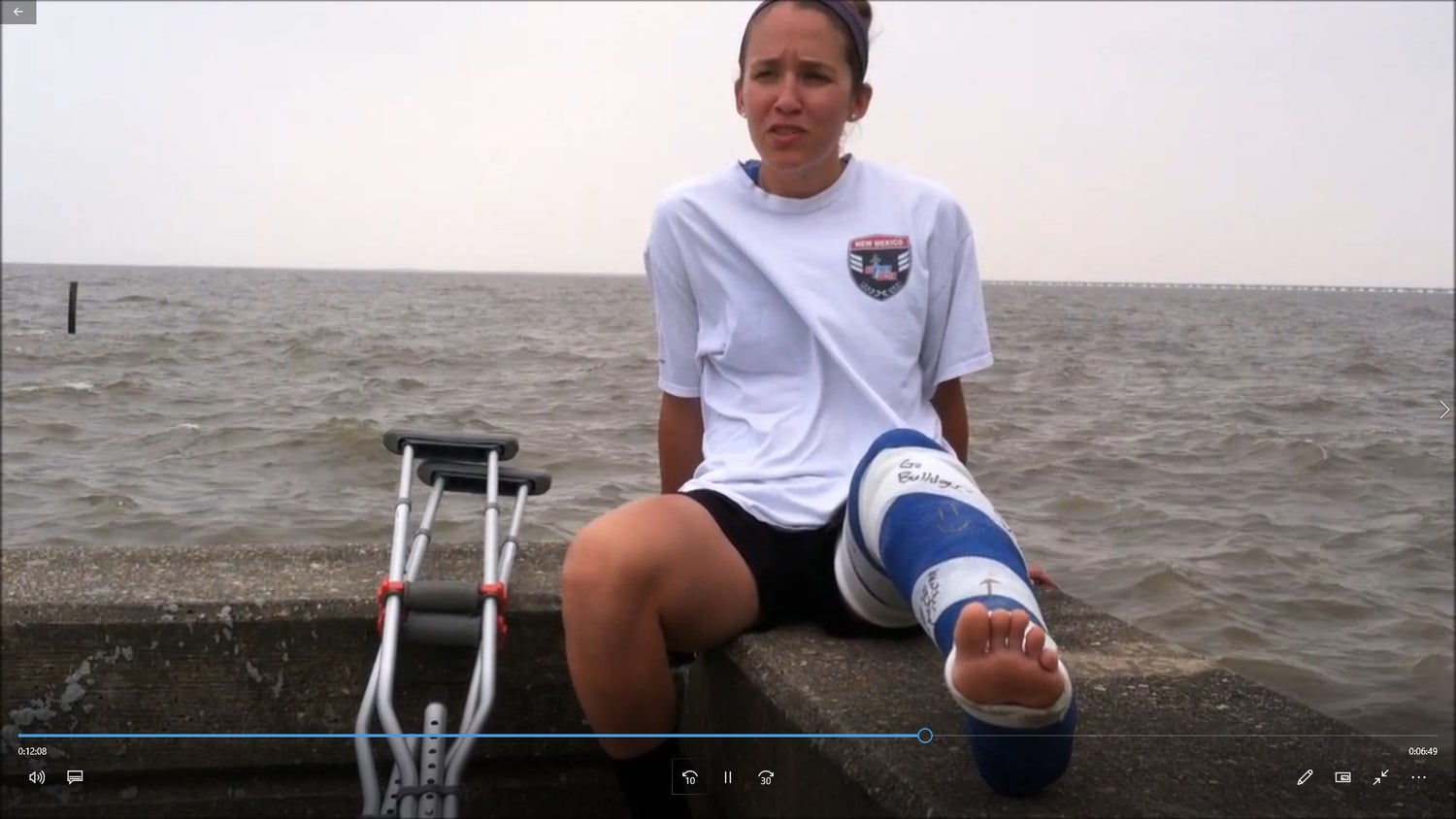 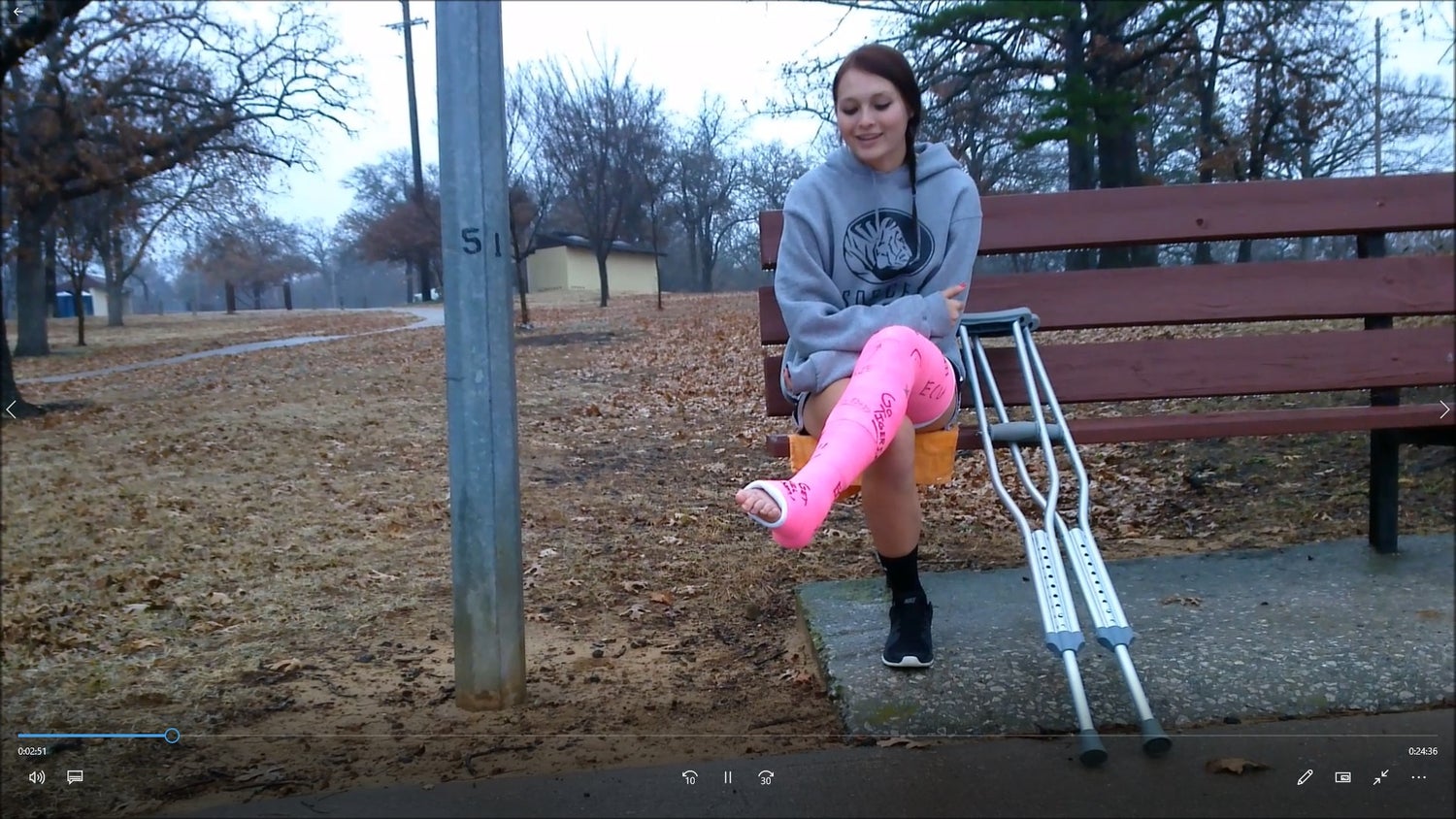 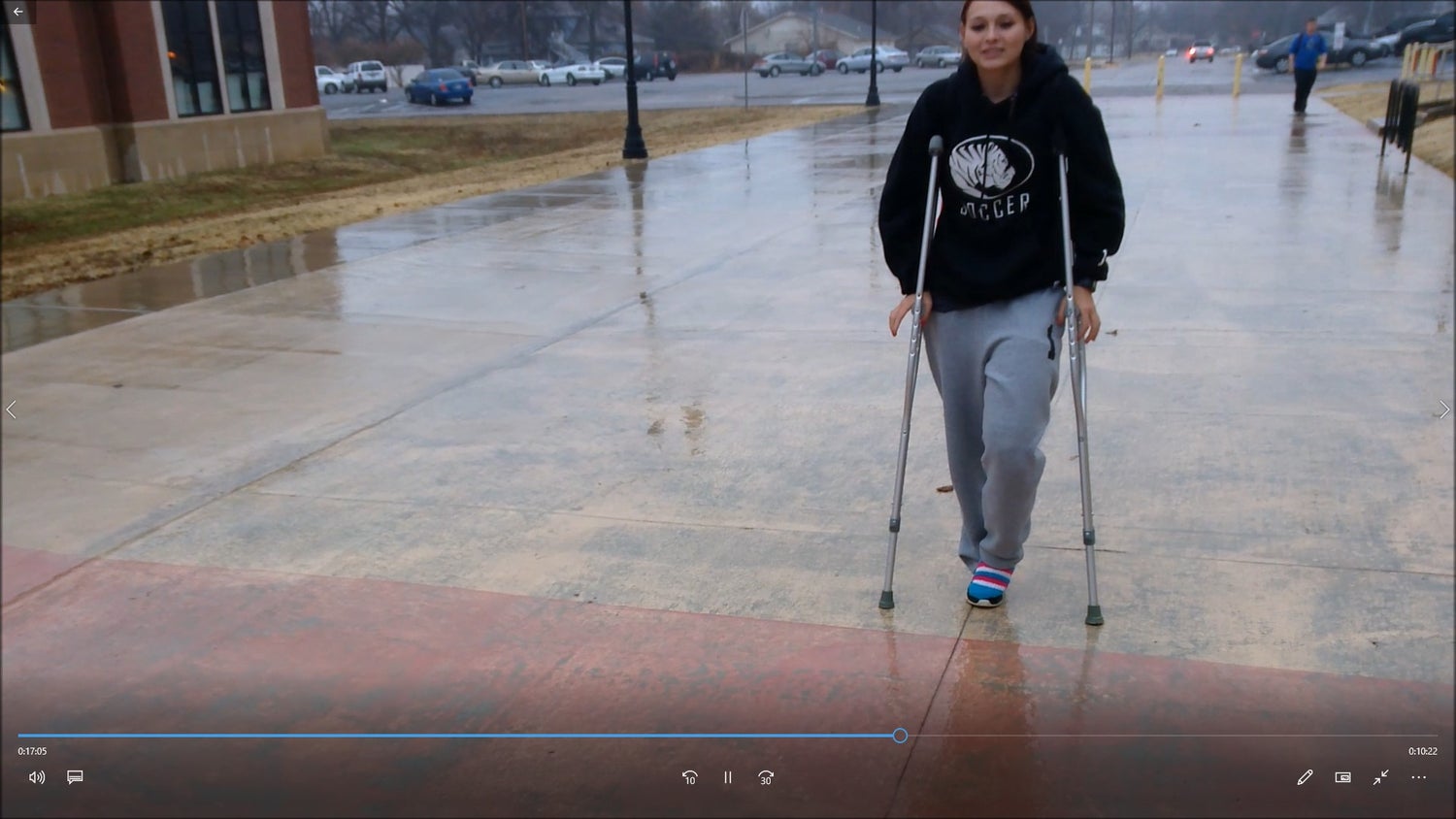 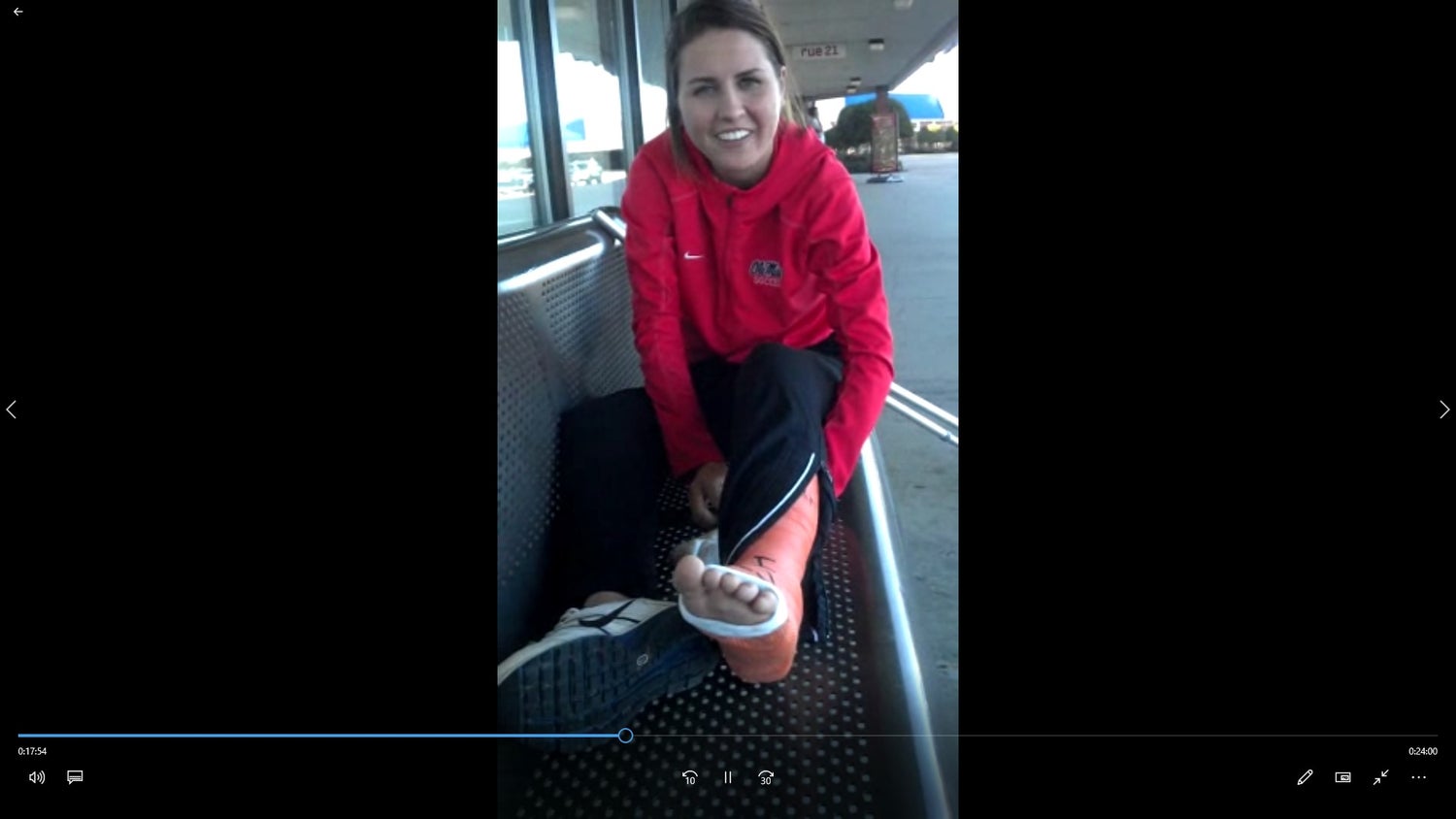 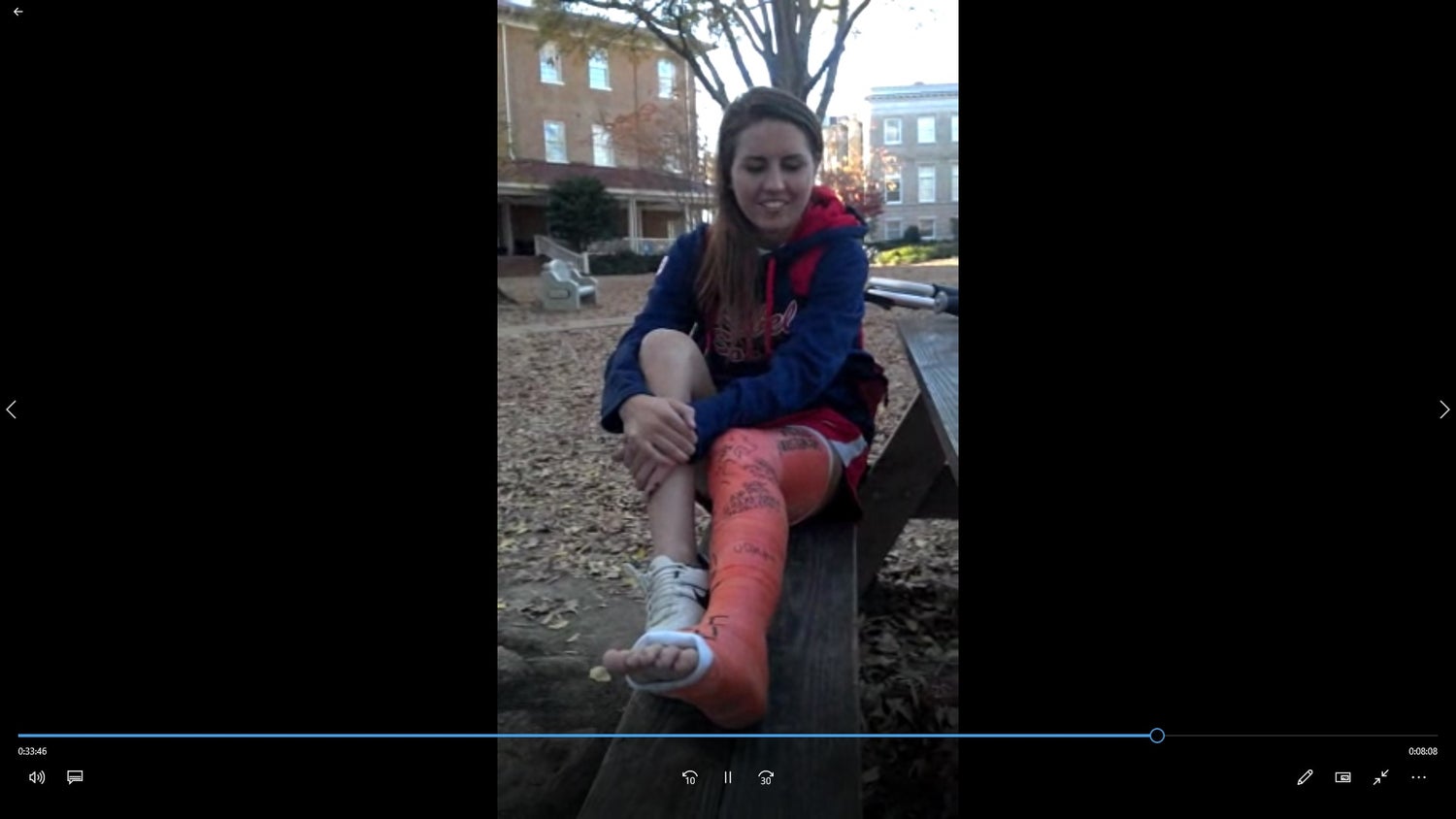 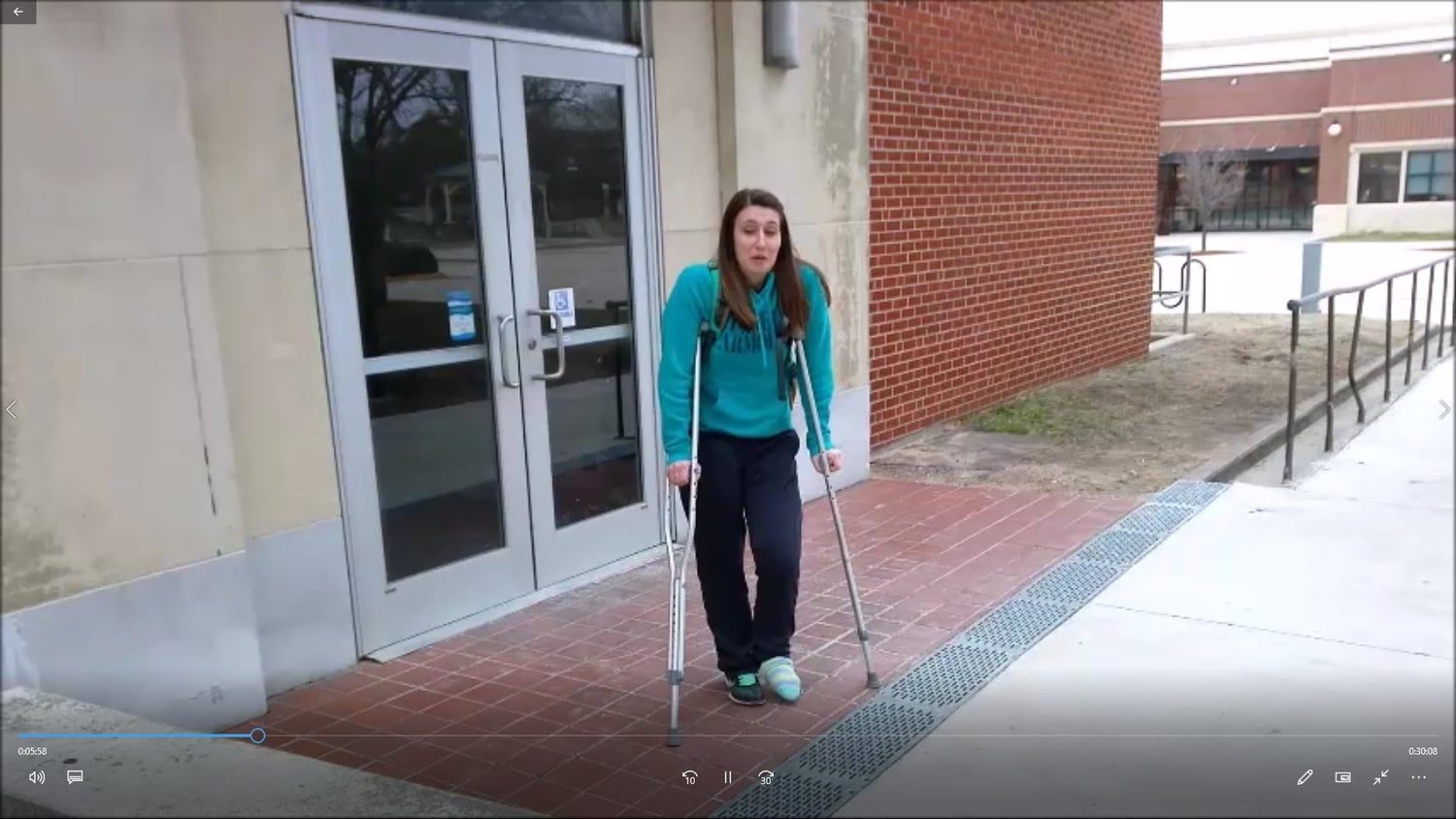 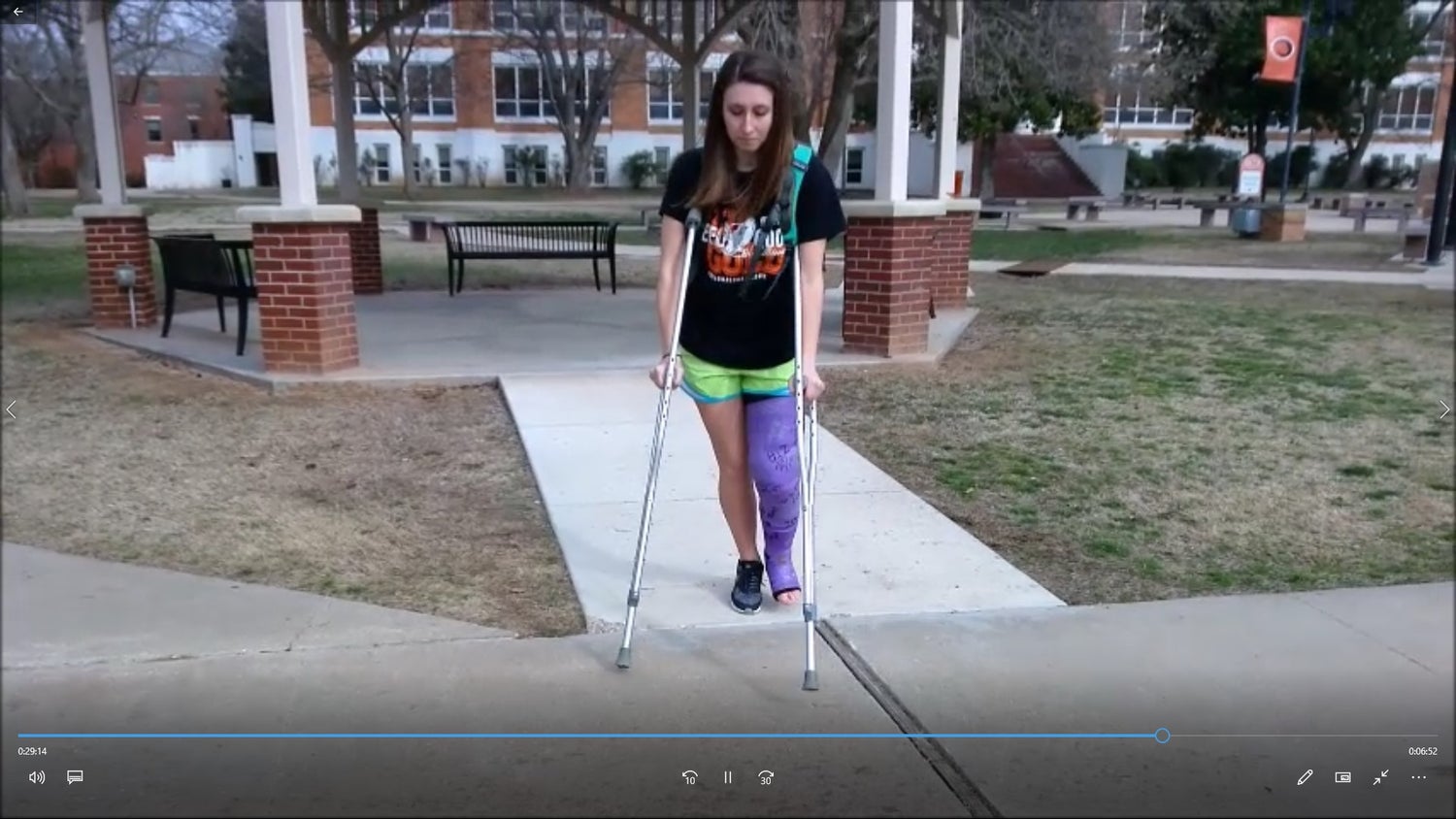 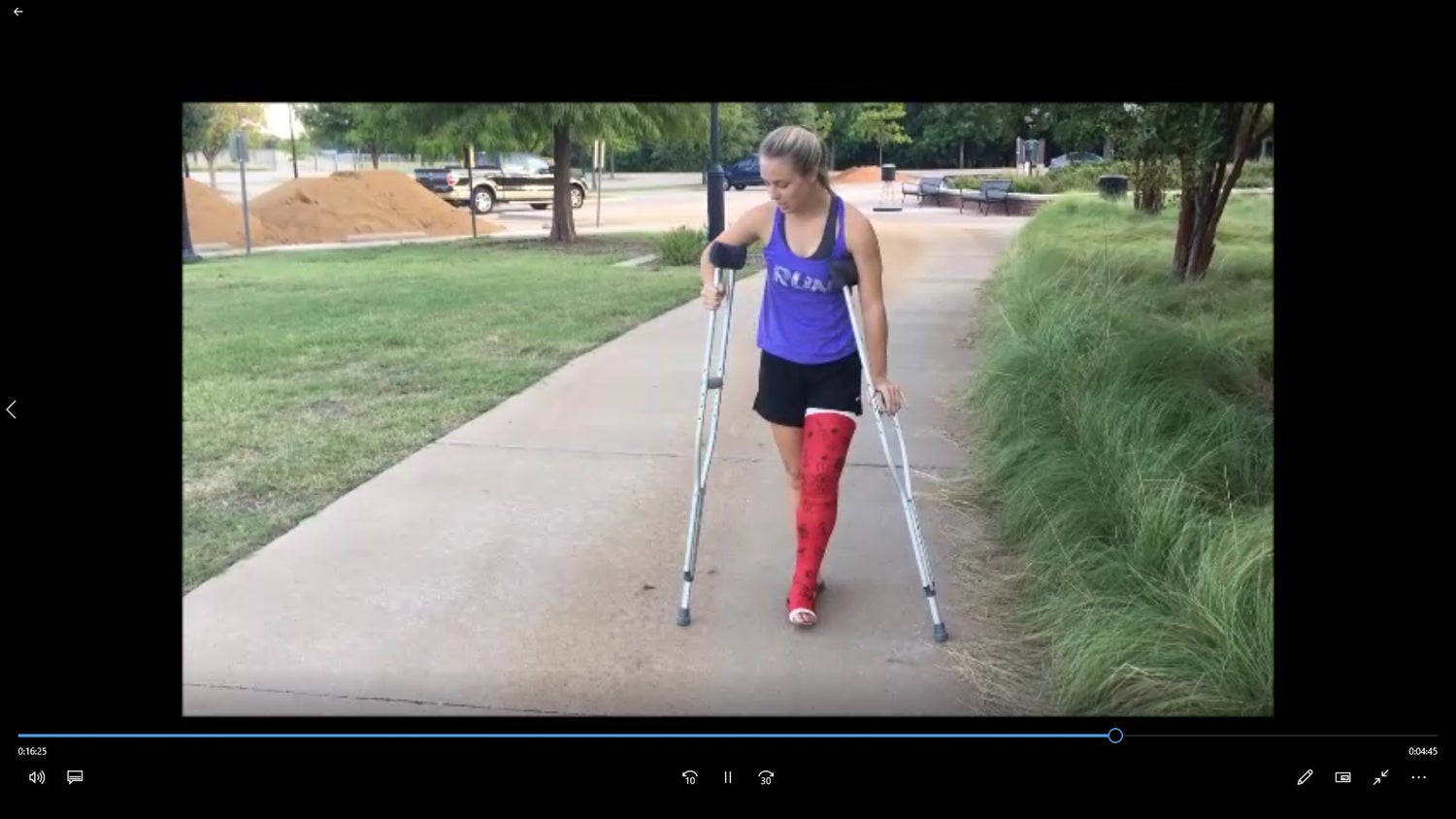 Blue and White Spring Soccer LLC, 19 mins. (c. 2014), Uncut version! You see the injury as she charges with a soccer ball towards the camera.  Her lamenting her injury while in a giant inflatable vaccum splint on the field.  You also see her crutch gingerly without her shoe with just her long soccer sock towards the car, and then also barefoot before she ends up crutching in a blue and white full leg cast! She calls a friend to tell her about it before crutching out to the field and going in more detail.  She has the most wiggly toes so they're constantly flexing and moving during her discussions about her cast.  Next she crutches to the car before heading to the lakefront for more expert crutching and cast talk.  All the while she wiggles her bare toes, flexing her nicely exposed sole of her foot.  She finally crutches towards a swinging bench where she rests and describes in more detail what it's like having her bare toes protruding and how she likes the attention of her now heavily signed cast.

Hot Pink LLC, 27.5 mins (c. 2014), Uncut version! We meet this athletic young lady clad in a full length pink cast from her mid-thigh to the base of her toes as she crutches down the hill, bare toes and all, to sit on a bench and descibe in detail her soccer injury that resulted in her breaking her leg. She goes into detail about the casting process and how it felt before crutching up the hill to the car. Next she emerges in sweats with a fuzzy sock pulled over her toes and she shares that it's not her first cast. She details a previous experience in a short leg cast and talks a ton about her range of motion before another long crutching scene where she discusses her wardrobe limitations, and how she feels about her toes and efforts to keep them warm.  She clearly has a ton of crutching experience and it's on full display throughout this clip. We pick up a few weeks later, she's on campus with another pair of sweats and a new fuzzy sock draped over the cast.  She talks in great detail (some of the best cast talk we've ever had) about the cast and the attention she gets and what she likes and doesn't like about being in a big cumbersome cast, her toes wiggling under the sock all the while.  She rolls up her pants to display the huge cast before crutching of to another class.  The clip ends with some light hopping, toe wiggling, and pov shots of her perfectly made pink LLC.

Orange Soccer LLC, 42 mins (c. 2012), The clip begins with a soccer player in a lot of pain as she cries and moans at her clearly broken leg.  There is a ton of sobbing, talking, and crying as she lays on the field in obvious pain and discomfort.  This is one of the best real pain injury videos we have shot.  She then is on the field, having calmed down a bit, with a massive vaccum splint surrounding her leg.  She continues her sobs as she wonders what will come next.  We see her emerge in the next scene, her soccer sock and cleat still on her right foot, but her left leg entirely clad in a giant orange long leg cast that leaves her bare, red painted toes exposed.  She is a solid crutcher as she hobbles to the car.  Next she crutches back to the field in her team track suit to rest and tell you all about her injury and her feelings, obviously melancholy.  Next we see her in a big box store crutching around and even using a wheelchair for a little while to find some socks.  Later, she's wearing pants over the cast again and a white wool sock over the toes.  She has a ton of cast talk as she sits and talks about her injury, the attention she gets, how long it takes her to get ready, and she even takes the sock off and flexes her toes, before continuing her crutching. There's also an extended crutching scene around campus with her bare toes and bright orange cast with white stockinette in full display, extending underneath her soccer shorts.  She also has another outfit change, more cast talk and toe wiggling before the last scene which features her pulling red pants over the cast, and her crutching NWB with a cast shoe and eventually barefoot as her cast has been removed.  A total, all encompassing LLC clip.


Purple Campus LLC w/ Black stockinette, 36 mins (c. 2015), This cute nursing major slipped down the stairs on campus and broke her leg.  Now she languidly crutches back to campus with a fuzzy sock on her foot and sweat pants, careful not to put any weight on her leg.  She leaves you guessing as to what is under her pants (though the outline may give it away) until she stops, tells you the story, and pulls up her pants to reveal a massive purple leg cast with black stockinette going way up her thigh and covering all but her toes.  There's lots of POV moments in this and lots of cast talk.  It's her first time in a cast and on crutches but she's managing, despite the backpack on her back and the weighty cast.  There's more talking while she crutches and the clip picks up with her a few weeks later, with new pants and the same fuzzy sock over her bare toes.  She stops and reveals her cast now has numerous signings and shares more about how she has been coping as a busy college student on crutches.There's a small toe wiggling clip in the car, before more crutching in sweats, this time with bare toes protruding from the cast.  She stops for more cast talk and an extended toe wiggling scene both with and without a sock.  Later, she sheds her sweats for shorts, and the cast goes all the way up to the base of them.  She shows off all her signings talks about life in the cast more, and does a good comparison and contrasting of the cast and her good leg.  There's some more candid footage, up close footage of her bare shapely toes as she crutches towards the camera, and more POV before she gets picked up from campus and the clip ends with her hoisting herself back into the car.

Rhory Red LLC, 21 mins (c. 2017), We see a brief shot of Rhory's soccer injury as we hear and see her in pain before she appears crutching briefly in ace bandages reaching from the top of her shorts down to her foot.  She laments that she thinks it's "probably just broken" but has to see a doctor to confirm.  Sure enough, in full uniform, with a cleat still on her good leg she is wrapped in a red fulll leg cast which matches her red toes.  She stops to show you that the cast goes all the way up her leg and shares the verdict with you. Next there's a brief scene with her heading back to the soccer stadium to support her team. We then pick up with some extended crutching, with Rhory now in a tank top and flip flop as she crutches around and even up stairs before resting on a bench for some cast talk, pov, and toe wiggling. We see her crutch to grab a soda later before she heads for a brief crutching clip around a store.  Later, she crutches around a park in her heavily signed cast before she goes to get it off.  A ton of crutching and cast talk in this clip with Rhory who is a stellar crutcher.  The clip ends with a brief barefoot crutching scene.
You will get the following files: