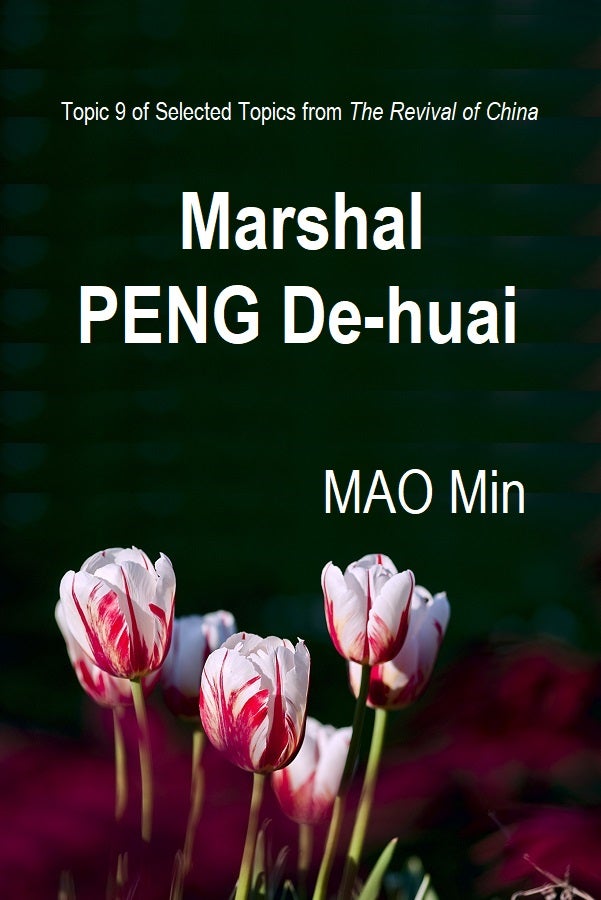 Marshal PENG De-huai: Topic 9 of the Selected Topics from The Revival of China

This is Topic 9 of the Selected Topics from The Revival of China. The full book is about the revival of China in the 20th century and the first decade of the 21st century. This topic is about the main activities in his life, including the suffering childhood, in the Hunan Army (joining the Hunan Army, promoted to Colonel, joined the Communist Party), the Pingjiang Uprising (the Pingjiang Uprising, going to Mount Jinggang to join the ZHU-MAO Red Army, staying behind in Mount Jinggang for garrison), the Red 3rd Army Group (attacking Changsha City, the Fourth Counter Encirclement and Suppression Fight, the Fifth Counter Encirclement and Suppression Fight, in the Long March of the Red Army) , the One Hundred Regiments Battle (the One Hundred Regiments Battle, in the Yanan Rectification), fighting in Northern Shaanxi Province (withdrawing from Yanan Town, fighting in Northern Shaanxi), the liberation of Northwestern China (destroying the MA Army, liberation of Xinjiang Province) , the Korean War (breaking up of the war, U.S. troops landed at Inchon, establishment of the People's Volunteer Army of China, the first campaign, the second campaign, the third campaign, the fourth campaign, the fifth battle, the MIG Alley, peace talks began, the Shangganling Battle, the Korean Armistice Agreement signed) , the enlarged meeting of the Central Military Commission in 1958 (against military dogmatism, against individualism) , the Mount Lu Conference in 1959 (the early stage of the conference, a letter from PENG De-huai to MAO Ze-dong, criticizing PENG De-huai, the later stage of the conference, the enlarged meeting of the Military Commission after the Mount Lu Conference, the nationwide Against Right Deviations Movement, PENG De-huai going to Southwestern China) , in the Great Cultural Revolution (PENG De-huai’s ribs were broken by beating), the last years of life, and vindication.