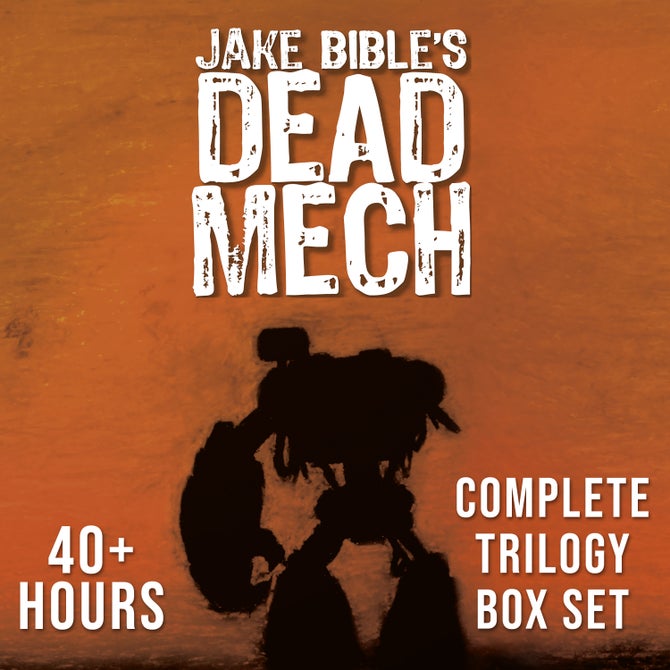 By Jake Bible Fiction
All three audiobooks in one volume!

Dead Mech- In a post-apocalyptic far future, there is only one thing that can save the fragile civilizations humanity has cobbled together: the mechs. A ragtag crew of mech pilots must battle the undead hordes, cannibal tribes, and religious cults in a daily race to keep humanity safe. But now a threat worse than anything has surfaced and is growing stronger. The undead have reanimated in their own battle machines and created the rise of the Dead Mechs!

Dead Mech is a zombie-filled, post-apocalyptic, military scifi, mech action/adventure novel like no other!


The Americans- The exciting sidequel to DEAD MECH is a hellride through Europe, Asia and beyond as American Ghost Heather Walton must save her family, her friends, and an all important cargo. The world has survived the North American zombie apocalypse, but Americans struggle to maintain their place in a world where the powers that be no longer want them. And will stop at nothing to put an end to their standing and their very existence!


Metal and Ash- Will fifty foot battle mechs be enough against hundreds of thousands of techno-zombies ready to wipe everything living off the scorched map that is the wasteland?

Alliances are formed and broken, mech pilots are made and murdered, secrets are revealed and agendas destroyed, and thousands of bodies fall and rise again

What began in the wasteland of DEAD MECH, continued alongside in Europe and Asia in The Americans, now has its epic conclusion in Metal and Ash!

Tech note: You will receive three zip files with all of the audiobook chapters for each book inside. Simply unzip each file folder and drag and drop the files into your audio player (iTunes, Google Play, etc). If you have issues please email Jake directly at jakebiblefiction@gmail.com. He'll help as much as possible!