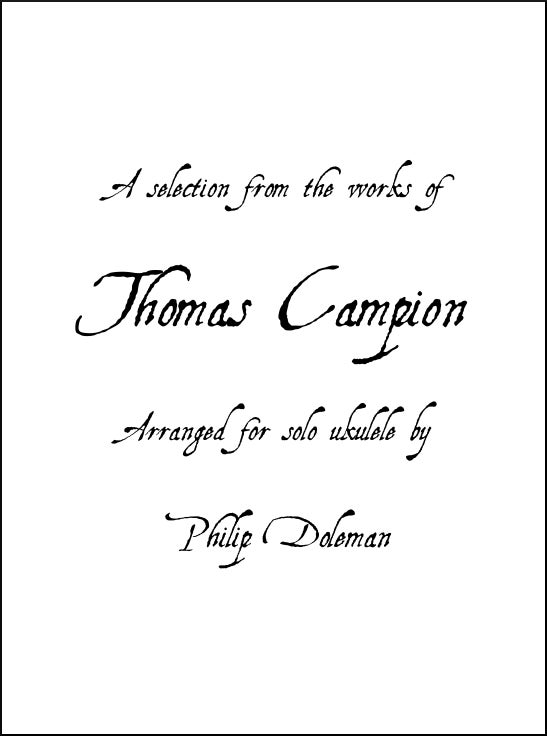 A selection from the works of Thomas Campion arranged for solo ukulele, with audio examples.
Arrangements for solo fingerstyle ukulele (high G tuning) in tablature and standard notation.

Thomas Campion (1567- 1620) was a writer of poems and songs, and author of the treatise ‘A New Way of Making Fowre Parts in Counterpoint’. His lyric poems and songs were published in his ‘Bookes of Ayres’ between 1601 and 1617. Some were moral in nature, others quite lewd.

These arrangements are an attempt to render complex pieces that would have originally been performed by one or more singers and a lutenist onto a re-entrant tuned ukulele as instrumental pieces. Each piece is slightly more difficult than the last (in my opinion) so it’s probably a good idea to start at the beginning. Remember that they are songs, and as such will be repeated several times (for each verse). Also, note the repeat marks carefully as many of the pieces (like most song forms) will have repeated lines. You may also find things that seem unusual to the modern ear, such as unexpected changes from major to minor or uneven numbers of bars, so watch out for those too.

The Man Of Life Upright

What If A Day Or A Moneth Or A Year?

Beauty Is But A Painted Hell

Jack And Jone They Think No Ill

Maydes Are Simple, Some Men Say

Sweet Exclude Me Not

Vaine Men, Whose Follies Make A God Of Love