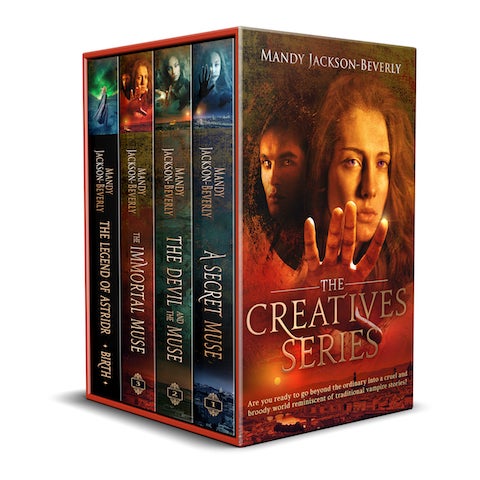 A Secret Muse - Book 1
Artist Coco Rhodes knows little about her family's association with the ancient clandestine organization The Allegiance and wants to keep it that way. She dislikes secrets; they're a painful reminder of her past.

When the arrival of a letter from her dead mother threatens her sanity, Coco demands an explanation from her brother, Christopher, a high-powered D.C. lawyer and member of the Allegiance. He insists she'll find answers in Italy, her birthplace. There she's unknowingly shadowed by Gabriel, a powerful warlock with a vampire father, and the ethereal, Prudence, keeper of the Allegiance.

After the death of a close friend, Coco's life takes a dark turn. With only a faded portrait torn from a lost sketchbook and one of her mother's unfinished paintings, Coco unravels clues from her past, in the hope of saving those she loves.

"All of Mandy's past exposure and experience pays off handsomely in this little jewel of a novel. She is most definitely a writer to watch - especially for the lovers of paranormal literature."
Grady Harp, San Francisco Review of Books, Hall of Fame Top 50 Amazon Reviewer

The Devil And The Muse - Book 2
There is no room for indecision when the devil lies waiting.

When Coco Rhodes awakens as a Creative protected by the Allegiance, a painting she's drawn to gives her a vision of a horrific attack upon a fragile young girl. The image suggests a link between the disappearance of several DC-area schoolgirls and a fraudulent financial scheme at the government's highest levels.

The vampire-warlock Gabriel vows to rescue the girls and topple a corrupt member of Congress. Meanwhile, though the whereabouts of the Allegiance's sworn enemy, Kenan, is unknown, his dark and twisted past is revealed, and his evil plan begins to unravel.

With her sense of duty tested beyond her imagination, Coco's love for her family may mean sacrificing her humanity.

This book is for mature readers.

The Immortal Muse - Book 3
The darkest depth of winter has arrived, and the voices of the dead are calling.

When images of Gabriel's past indiscretions emerge from paintings, Coco questions her present life and the purpose of the Allegiance. She senses a seductive pull, the allure of her old life fed by her inherent need for freedom, and questions if this is reality or part of Kenan's plan to destroy her.

While the third incarnation of evil gathers strength, ancient tunnels beneath a Roman villa reveal the morbid history of Kenan and his predecessors and the secret of a fatal affair. Alessandro and Gabriel devise a plan to destroy Kenan, but someone will have to cross into a realm of women who died at his brutal hand--and a woman from Gabriel's past will lead the resurrection.

To fight this evil, Gabriel must summon magic he would rather forget and a spell that endangers Coco.

"After devouring the first two books in The Creative Series, I had no problems diving straight in with this one. The author, again, grips you with both hands dragging you on a fantastic ride with the characters, literally from the first chapters. So much care and attention to detail, research and time must have gone into creating such an in-depth series. A triumphant masterpiece of vampire fantasy. It's lovely to read a series that is suited to adult reading rather than the usual YA vampire fests."
Becky Wright, author Mr. Stoker & I

The Legend of Astridr: Birth - A Creatives Series Novella complete with five, full-color illustrations
Before the Allegiance came Astridr, whose legend began long before her birth.

When the imprisoned seer Sonja is liberated by thirteen Viking warriors, a storm takes the lives of her rescuers and she's left dying and alone. The fae prince Hakon hears her cries--as does Freyja, goddess of the underworld, who arrives to negotiate for Sonja's soul.

In love and sacrifice, Sonja survives to bear a daughter, Astridr--while the bargain between the fae prince and the goddess lays the foundation for an immortal's legend.

"I've read the entire Creatives Series and love it. Well-written, interesting characters, great villain/evil, depth of research is outstanding. Grabbed me from the beginning and I zoomed through all three books and then the novella. Can't wait to read what Mandy writes next!"
Kathleen Kaiser
You will get the following files:

All information on this site belong to Mandy Jackson-Beverly unless otherwise stated. Please ask before you “borrow” anything. This site and the products on it are part of my business and livelihood. I ask you to please respect my work.