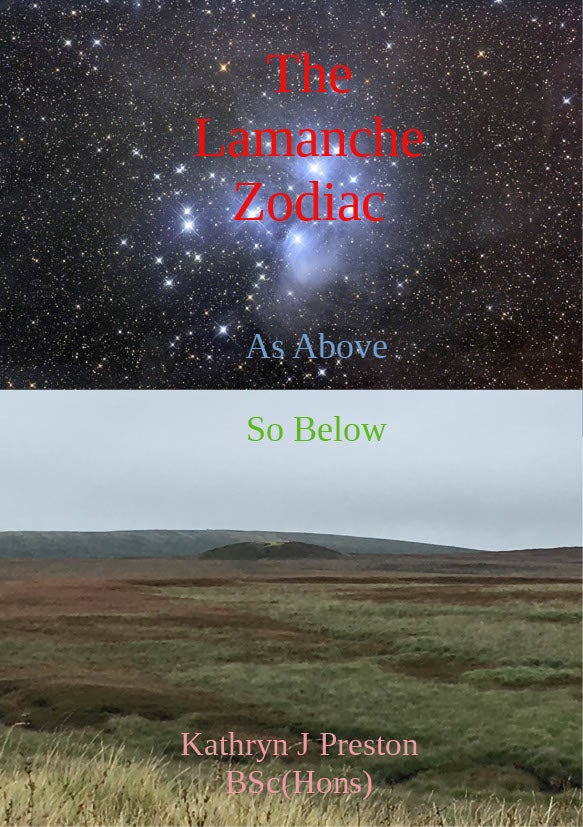 A PDF Ebook, The Lamanche Zodiac describes how the author's UFO sighting led to the discovery of the worlds largest known Terrestrial Zodiac, stretching from Garstang in Lancashire to the Cheshire/Staffordshire border. It passes through LAncashire, MANchester and CHEshire from which its name is derived. It includes information about the other known British Terrestrial Zodiacs and attempts to suggest their origins. There are connections with Arthurian Legends, Ley Lines,  the UFO phenomenon and the Ancient Alien Theory. This ebook is the first ever attempt to explain who constructed terrestrial zodiacs.

If uploading to a Kindle device or app, don't allow conversion to Kindle format.

I recommend this product

Well done Kathryn, you must have spent countless hours 'connecting the dots' on this.
It was the 'pentagonal geometry' of the Rennes-le-Chateau region in the French region of Aude/Languedoc that first hooked me into that great Mystery, in the late 70s/80s which we all know was written about in Dan Brown's blockbuster "THE DA VINCI CODE", which plagiarised the work of the 3 authors of the seminal work "THE HOLY BLOOD HOLY GRAIL". What's it all for? Aha, don't think we'll ever know the answer to that!
Show more

Very informative, certainly gets you thinking about things.
Show more