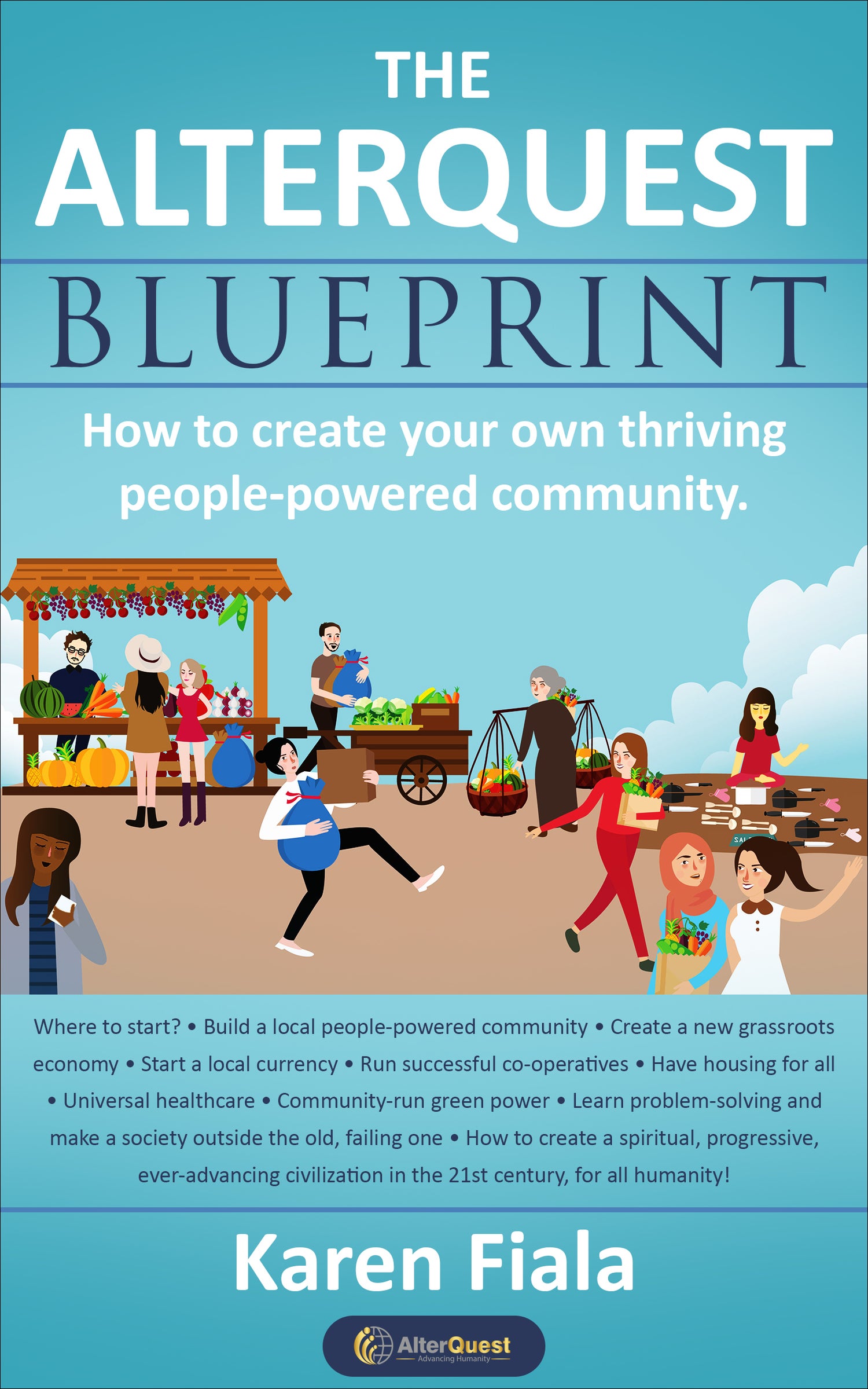 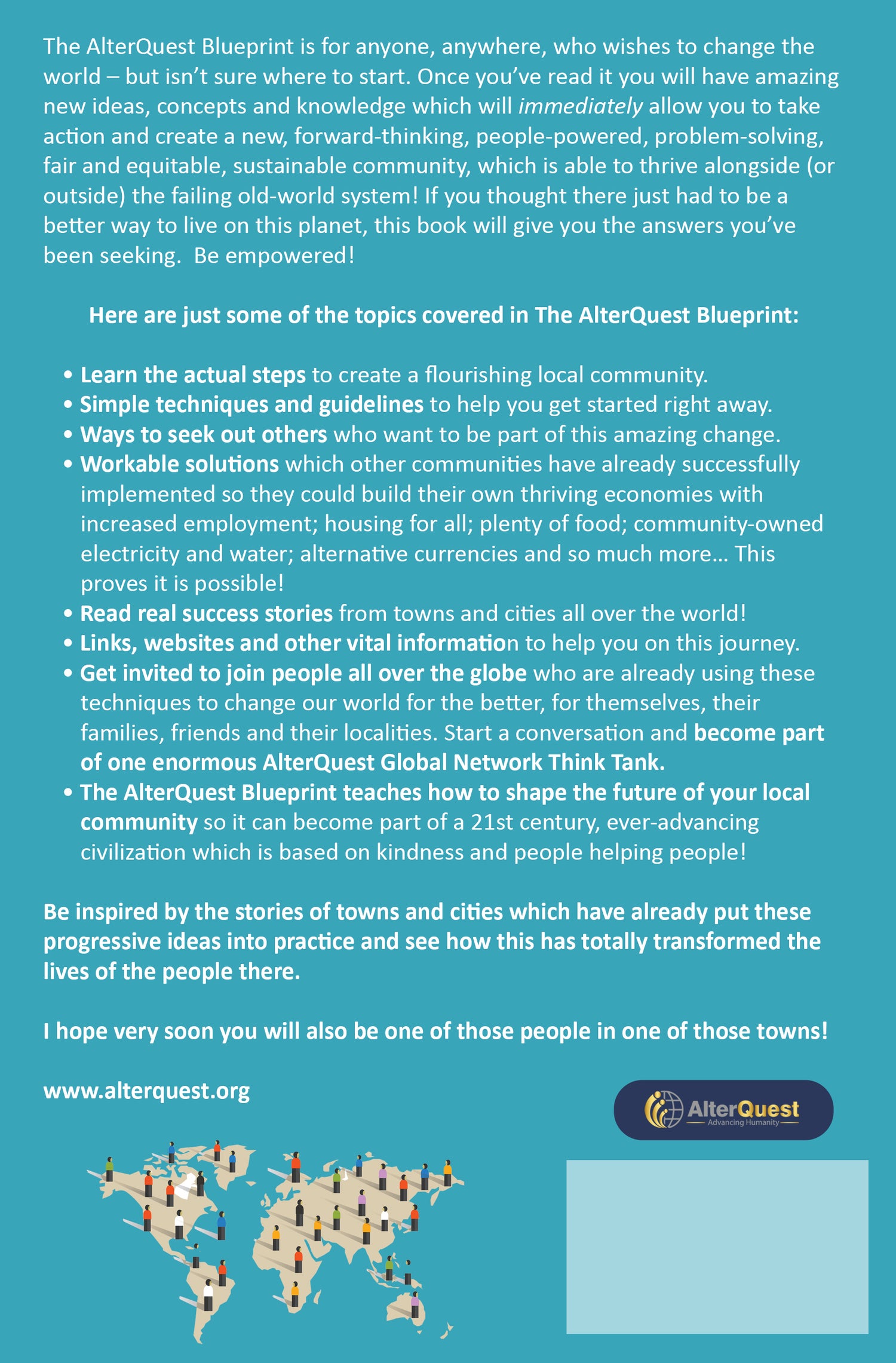 On Sale
A$10.00
A$10.00
Added to cart
The AlterQuest Blueprint is for anyone who wants to learn how to create a new type of people-powered, sustainable, problem-solving, forward-thinking community which can thrive alongside, or outside, the old-world system.

If you’ve been affected by job insecurity, lack of affordable housing, insufficient money to buy necessities or you simply fear for the future, this book is for you.
If you’re frustrated because no politician or ‘leader’ actually has solutions which can ever make life better, you also need this book.

The knowledge it contains won’t just give you hope, it will show you proven ways to create a new, sustainable, 21st century life!

The AlterQuest Blueprint is literally bursting with ideas which have been tried and used successfully in communities all over the world in order to build thriving economies, increase employment and make housing, universal healthcare, education, food, water and electricity available for everyone.
Read inspirational stories about towns which have already overcome many of the issues you now face. Learn how their citizens have put exciting new concepts into practice - and see how this has totally transformed the lives of the people who live there.
For the first time ever, you’ll realize that there truly is a new way to structure our existence - one which can be implemented easily and can take over from the flawed, crumbling old system – but it isn’t run by old men in suits who are far removed from you and your community, instead it’s actually put in place by the people, for the people! Unlike those who only talk about fixing the system but never actually achieve anything, the methods in 'The AlterQuest Blueprint' really truly work and are already being used to create a better world. Once you’ve read this book you will never want to go back to the old way of living because we can create the future and we can start right now!

Be inspired by the stories of towns such as Ithaca, New York, or Bristol, UK, where they’ve made their own currency and boosted employment, or take a look at Ungersheim in France, which has become a thriving Transition Town, where the people make democratic decisions to include things such as Fair Trade and the use of renewable green energy. Communities in Mexico, Israel, Britain and other places all around the globe are using a co-operative scheme in order to flourish and in Portland, Oregon, USA they’re making small house communities for those who would otherwise be homeless and unemployed.

The key to all these positive changes is people-power, thinking outside the box, problem-solving and affirmative action. These communities are thriving because the folks who live there decided that they had to be in control of their own destiny and not leave it in the hands of others. In this book you’ll find blueprints for concepts which can be copied and used successfully in your own locality. Here you’ll find actual step-by-step instructions so you can easily implement the same wonderful methods which have worked for others.
'The AlterQuest Blueprint' allows you to start organizing your local community network quickly and easily because you don’t have to ‘reinvent the wheel’.
Ultimately with this new system everyone can have the life they should always have been entitled to - in other words, the things our politicians and leaders promise but never deliver once they’re back in power. If we can’t rely on them, we must really start to ask “Who can we rely on?” and the answer is “We must do it ourselves!” This book affirms that we’re stronger together than we are alone! If we work alongside our neighbors and our entire community, we have the power to create a sustainable system of living which can be carried forward into the 21st century and beyond. We are all souls, having a human experience and we absolutely have the right and the might, to create the best possible world for all of us to live on.The AlterQuest Blueprint teaches you how!
You will get the following files: