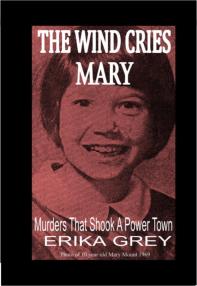 The Wind Cries Mary: Murders That Shook A Power Town

On May 27, 1969 in the sleepy power town of New Canaan, Connecticut, ten-year-old Mary Mount, the daughter of an IBM research scientist was abducted and murdered. Several persons including serial killers became suspects. A year and a half after Mary's abduction and murder, John Rice, a 17-year-old honor student and Boy Scout in New Canaan, brutally murdered four members of his family. Rice became another suspect in Mary Mount's murder. Rice found not guilty of the murders of his family by reason of insanity was released back into society after spending only five years at Connecticut's Whiting Institute for the criminally insane. The Wind Cries Mary reveals more shocking twists to the story and enlists Criminal Profiler Greg Cooper for his expert analysis concerning Mary Mount's killer and the possibility of John Rice as her murderer.

Erika Grey is a skilled researcher, non fiction writer, author of children's works, and artist. In The Wind Cries Mary: Murders That Shook A Power Town, Erika tells a story that occurred one and a half blocks from her home. Her father was an auxiliary police officer at the time, and her siblings and friends went to school with Mary Mount and the Rice family members who were murdered. With a story so close to home Erika Grey could not resist adding this work to her repertoire. For more on Erika Grey go to www.erikagrey.com