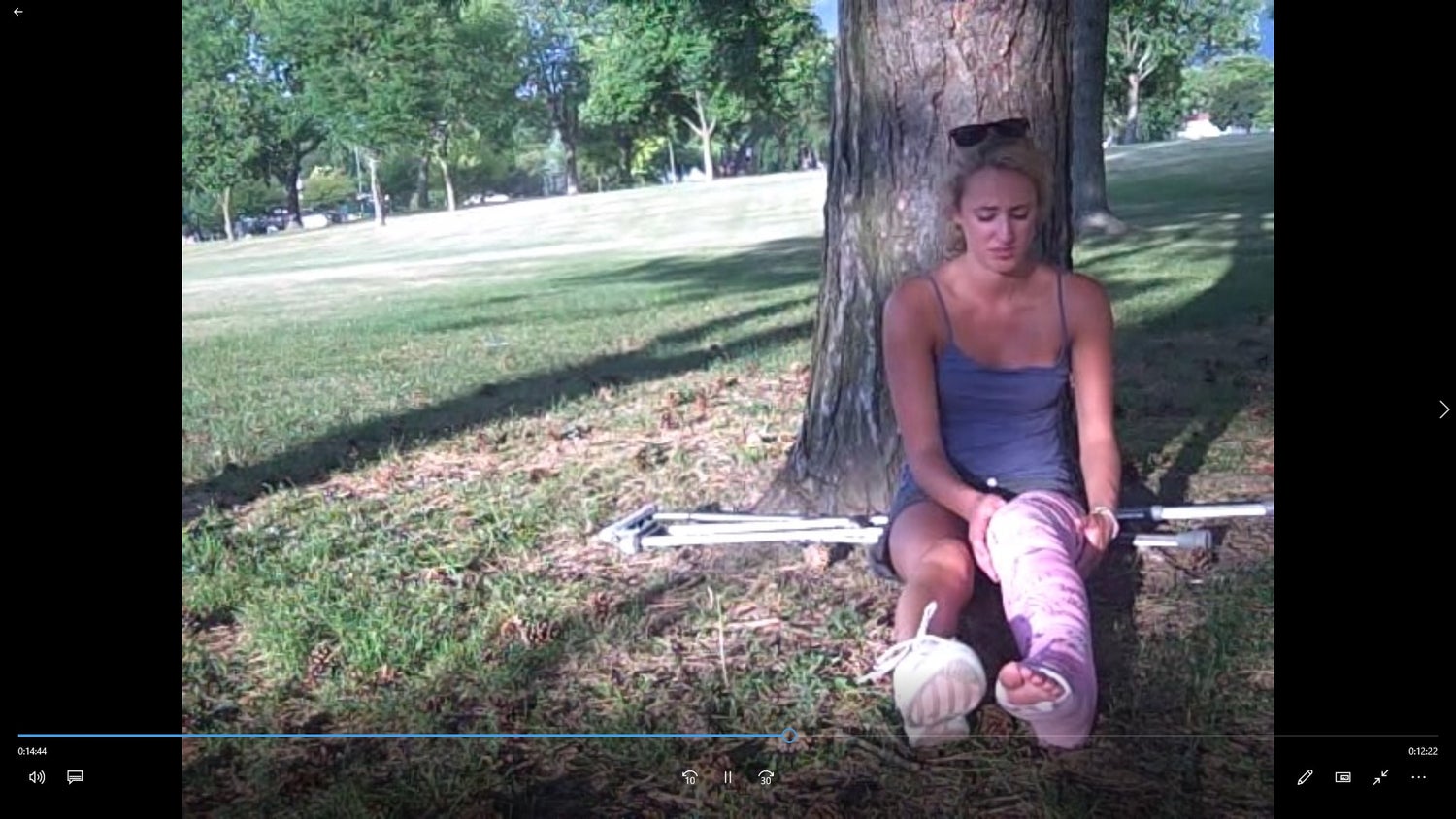 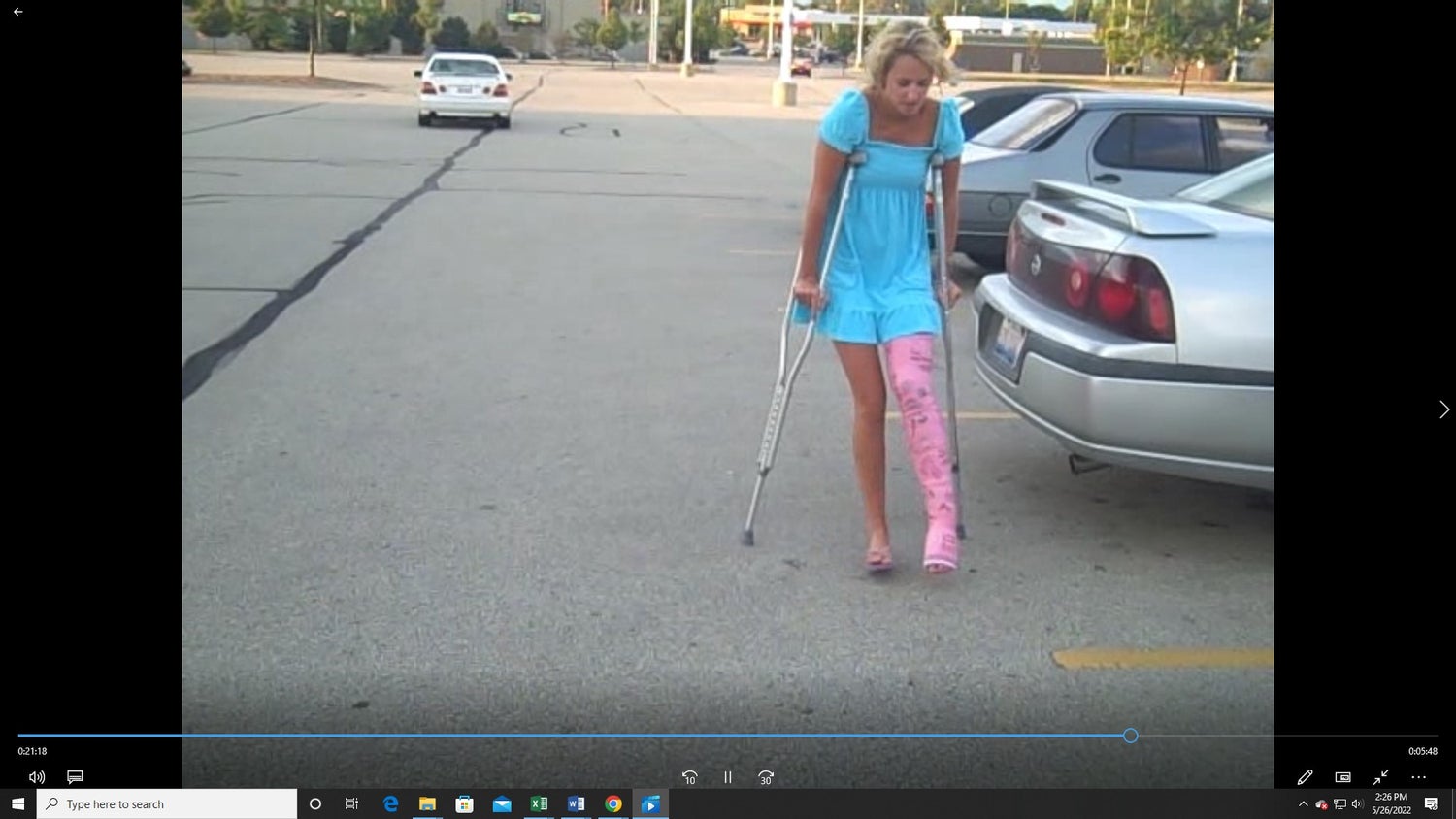 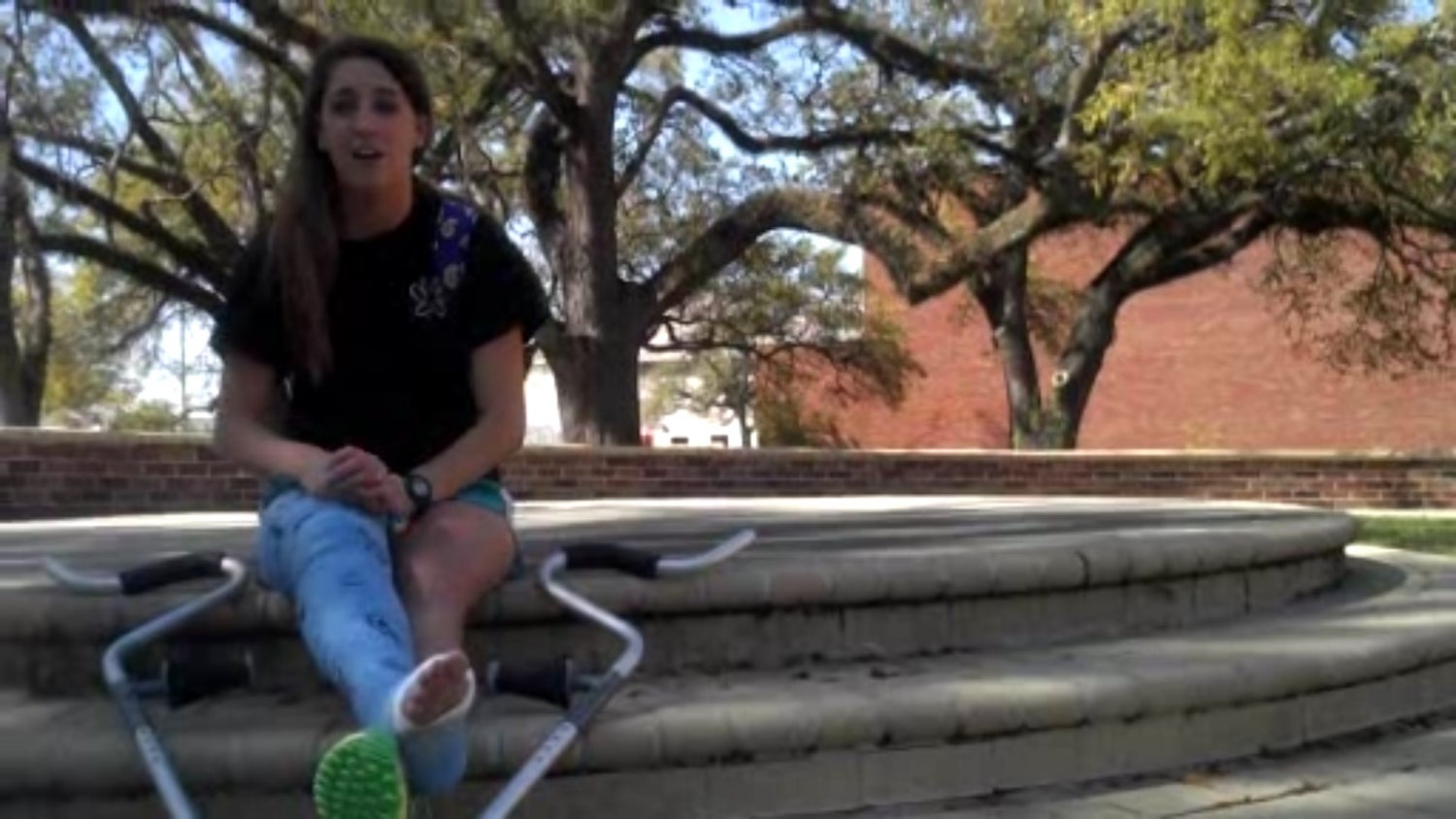 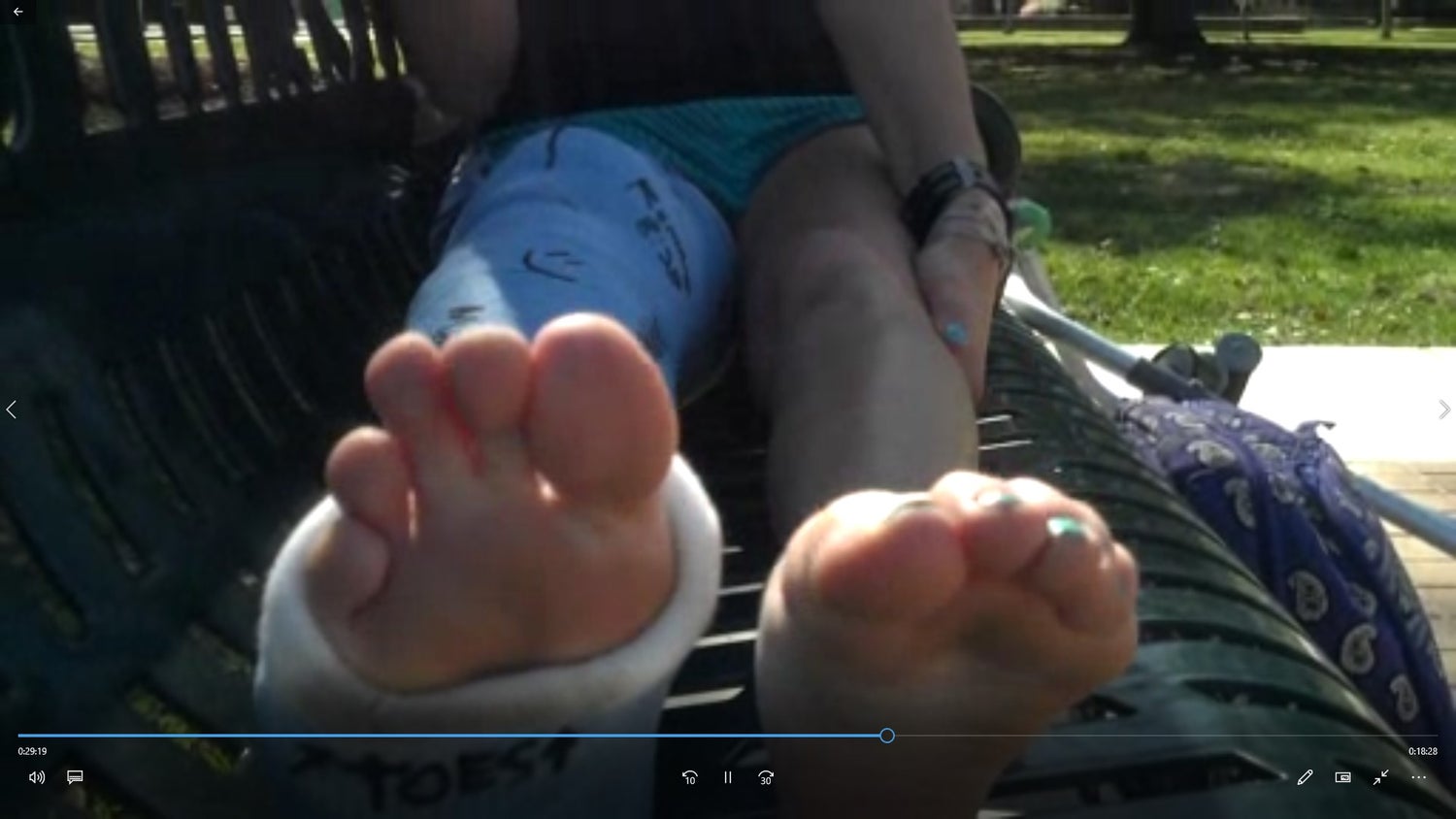 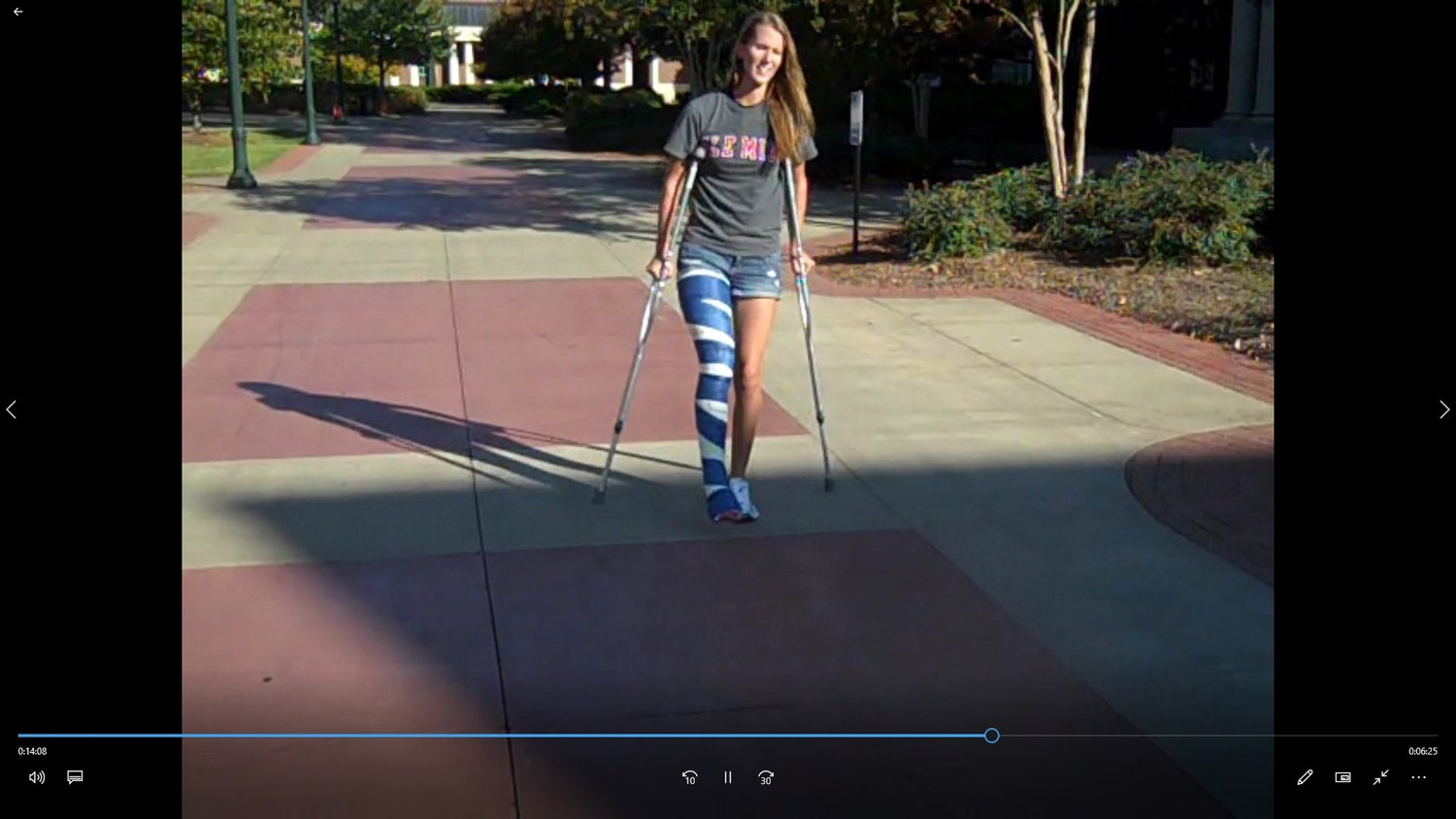 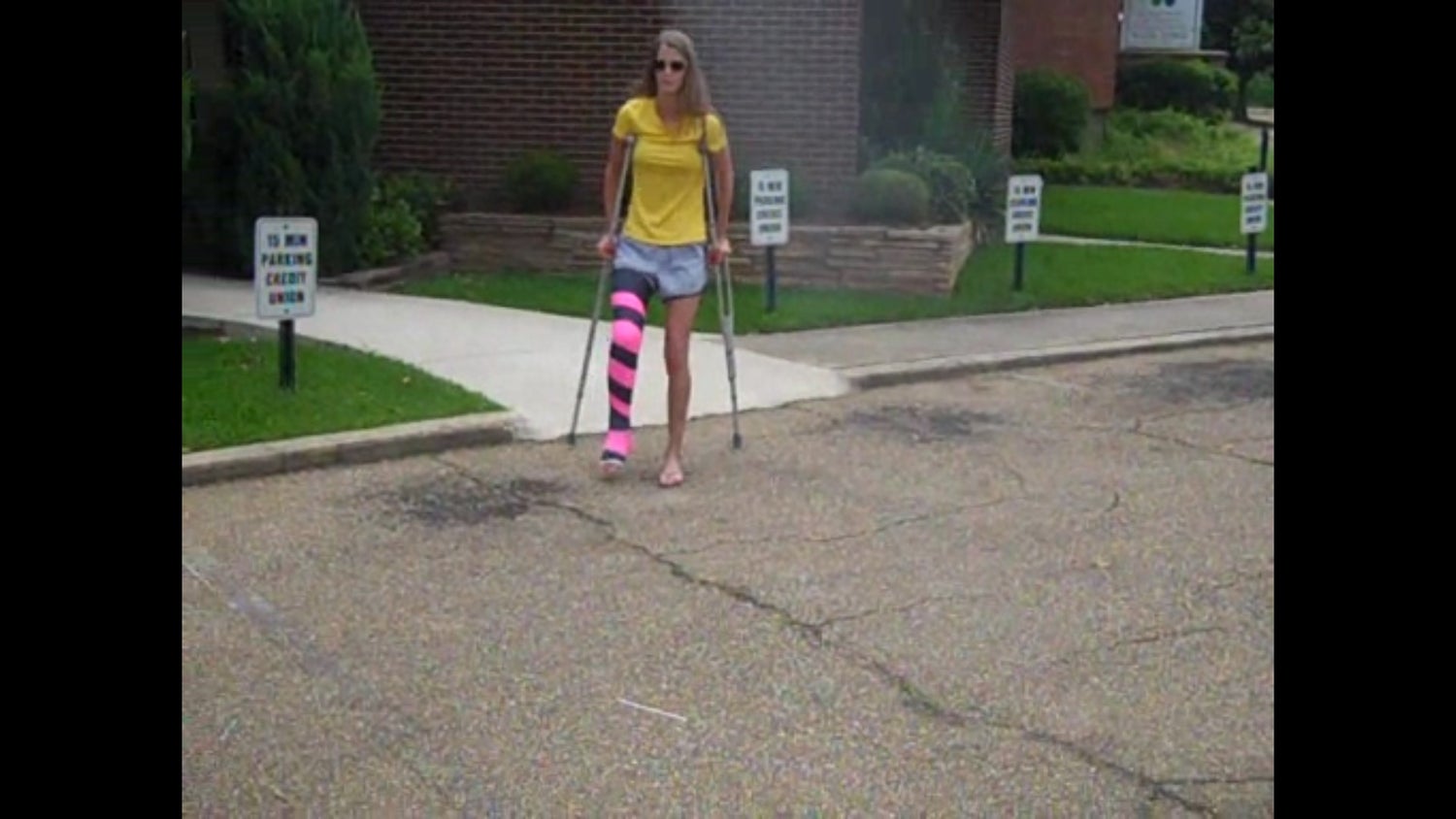 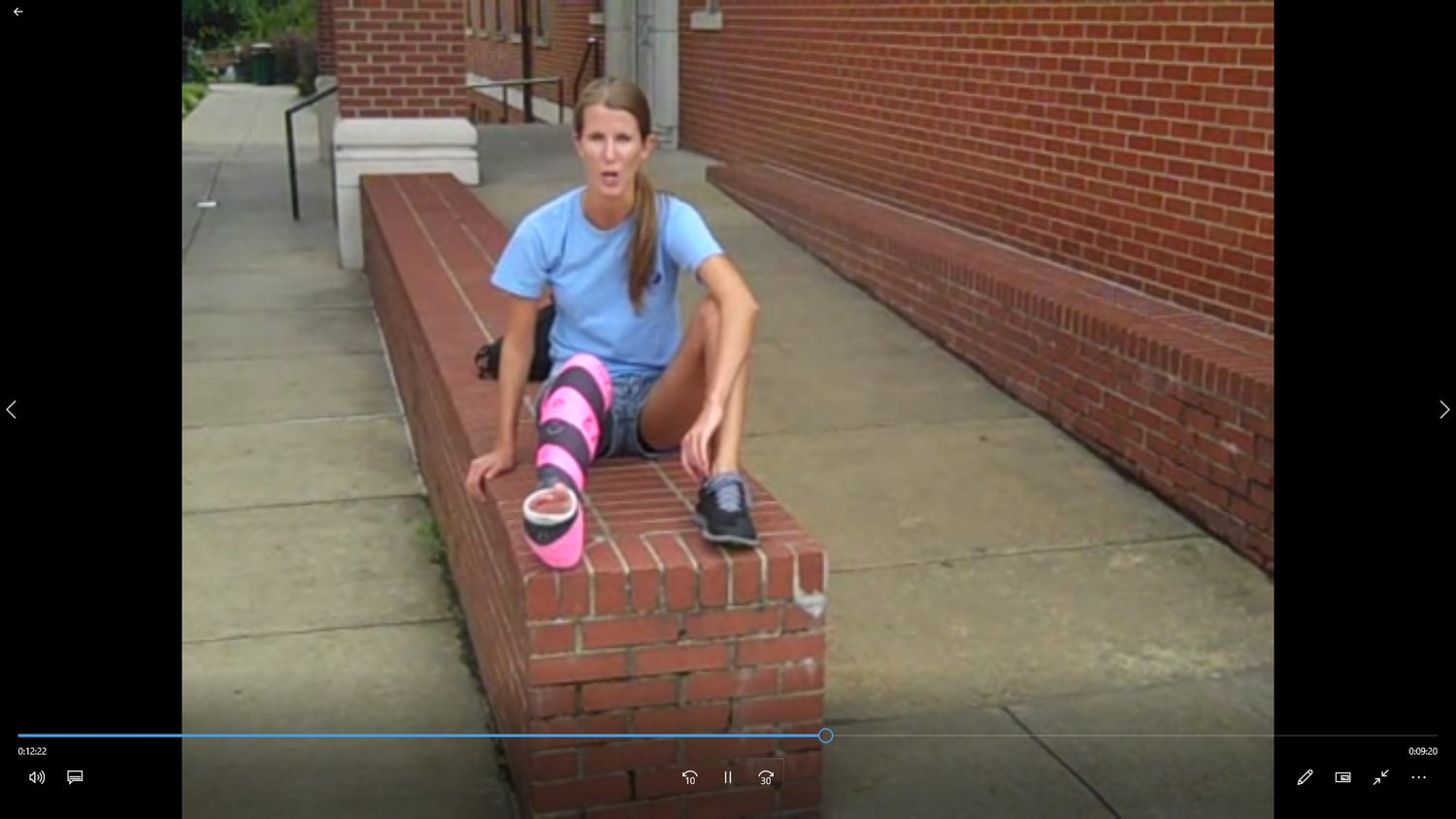 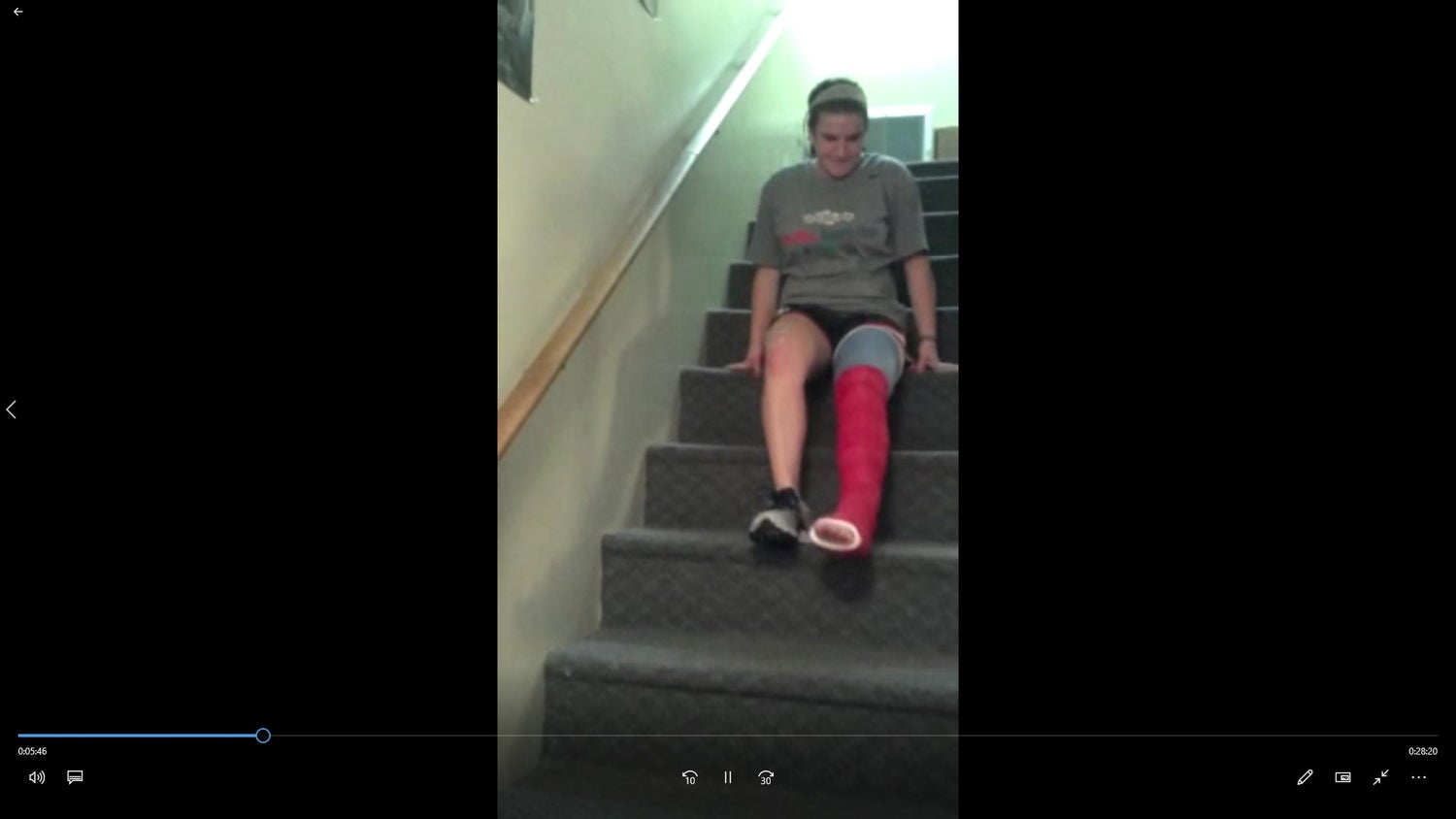 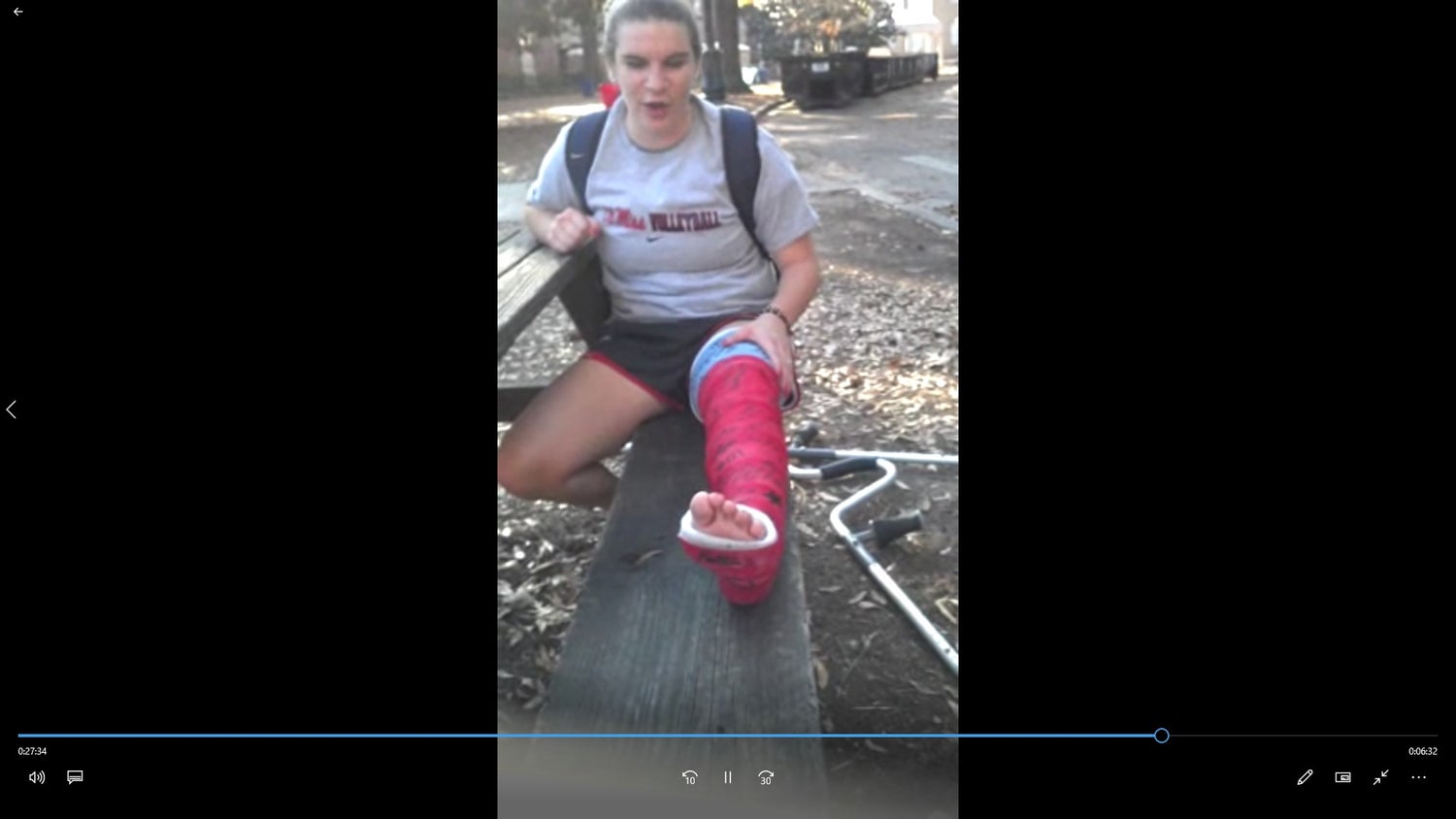 Annie Tennis Pink LLC, 27 mins. (c. 2010), Uncut version! You'll see multiple version's of annie's tennis fall that leads her to painfully lament after she unsuccessfully tries to bare weight on it "yep, I definitely broke it."  After removing her white tennis shoe and sock she examines her freshly broken leg, before hobbling gingerly off the court in her tennis skirt and top.  She emerges in a pastel pink LLC that stretches far beneath the black tennis skirt. She painfully, carefully, and slowly hobbles to a picnic table near the hospital to tell you all about the bad break she suffered, in pain while doing so.  Eventually she crutches to the car where she frustratedly cannot fit her big cast in the car. We pick up a few weeks later with Annie still in pain, the cast heavily signed and her making her way gently around a park.  She is still in pain with the colossal cast still stretching beneath her gray shorts.  She lowers herself by a tree in the shade to discuss her cast with you, giving toe flexes to the camera, and painfully discussing life so far in the cast.  The angles of this cast are both unique and real life like.  She does some more frustrated crutching, stopping to show you just how high the cast goes before she painfully makes her way into the car.  She talks about how her leg is "frozen in this position" and how sad she is that she "can't move it." In the next clip we see her in a blue dress and flip flop crutching beautifully around a store looking for socks and showing off her toe ring on her casted toes.  Lastly, she crutches to a restaurant where she sits in the booth for some POV cast talk and shows off her socked cast (which she removes), as she compares and contrasts her two legs, one tan, one pink.  A classic CCC clip from the golden days.

Caity Softball LLC, 47.5 mins (c. 2013), Uncut version! We meet Caity, a sorority girl, in not the best situation. She's fallen playing intramural softball and is a lot of pain, knowing she has done something with her lower leg.  We see a couple of takes of her moaning and crying about her injury and then being attended to by a trainer from POV who rolls her onto her back to apply a vaccum splint. Caity can do nothing but lament "it hurts," and "but it hurts" through her whines and wimpers.  We next see her emerge from a car in an ace bandage wrap holding her right leg straight as she carefully crutches into her house purse in hand. We are left to wonder the extent of the injury but not for much longer as she crutches to the couch, props her leg and very wiggly toes up in your face and calls her mom to tell her that she broke it and still wonders if she'll need cast or surgery.  In the next scene she crutches in and it seems Caity has avoided surgery as her leg is fully casted in a light blue fiberglass monstrosity that stretches beneath her shorts. She crutches to bed where she props up her leg an calls her mom to give her the update her toes wiggling all the while. She later calls her friend to ask for a ride to campus and does a POV showing the full leg cast.  Later she crutches out of the house for extended crutching around campus with a backpack on. She crutches up and down stairs and eventually stops to rest and tell you all the details that have thus far been left out about her softball leg break, as well as how it feels to be in a cast.  There's more crutching before she makes her way to a bench.  She takes her shoe off her good foot and sock and does side by side comparisons of her two legs with her teal toe polish and then there is extended toe wiggling in your face of her two feet, one casted, one sole showing. Next there's even more crutching around campus and significant cast talk as she looks forward to the cast being taken off down the road.  There's POV of her waiting for her friend and getting into a car and then she recaps life in a cast when she gets back home to her bed.  One of the wigglest toe videos we've ever shot at CCC. A true classic.

Fern #1 Blue and White LLC, 20.5 mins (c. 2011), Uncut, unedited, never before seen injury footage. This is the true director's cut which shows a number of ways Fern breaks her leg.  From jumping for a football, to doing sprints to long jumping.  You get real pain and concern in each of the versions, and can pick your favorite as Fern breaks her leg with her nike cleats, crew socks on the end of her long, gorgeous gams.  Eventually, she emerges in a blue and white striped full leg cast, one of the biggest we've ever applied to her 6'0' frame.  She crutches wonderfully despited the angle and bulkiness of the long leg cast. When she first gets to campus she has to crutch in and out of a building to show her volleyball coach about her broken leg.  Then. she makes it to campus, now with jean shorts and a shirt replacing her athletic top where she wiggles her toes and tells you about her injury before hobbling down some stairs. There's more cast talk and crutching on a bench before the clip cuts out and picks up with her crutching in sweatpants across the quad her casted foot and bare toes still visible and outline of the cast showing beneath the pants. The white stockinette is a bit dirty as she shares more about her life in the cast before crutching back to the car to end the clip.  There is definitely some never before seen footage of the injuries and ending of this clip.

Fern #2, 21.5 mins (c. 2013), Also unedited and never before seen footage of this Fern clip.  You can pick your storyline before Fern gets a Black and hot pink striped LLC.  Does she get it from  "no-big" deal shin pain? Does she get it from a broken tibia that sees her leg wrapped in a bandage-splint from toes to mid thigh? Does she walk into the doctor? Crutch with flipflops?  Crutch with a splint?  You'll see all these options in the first 4 or 5 minutes of this clip.  Regardless of which is your favorite, Fern has done real damage to her leg as she crutches back to the care gracefully in a massive full leg cast, totally encasing her long, shapely, athletic legs. She calls a friend to tell her the verdict, and does a POV about why she needed the cast.  Then we see her crutching on campus with a backpack on for extended cast talk about life as a college student on crutches.  There's a ton of cast talk, POV shots and toe wiggling in a couple of different scenes on campus, and some light hopping before she takes a break to study.  Lastly, she crutches back to the doctor's office before reemerging with two flip flops on, all healed.  A wonderful cliu\p from CCC.


Red with Blue LLC, 31.5 mins (c. 2012), This, too, is an unedited director's cut.  The clip begins with an athlete laying face dwon on the ground in pain clutching her leg, immediately lamenting "oh it's broken" and calling for the athletic trainer.  This portion is unedited so there's lots of whining, pain, and writhing about her injured and what she thinks is broken left leg.  Eventually she painfully rolls to her back clutching her leg for more dialogue and painful lamenting about her leg. We then see the athletic trainer air splint her leg from her POV, before we see her clutching the air splint encasing what is assuredly her broken leg hoping the ambulance will arive soon saying she needs to "get out of her" and that her leg is "broken" and "it hurts" over and over.  The clip picks up with this gorgeous, athletic college student-athlete crutching into her town house with a red and blue (at the top) full leg cast that goes way up under her shorts and leaves just her red painted toes free.  She has a positive attitude despite the pain and huge cast and she calls her mom to tell her about how her day unexpectedly went and how she has a full leg cast on. Later she shows us how she hops up the stairs and how she slides on her butt down them before we pick up with her headed to campus for her first day in a cast and crutches.  She is a fluid crutcher who despite a backpack crutches gracefully all around campus.  She takes two stops to tell you first about how the injury happened and the whole process, and then second about how the cast feels, what it was like to get on since it's her very first cast.  She continues crutching around campus and talks about how hard it is to not put weight down or be able to bend her knee dealing with this cast.  We pick up later with sweatpants over the cast, but her bare toes and casted foot still sticking out as she discusses more about life in the cast.  She is really chatty about the attention she gets, positive and negative, and support she's had from friends and teammates.  We then pick up with another campus clip with her cast in full view reaching up to her shorts now heavily signed. She talks a lot about how she gets in and out of the car, does a POV clip where she shows off her cast and talks about some of the signatures. She also talks about and wiggles her toes sticking out of the cast, and talks about how the cast has loosened slightly overtime and become grungy and dingy.  She later crutches back to the car where she again gives a tutorial on getting in.  She reemerges and crutches into her place, going up and down the stairs again, and talks about how excited she is to be getting her cast off.  The clip ends with her returning, still on crutches, but just barefoot and non weight bearing having had her cast taken off.  A very realistic LLC shoot.
You will get the following files: