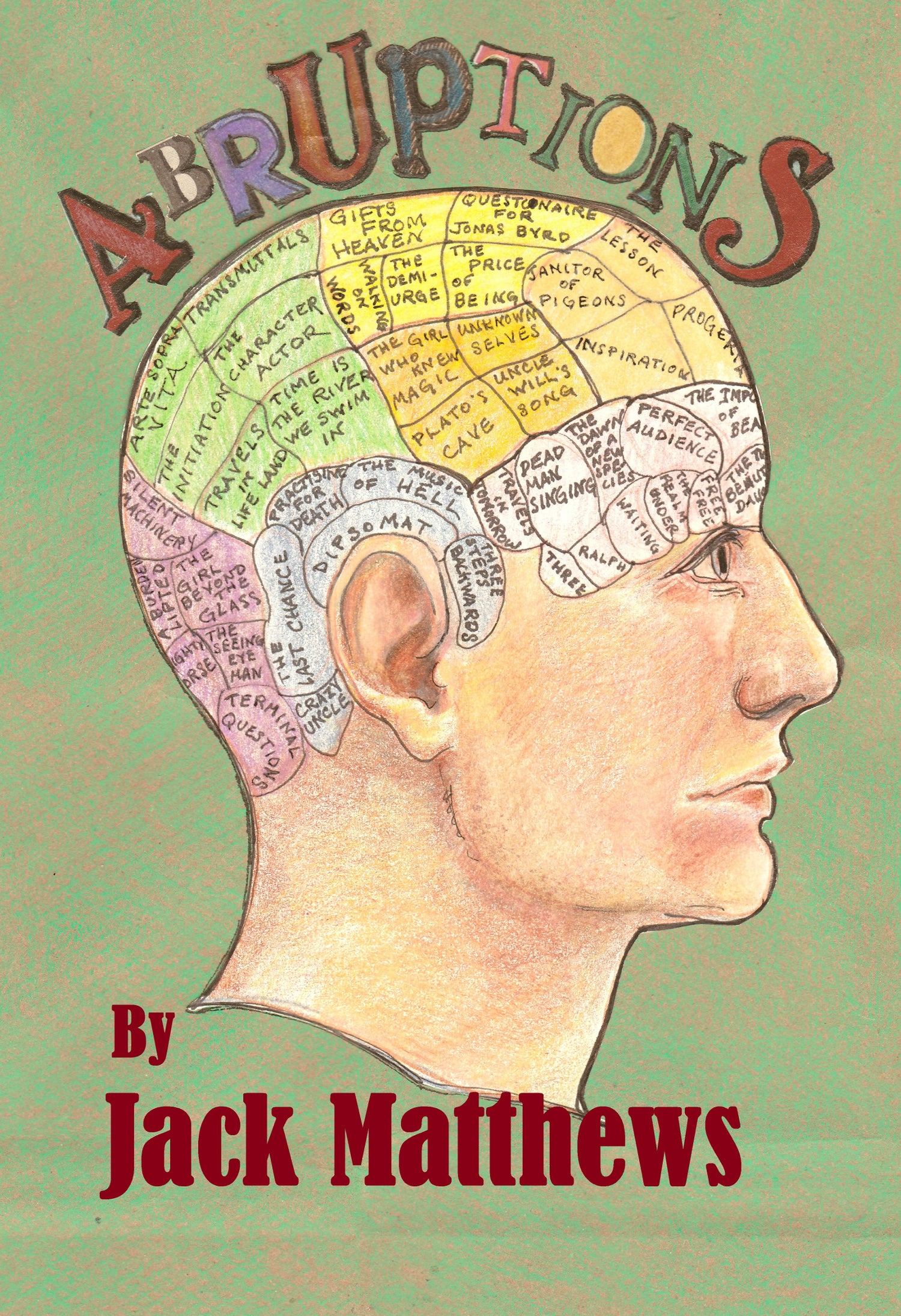 During the last decade of his life, author Jack Matthews wrote a series of 1-2 page prose pieces (which he dubbed "Abruptions" or "very short stories that end abruptly").

Matthews had already published over 20 books of fiction with an astonishing variety of characters and plots. This last volume hints at a lot of characters and plots without trying to resolve them.
Each abruption -- which rarely takes more than 5 minutes to read -- shed light on something unexpected, whether it be a character's view on life or the reader's notions of how the world ought to work.

Many episodes read like contemporary fables or sketches of quirky people from small midwest towns. Two older women have a long-running feud about what flowers should go on the fence between their houses. An actor makes a living out of playing the bad Nazi in movies. An owner of a movie studio in the 1930s throws out any audience member who misbehaves during a movie. An office worker is distracted by a pretty woman washing the outside windows.

Other stories sound like wild fairy tales. What if one superintelligent Siamese twin were conjoined with an idiot brother? What if a witch's curse caused every third word uttered by a person to go unsaid? What if a woman has terrifying dreams about a missing watch?

Some stories simply ponder the imponderable. Why do certain memories persist or reappear? Why do elderly people become set in their ways? Why do people become blind to certain things?

Matthews explains in the book's preface that abruptions "can reach down to dimensions of wonder and speculation that are commonly thought to be the proper domain of poetry." These stories are a fitting coda for Matthew's career as a storyteller. As deep and dark as these abruptions can become, they are told with simple language, flashes of humor and a sage's sense of wonder and irony.

***********************
The entire book is a polished series of provocative concepts told from the depths of the human mind. The sensibilities of this literary journey are sweeping. It comes at the reader with a rush, unchained by any rules, free as a songbird. The concepts are also stripped of any desire by the author to impress. Many are the quiet rhyme and rhythm of the mind, the things we effortlessly conjure up and pass by without acknowledgment. (US Review of Books).

Abruptions is equally mesmerising and frustrating. It is often necessary to re-read several paragraphs, or even the whole story, in an attempt to glimpse the author’s intent. Perhaps it isn’t meant to mean anything at all; instead, this is a compilation of observations of brief moments in his character’s lives. So one reads slowly, attempting to savour each word in the hope that the story survives more than a page or two. But where Matthews hits the mark—and he often does—it is a joy.(an Amazon review)

Read more about the ebook at the author's website.