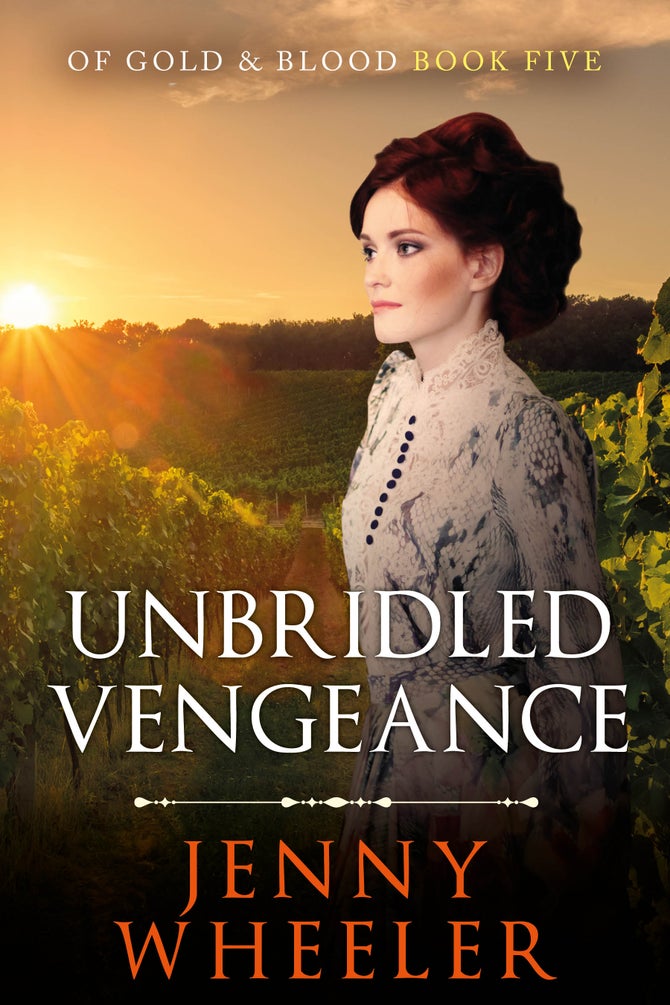 By Jenny Wheeler Books
Unbridled Vengeance is Sacramento rancher Caleb Stewart and his French neighbour Madeleine Laurent's story, and is Book #5 in the Of Gold & Blood historical mystery series.

Caleb Stewart has battled natural disasters and legal challenges to secure his family's land claim, and he is finally free to court the French beauty next door. But he’s forced to push his feelings aside when his own hacienda becomes the scene of a suspicious double murder.

Madeleine Laurent hopes a fresh start in America will help her forget painful memories. But even though her homicidal husband fled and vanished, she’s still legally bound to a man who’s likely dead. So she’s shocked when he reappears with a false name, stirring up trouble as the local lawyer’s hired muscle.

Threatened into silence, she bites her tongue despite knowing that the truth of her husband’s identity could clear her kindly neighbor of blame. And as the trumped-up case grows, Caleb fears he’s running out of time to discover the real killer before he loses his ranch and his freedom.

Can Caleb and Madeleine unmask the true culprit and build a new future together?

Unbridled Vengeance is the fifth book in the charming Of Gold and Blood historical mystery series. If you like suspenseful twists and turns, vivid 19th century Californian settings, and a touch of romance, then you’ll adore Jenny Wheeler’s captivating tale.