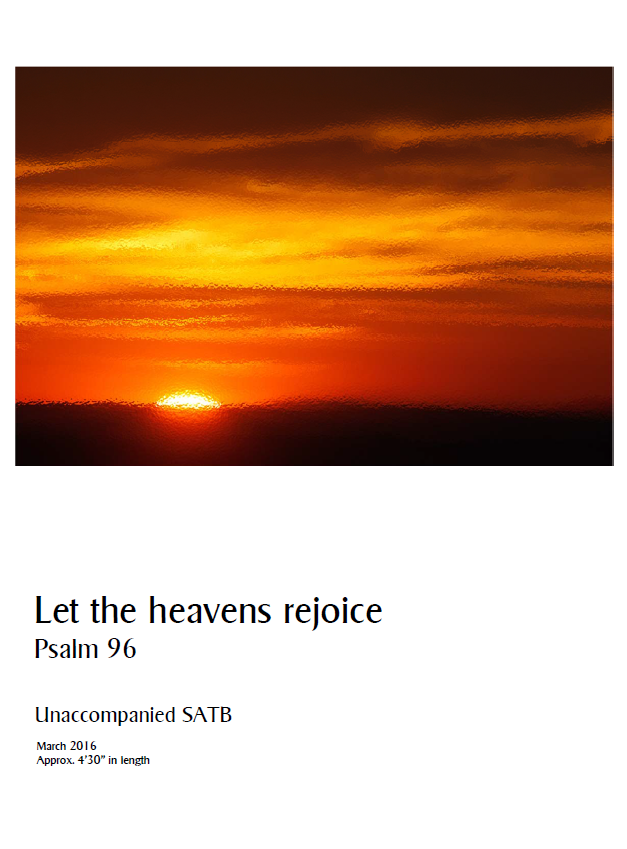 Rejoicing, singing, celebrating and glory are reflected in this setting of Psalm 96. It has been designed to be powerful and emotive, captivating and accessible to audiences. Stage whispered, rhythmic opening statements set the scene – first in unison, then homophonic as their power increases. The section grows in complexity before the powerful refrain of “Let the heavens rejoice” makes its debut, a complete contrast from the (comparative) simplicity before. The next section sees a mixture of pedal notes, homophony and polyphony as the texture grows, before a more complex version of the refrain. Amongst the passion found here, there are also some slower moments for reflection before the tempo of the refrain kicks in again. The final lines of the Psalm, a coming together of all, are reflected similarly in the music where two previous melodic phrases are combined. As the psalm draws to a close there is a slower, reflective movement before the final phrase harks back to the joyous beginning of the piece.

Let the heavens rejoice is approximately four minutes in length and was composed in Feb/March 2016. The text used is edited from the King James Version.

Notes for choral directors
The dynamics and articulations given are guidelines only. The composer is happy for you to alter them to create your own interpretation of the piece.