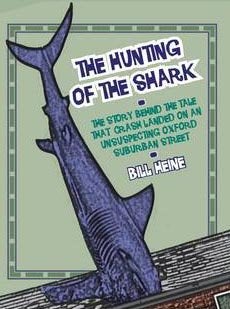 The Hunting of the Shark: The Story Behind the Tale That Crash Landed on an Unsuspecting Oxford Suburban Street

Book: The Hunting of the Shark: The Story Behind the Tale That Crash Landed on an Unsuspecting Oxford Suburban Street - Bill Heine.

"It's 1986 and American jets take off near Oxford to bomb Tripoli and take out Gaddafi.... meanwhile another missile has crashed through the shattered tiles of a quiet Oxford suburban home. This is a true story. Dive into this book which celebrates the 25th anniversary of one of England’s quirkiest icons. The Hunting of the Shark spills the guts for the very first time on how this bizarre 25-foot fibreglass sculpture was conceived, constructed, erected and kept up on the roof against the full blast of Oxford City bureaucracy. Told by Bill Heine who commissioned its birth, plus exclusive sketches and artwork from the sculptor's own notebook and never-before-seen photographs of the erection in flagrante, The Hunting of the Shark reveals and re-lives a fascinating slice of English eccentricity. Part-Picaresque, part-Pythonesque, this tale of art, anarchy, and architecture reveals how a 7-day wonder became one of the country's most controversial landmarks with a 6-year planning battle, courtroom drama, arrests, a Public Inquiry, and the intervention by the Secretary of State for the Environment. With cameo appearances from Michael Heseltine, Lynda Lee-Potter, Lord Palumbo, Philip Pullman, Mohamed Al Fayed, Bernard Levin, Sir Hugh Casson and others, this is a must read for those who enjoy a jaw-dropping tale in which truth is stranger than fiction."