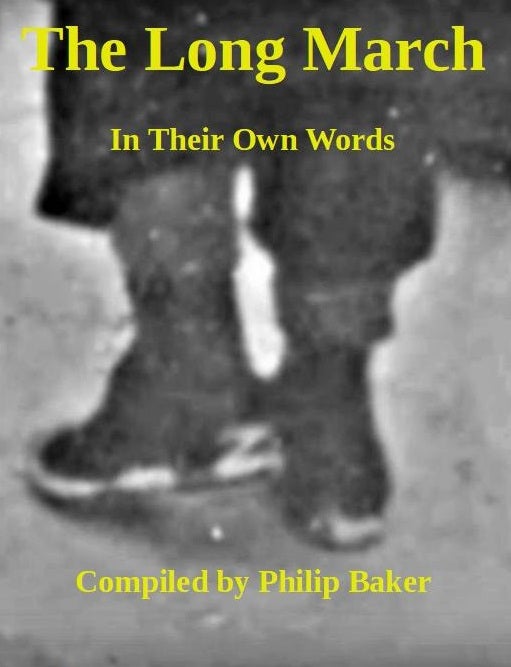 The Long March In Their Own Words

In the second half of January 1945, during an extremely severe winter, the Germans began evacuating the occupants of many of their prisoner-of-war camps, away from the Soviet forces that were advancing from the east.

The reasons for this evacuation have never been made clear. It is certainly true that the Geneva Convention stipulated that POWs should be moved away from theatres of war; but of course, this evacuation would be moving them from the eastern front to the western front, one theatre of war to another. It is thought by some that the Germans might have believed that they themselves would be dealt with more humanely by the western allies than by the Soviets, particularly if they delivered the POWs safely to the British and American forces that were advancing from the west, and not having let them fall into the hands of the Soviet army. Another theory is that the Germans thought they might be able to use the POWs as hostages in any bargaining that might take place with the allies, though this never happened.

Whatever the reasons were, the order came from on high and the men were marched out at short notice, in terrible weather, not knowing where they were going (and the accompanying guards didn't know either) inadequately clothed and fed, and inadequately housed en route during the more than three months of the march.

While allied troops were making successful and ultimately triumphant progress from west and east, hundreds of thousands of POWs were progressing, against their will, around Poland, Czechoslovakia and Germany from January to May 1945. Nobody knows the exact number, nor how many died of the cold, malnutrition, sickness or ill treatment. Nor was the experience the same for all of them. For some it was a more-or-less continuous march from beginning to end. Others were made to stop at camps or other places along the way and formed into working parties. Some covered part of their journeys by train, some escaped and the luckier of those who were sick were taken to hospitals.

Stalag 344 at Lamsdorf was one of the largest of the German camps, though many of its POWs were located at hundreds of Working Parties scattered in a wide area around the camp. In the year or so before the March began, many Lamsdorf POWs had been transferred to Stalag VIIIB Teschen, just over the border in Czechoslovakia, which also had a considerable number of Working Parties. This meant that there were many starting points for the March; and there were many finishing points too.

This book presents the words of some of the men who actually took part in the March. Some kept diaries at the time, others wrote accounts later. These are some of the most authentic descriptions of what actually happened, from the time that they left those camps until they finally arrived home, months later. You will read some harrowing accounts of what the men had to suffer, but also stories of great courage, determination and resourcefulness, as well as a surprising amount of fairness in how they judged their captors and other German people whom they encountered.

This Long March has for too long been an almost forgotten part of the history of the Second World War. As John Weeks, one of the POWs on the March wrote: “Very few people seem to know anything today of this brutal and cruel march and I've never heard it mentioned since, but I know it all took place as I was there. I've never been able to understand why it was necessary, who ordered it and why did they do it? I do know that the conditions we had to bear and the cruelty we were subjected to must have gone against everything laid down in the Geneva Convention to protect prisoners of war. A lot of lives could have been saved if we'd have just stayed in Stalag VIIIB. It was a brutality that I feel was totally unnecessary.”

It is hoped that this book will help to raise awareness of these events of January to May 1945, so that what these brave men endured will in future be properly remembered and honoured.

This book is dedicated to the memory of all the Prisoners of War who endured the Long March of 1945 and especially those who never reached home.
You will get a PDF (3MB) file