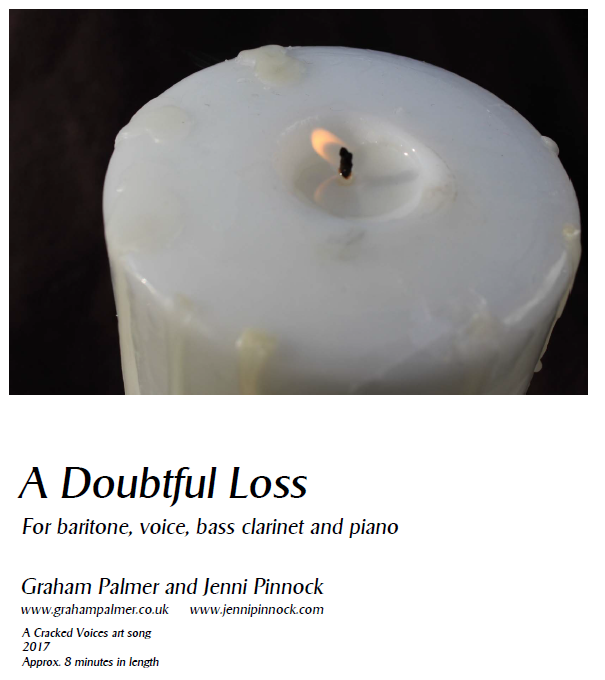 On Sale
£1.50
£1.50
Added to cart
Preview
A Doubtful Loss is an art song from the Cracked Voices song cycle, set for baritone, additional voice, bass clarinet and piano written by Graham Palmer and Jenni Pinnock.

The hermit Lucas is dying...about 25 years ago, he excluded himself from the world, and has continued so ever since. During that time he has lived literally in sackcloth and ashes, never wearing any clothes beyond a blanket, and totally ignoring the use of soap and water. Some years ago the late Charles Dickens paid this notorious character a visit...


James Lucas was a highly intelligent man who lived a secluded life at Redcoats Green near Hitchin. Although the term had not yet been coined, he was almost certainly a paranoid schizophrenic.

Believing that his brother was responsible for his mother's death and was plotting to kill him, he had shut himself up in his country house, barred its windows and let it slowly rot around him. In time the ruin became a tourist attraction with people travelling from far and wide to stare in at the ragged man and snidely comment, 'Does it do tricks?'

When he visited in the summer of 1861 Charles Dickens came away with a less than favourable impression of The 'Hertfordshire Hermit'. Lucas did not suffer fools gladly, especially such a famous fool as Dickens. (The man who was just then earning his money from the serialisation about another strange recluse called Miss Havisham). Undoubtedly, the great writer felt snubbed. He hated the hermit's indolence and, that winter, published a damning account of his visit in a special Christmas edition of his own magazine. Lucas himself never admitted the meeting but was later seen with his own well-thumbed copy of 'Tom Tiddler's Ground'. That piece cemented Lucas's reputation as a man who had squandered both his life and his wealth. On hearing of Lucas's fatal illness, The Times ran the news under the headline, ‘A Doubtful Loss’.

Performance notes
Although this piece is to be performed moderato in general, an element of rubato should be maintained as well – particularly in between phrases by one instrument or the baritone, and where there feels like there should be space in the music. The soprano’s words are to be chanted in time with the baritone’s singing of the same phrase. These phrases, in capitals, are the words of Charles Dickens. There are moments where performers are required to create percussive sounds; these can be done by clicks, gentle claps, taps on stands or music, on the wood of the piano or key clicks on clarinets (only if audible!). The intention is two fold; firstly to sound like scurrying rats, but secondly to help intensify the madness that seems to be setting in in the hermit’s mind at these moments in the piece.
You will get a PDF (604KB) file