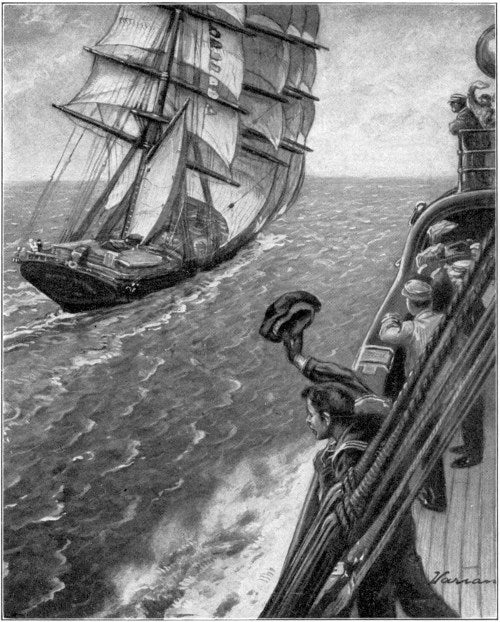 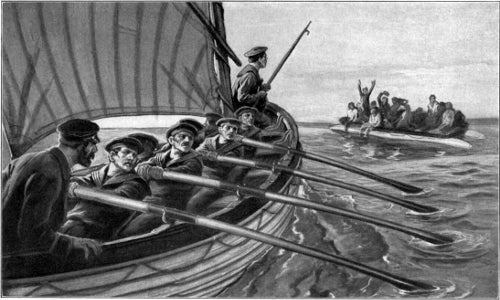 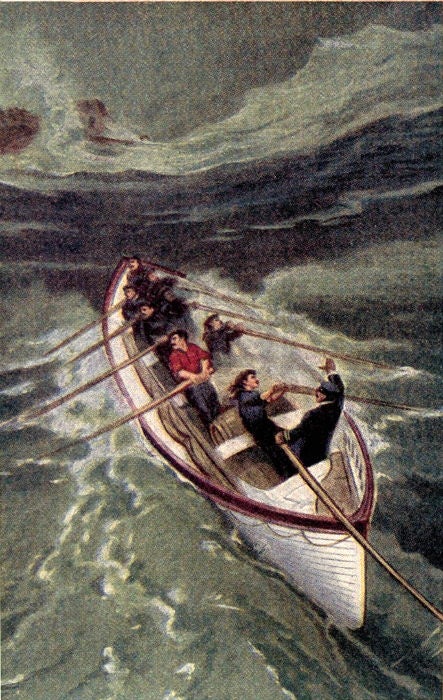 A Cadet Of The Black Star Line 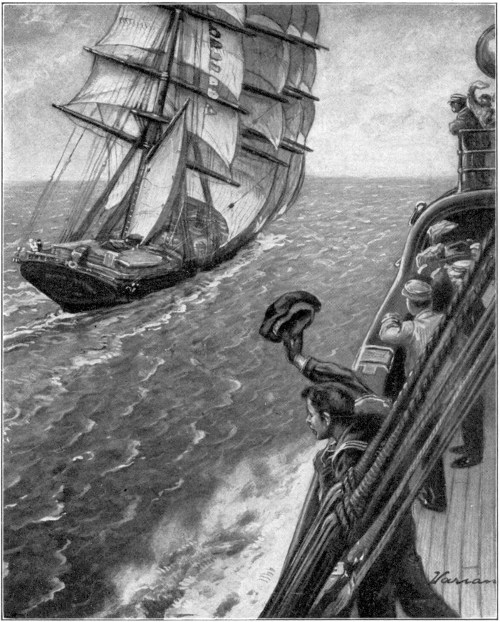 A CADET OF THE BLACK
STAR LINE

CHAPTER I
OIL UPON THE WATERS

The strength of fifteen thousand horses was driving the great Black Star liner Roanoke across the Atlantic toward New York. Her promenade decks, as long as a city block, swarmed with cabin passengers, while below them a thousand immigrants enjoyed the salty wind that swept around the bow. Far above these noisy throngs towered the liner's bridge as a little world set apart by itself. Full seventy feet from the sea this airy platform spanned the ship, so remote that the talk and laughter of the decks came to it only as a low murmur. The passengers were forbidden to climb to the bridge, and they seldom thought of the quiet[Pg 4] men in blue who, two at a time, were always pacing that canvas-screened pathway to guide the Roanoke to port.

Midway of the bridge was the wheel-house, in which a rugged quartermaster seemed to be playing with the spokes set round a small brass rim while he kept his eyes on the swaying compass card before him. The huge liner responded like a well-bitted horse to the touch of the bridle rein, for the power of steam had been set at work to move the ponderous rudder, an eighth of a mile away.

A lad of seventeen years was cleaning the brasswork in the wheel-house. Trimly clad in blue, his taut jersey was lettered across the chest with the word CADET. When in a cheerful mood he was as wholesome and sailorly a youngster to look at as you could have found afloat, but now he was plainly discontented with his task as with sullen frown and peevish haste he finished rubbing the speaking-tubes with cotton waste. Then as he caught up his kit he burst out:

"If my seafaring father could have lived to watch me at this fool kind of work, he'd have[Pg 5] been disgusted. I might better be a bell-boy in a hotel ashore at double the wages."

The quartermaster uneasily shifted his grip on the wheel and growled:

"The old man's on the bridge. No talkin' in here. Go below and tell your troubles to your little playmates, sonny."

Young David Downes went slowly down the stairway that led to the boat deck, but his loafing gait was quickened by a strong voice in his ear:

"Step lively, there. Another soft-baked landsman that has made up his mind to quit us, eh?"

The youth flushed as he flattened himself against the deck house to make room for the captain of the liner who had shrewdly read the cadet's thoughts. As he swung into the doorway of his room the brown and bearded commander flung back with a contemptuous snort: "Like all the rest of them—no good!"

It was the first time that Captain Thrasher had thought it worth while to speak to the humble cadet who was beneath notice among the four hundred men that made up the crew of the Roanoke. From afar, David had viewed[Pg 6] this deep-water despot with awe and dislike, thinking him as brutal as he was overbearing. Even now, as he scurried past the captain's room, he heard him say to one of the officers:

"Take the irons off the worthless hounds, and if they refuse duty again I will come down to the fire room and make them fit for the hospital."

The cadet shook his fist at the captain's door and moved on to join his companions in the fore part of the ship. He was in open rebellion against the life he had chosen only a month before. Bereft of his parents, he had lived with an uncle in New York while he plodded through his grammar-school years, after which he was turned out to shift for himself. He had found a place as a "strong and willing boy" in a wholesale dry-goods store, but his early boyhood memories recalled a father at sea in command of a stately square-rigger, and the love of the calling was in his blood. There were almost no more blue-water Yankee sailing ships and sailors, however, and small chance for an ambitious American boy afloat.

[Pg 7]
Restlessly haunting the wharves in his leisure hours, David had happened to discover that the famous Black Star Line steamers were compelled by act of Congress to carry a certain number of apprentices or "cadets," to be trained until they were fit for berths as junior officers. The news had fired him with eagerness for one of these appointments. But for weeks he faced the cruel placard on the door of the marine superintendent's office:

At last, and he could hardly believe his eyes, when he hurried down from the Broadway store during the noon hour, the sign had been changed to read:

Partly because he was the son of a ship-master and partly because of his frank and manly bearing, David Downes was asked for his references, and a few days later he received orders to join the Roanoke over the heads of thirty-odd applicants. Now he was completing his first round voyage and, alas! he had almost[Pg 8] decided to forsake the sea. He was ready to talk about his grievances with the four other cadets of his watch whom he found in their tiny mess room up under the bow.

"I just heard the old man threaten to half kill a couple of firemen," angrily cried David. "He is a great big bully. Why, my father commanded a vessel for thirty years without ever striking a seaman. Mighty little I'll ever learn about real seafaring aboard this marine hotel. All you have to do is head her for her port and the engines do the rest. Yet the captain thinks he's a little tin god in brass buttons and gold braid."

An older cadet, who was in his second year aboard the liner, eyed the heated youngster with a grim smile, but only observed:

"You must stay in steam if you want to make a living at sea, Davy. And as for Captain Stephen Thrasher—well, you'll know more after a few voyages."

A chubby, rosy lad dangled his short legs from a bunk and grinned approval of David's mutiny as he broke in: