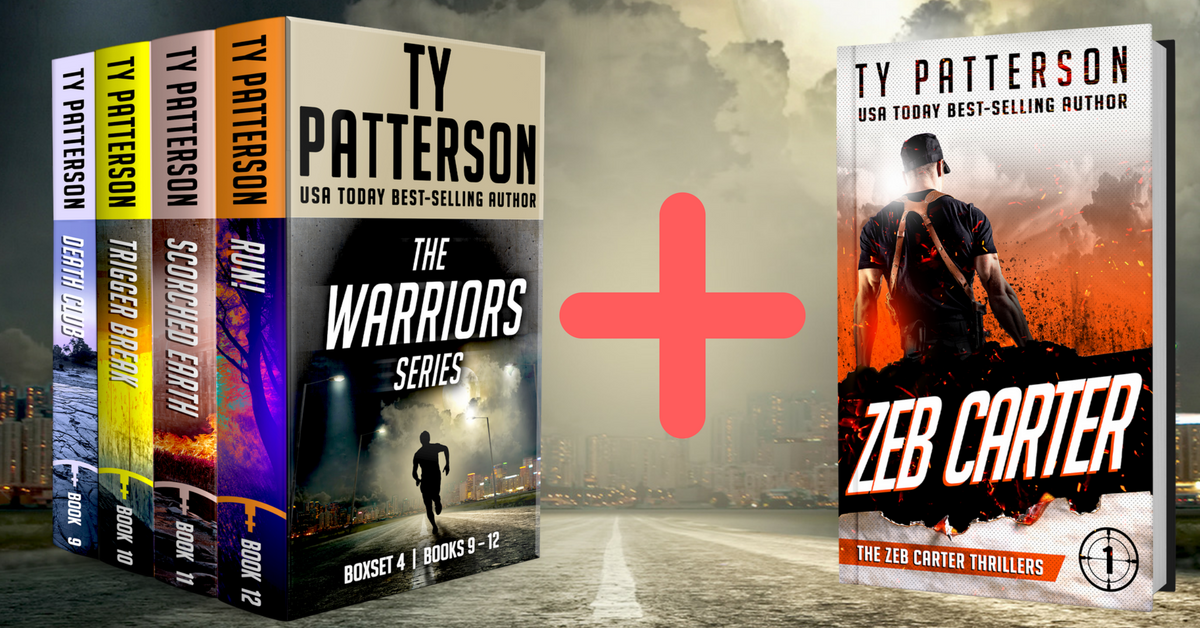 You can't get enough of Zeb Carter!

As if a four book boxset isn't enough of a deal, here's a mega offer:

Five  of the most recent Zeb Carter and his Warriors books.

Download Mobi format for Kindle, ePub for all other readers.

The body in the desert isn't Zeb Carter's business. Just because he found it, doesn't mean he should look into the man's death.

He reports it to the police, and then discovers the dead man was a Special Forces operative.

He gets involved, because a brother warrior shouldn't die in that manner.

His investigation leads him to the Death Club, an underground organization that arranges illegal fights.

Its backers shock him. Their plans - carrying out devastating attacks in the US - horrify him.

To stop them he has to join the club ... and fight the most vicious killers from around the world.

ZEB CARTER VERSUS THE YAKUZA

The world's intelligence agencies are under attack.

The first to be targeted is Avichai Levin, Director of Mossad. His daughter is brutally killed in New York, in broad daylight. The head of the French DGSE is similarly hit.

The Agency springs into action, with Zeb Carter leading the investigation.

A trail that pits him against a Vietnamese execution squad, a London biker hit-team, and takes him to Japan.

To the yakuza. The largest criminal gang in the world.

There, Zeb learns of the true motives behind the attacks. And of an upcoming one, that has horrifying ramifications for global peace.

Zeb Carter has to stop them and prevent the execution.

But no one has ever defeated the yakuza. Not in centuries.

ZEB CARTER HAS TO SACRIFICE HIS FRIENDS IN SYRIA

Zeb Carter goes hunting when two of his friends are kidnapped.

He suspects his enemies are luring him into a trap when the blood-soaked trail pits him against L.A. biker gangs and Mexican drug cartels.

He perseveres, however. Because rescuing his friends is more important than his life.

The trail ends when he reaches war-torn Syria.

There he discovers the chilling truth.

His enemies aren't who he thought they were. The kidnapping isn't what he thought it was.

What they want will destroy his government.

And the only way to stop them is to sacrifice his friends.

When Beth and Meghan Petersen are kidnapped, Zeb Carter goes on the warpath. The trail leads him to Syria where he comes across an enemy who is a master at dealing in death.

The remote wilderness of Idaho has become home to Namir, the most wanted terrorist in the world, who is planning a vicious attack on America.

Zeb Carter is in the same jungle. He has to protect an innocent, stop Namir, and combat the terrorist's newest ally, a Mexican cartel.

But this time, he can't afford to die as long as the terrorists are alive.

THE GENERALS SAID IT WAS A RESCUE OPERATION. EVERYONE KNEW IT WAS A SUICIDE MISSION. ZEB CARTER VOLUNTEERED

Sori. Western military generals shudder when they hear the name.

It is a remote, inaccessible village in Afghanistan, high up in the Hindu Kush mountains. It is where a dreaded Taliban terrorist hides and from where he conducts his murderous raids.

Villagers have a special name for the mountain on which Sori is perched. Mountain of Death.

All attempts to free them have failed. Military operations and negotiations have proved fruitless.

As the terrorists threaten to execute the soldiers, Zeb Carter volunteers to mount a rescue attempt.

On the Mountain of Death, the one person who might have the slightest chance is the man who doesn't fear dying.

'Ty Patterson is up there with Vince Flynn and Lee Child'